So as I’m sure everybody knows by now Steve Harvey totally butchered the end of the Miss Universe pageant last night wrongly crowning Miss Columbia the victor when it was in fact Miss Philippines who won. Unfortunately Steve Harvey’s mistake may have only been the 2nd biggest of the night. I somehow managed to live tweet the entire show right up till the last 10 minutes when I turned it off to watch the season finale of Homeland and missed arguable the greatest live TV moment of all time. I’m not proud of it and as I explained last night on twitter it took a perfect storm of events to cause this blogging tragedy. Here is what happened.

(start from bottom to top) 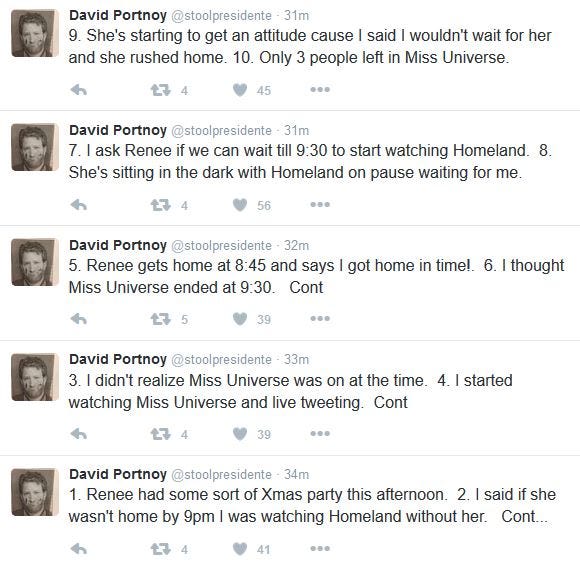 Listen I’m not an excuse guy. I’m not a guy who points the finger. Sure my wife put me in a very uncomfortable position just sitting in the dark with Homeland on pause waiting for me to come watch it. I’m not 100% sure how else I could have handled the situation. I could feel the tension rising in the Pageviews household. Something had to give. I never dreamed Harvey would pull a circus stunt like he did. But I made that decision. So I think Jim Calhoun said it best;

What is clear is last night was unacceptable. It has made me re-evaluate my entire communications system. There is clearly a problem in how I receive critical time sensitive information. I’ve identified the problem and now I will fix it. Just like I fixed my beard dandruff and our twitter account getting deleted I will fix this. That is my pledge to the Stoolies. I will never be caught with my pants down again in such a huge TV moment. I thank all the Stoolies for their support during these tough times. I let you down. It won’t happen again. #GoPresGo

PS – I’m 100% convinced this was a publicity stunt by Miss USA. Just no way that gets fucked up like that. Miss Colombia and the Philippines had to be in on it. How do I know? Well are we at war with Colombia today? We would be if it wasn’t an inside job.