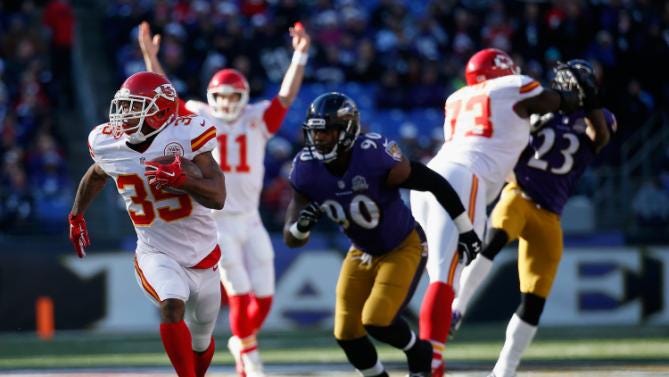 Just another Sunday in Baltimore. Another ugly game has dropped the Ravens to 4-10 and one step closer to that top 5 pick. With the Chargers winning, only the Titans and Browns now hold a record worse than the Ravens. Which puts the Ravens in a mish mash of teams with 4 wins. The good news is that as it stands, they hold the advantage over those 4-win teams via the strength of schedule tiebreaker. But anyway. Some things I saw during yesterday’s loss:

– I have to say this before I say anything else. Those gold pants. YUCK. Maybe it’s fitting that they decided to wear their piss-pants for the stretch run here. I guess that’s fine. I just hope I never have to see them again because they were completely heinous.

– Okay, on to football. Jimmy Clausen… another meh performance? There was some good in there, but the couple of bad plays he had were abominable. But I still feel like there was enough good in there for me to be okay with him as a backup QB. He did throw the pick-6, but that’s no worse than what Schaub would’ve given us. I’m interested to see Ryan Mallett get his shot, and that might come next week. Stay tuned.

– I can’t help but notice that they outgained the Chiefs pretty handily. The Ravens have had a knack of losing these kinds of games this season, and it’s no secret what the cause is. It’s the turnovers. They’ve managed to fall to -15 on the turnover differential department, which is the opposite of what we’re used to seeing in Baltimore. They’re careless with the football and have only managed to pick off 4 passes all year. Marcus Peters picked off his 5th and 6th pass yesterday for the Chiefs. That’s the kind of ineptitude we’re dealing with.

– Extremely disappointing fumble by Buck Allen. For the 2nd week in a row, he’s coughed one up in a terrible spot and has landed himself in Harbs’ doghouse. This was really an opportunity for him to earn himself a name as an impact player for 2016 and he’s literally dropped the ball. He was benched for the rest of the afternoon and rightfully so. Harbaugh says his punishment ends there and he’ll see the field again next week, but it’ll take a while for him to regain his trust again. Terrance West has looked solid in his opportunities and may be in better position to get carries the rest of the season.

– Yo Harbs. The fake punt call. The fuck was that bro? I’m all for keeping the opposition on their toes, and I know we got nothing to lose here, but let’s use our noodle a little bit. It’s almost as if we want to lose these football games………

– The hail mary to Aiken was fun. Just another weird/wild play in a weird/wild season. Aiken has really come into his own. I’ve used Aiken as an example of how much of a joke this decimated WR corps has become, but he’s really shown me something. He’s taken the #1 receiver role by the horns. I’m not sure if that’s his role come 2016, but he’s clearly shown himself to be an asset in the future. I imagine him, Perriman, and Steve Smith (who is still totally coming back) will form a nice trio next season.

– Jimmy Smith went down with a thigh injury in the 2nd quarter and didn’t return. He hasn’t been great this year but he’s still the best corner we’ve got. Who knows if he’ll back for next week. If he’s not, I feel sorry for whoever has to chase Antonio Brown around next week.

– Z’adarius Smith got involved with a pair of sacks, and Brent Urban added the first of his career. It’s good to see some of these young guys contribute, because Doom and Sizzle won’t be around forever. I don’t know if these are necessarily the guys for the future, but these games are a great opportunity for them to show their worth and get some valuable reps. Good job fellas.

– Kaelin Clay continues to impress in the return game. He had the TD a few weeks back, and has been a model of consistency since. I think he’s earned himself at least a shot to win the job next year against Campanaro if he hasn’t already. That is until he gets hurt, or catches a case of the fumbles, or whatever seems to happen every time something goes well for us recently. We’ll see.

That’s all I got. 2 more games. I want to get to 4-10, but I’d be more than thrilled with a win against the Steelers next week that costs them a playoff spot. But don’t get your hopes up. I expect to lose by 4 touchdowns. But really, we either do some serious damage to our top rivals’ playoff hopes or we fall to 4-11 and ensure ourselves a great pick. No tears from me on Sunday.