Listen I’m not saying Jason Day could have necessarily done anything differently last night when Lebron came barreling in on his wife. To assume someone can have foresight in a split second is stupid. But, with that said, he’s fucked. The second Ellie Day wakes up from her coma she’s going to be PISSED. Just look at this pose, this one right here. 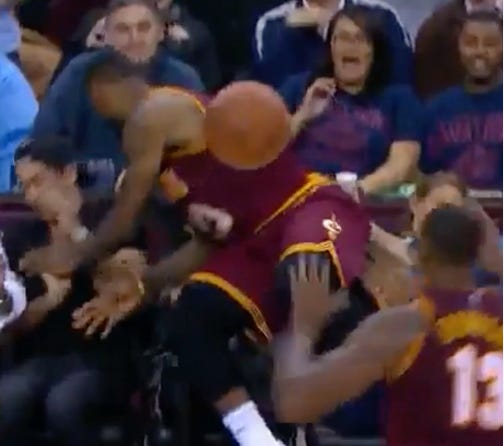 You know what that pose is, where he’s basically protecting himself and not his wife, that’s the “you owe me basically anything I want for Christmas” pose. Jewelry, clothes, cars, doesn’t matter. If you let your wife get smoked by Lebron on national television while you subtly move out of the way, you’re fucked. I imagine Jason Day is just sitting in his house right now furiously googling “how to delete the internet” over and over again. Only realistic play at this point is to pack the kids up and fly to a remote island getaway vacation. Hope you can go off the grid for a month and people won’t mention this when you get back. “Is there a way to keep my wife from ever looking at the internet or turning on ESPN ever again”. That’s a real thought in Jason Day’s head right now. Dude is basically Billy Zane when he pays his way on to the Titanic lifeboat. Save the women and children but most importantly, save myself.