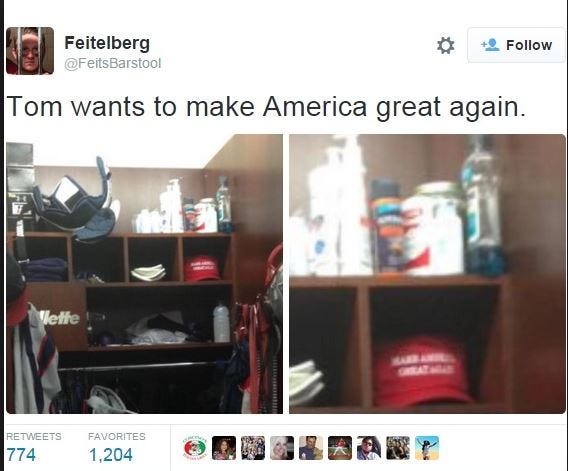 In my America my President flies in a plane with his name on it. Bold, brash, loud. AMERICAN.

I guess somewhere along the line saying you support Trump went from being a cute little joke that moved merch to making you a racist who hates Muslims or something? (At least that’s what resident worst writer on the Internet Samir Kalif said about Brady) Why are people so mad? Because Trump said he doesn’t want to let Muslims into the country? Listen Trump didn’t say that out of racism. He said that because radical Muslims keep killing people and we suck at weeding out the bad apples. Or maybe he does hate Muslims who knows. Bottomlilne is I’ve been supporting Trump from Day 1 and nothing is going to change that. He wants to build walls around Mexico? Go for it. He wants to stop Muslims from coming to the US? Fine. The crazier he gets the more I like it.

All politicians suck. All of them are lying cheats. I want chaos. I want our political system ripped to the ground. I love how Trump keeps saying and doing crazy shit and it only makes him stronger. I’m voting Trump. Brady is voting Trump. Everybody is voting Trump and there is nothing anybody can do or say to stop us. If that means he exports Jews to Iran in a few years so be it. I made my bed and I’m willing to sleep in it. But I’m sick of all the bandwagon Trump fans. You’re either with us or you’re against us now.