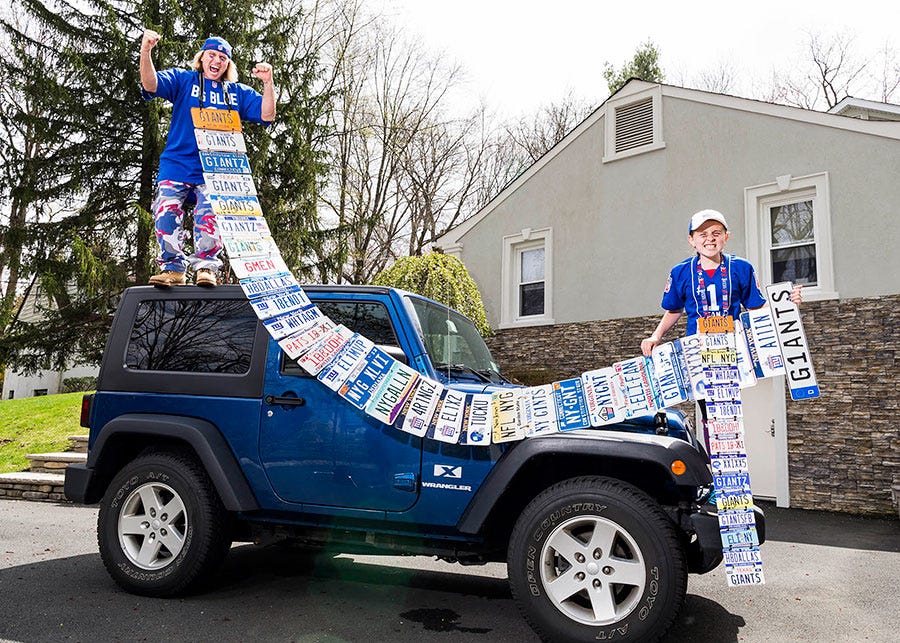 NY Daily News-  Joe Ruback could go from wearing license plates to making them.  The Giants superfan, known to many as License Plate Guy, is facing felony charges following an investigation into organized crime rings in Rockland County.

Ruback, 46, was arrested Thursday morning and charged with running a loan-sharking ring, authorities told the Journal News. His bust came at the conclusion of a 16-month undercover investigation into a gambling syndicate with operations in New York, Pennsylvania and Florida.

“Operation Rock Bottom” led to the arrests of seven other alleged figures in the scheme, and more than $750,000, computers and gambling records were confiscated in the multi-agency investigation, according to the Journal News.

This has been a rough year for human mascots.  First we had Ragnar The Viking lose his job in Minnesota, then we saw Superfan and Detroit Don get their guts ripped out by Aaron Rodgers, which was followed by Fireman Ed stumbling through one of the most cringeworthy speeches ever.  And now it hits me right where I cheer as a Giants fan, with License Plate Guy apparently falling victim to some sting operation.

First of all, let me call a spade a spade and say that many of us Giants fans always believed that License Plate Guy may not have been playing with a full deck.  When your entire persona is based on wearing old custom vanity license plates of an NFL team, some red flags are going to be raised.  Now did I think that there was a chance that he was breaking fingers and tracking down the gambling debts of degenerates that definitely look and bet like Big Cat?  Of course not.  I just thought he lived in his mom’s basement just so he could travel around the country and pay for those ridiculous vanity plates.  Do you know how much those things cost?!? And you have to pay that fee every single year.  Just a rough year for the License Plate Guys of the world.  Mammas don’t let your babies grow up to be human mascots.

Also, color me stupid, but loan-sharking doesn’t seem like that much of a big deal to me.  If you lend a guy some money and he doesn’t pay, he should get his ass beat.  And if he continues not to pay, the punishment you dole out should increase.  That’s all loan-sharking is, right?  To be honest I feel like I don’t have a grip on loan-sharking or money laundering.  Anyway, I stand behind our human mascot, even if he seems like kind of a weird dude.  I want everyone in Big Blue Nation to wear their license plates around their neck on Sunday in honor of License Plate Guy.  This aggression will not stand.  We need him released!  It wouldn’t feel right beating the Patriots in the Super Bowl without him.  #FreeLicensePlateGuy!  #ButFiremanEdStillSucksBalls!

P.S. Don’t really wear your license plates around your neck on Sunday.  You will look like a goddamn dope.