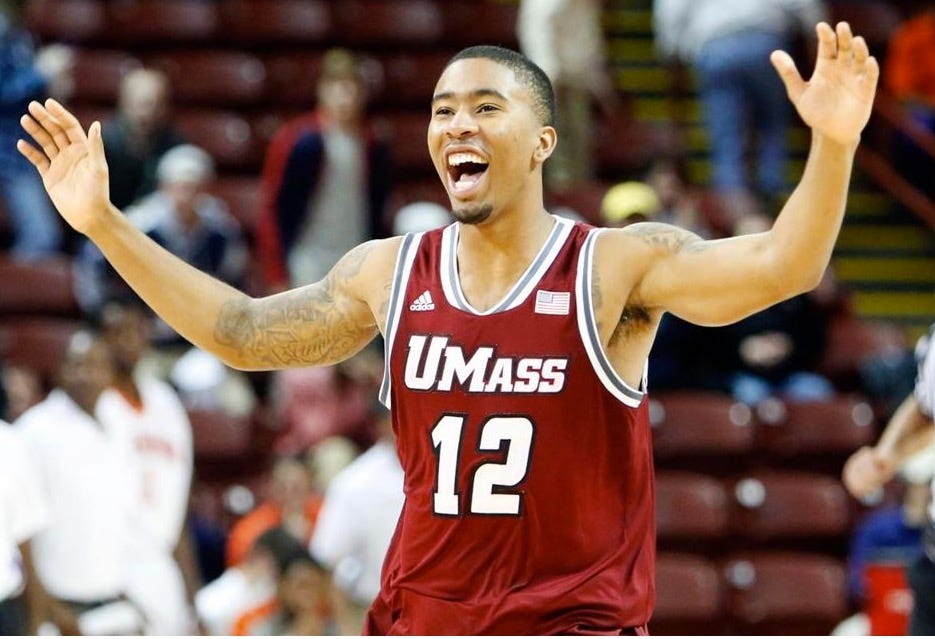 AMHERST – All the fanfare and nostalgia surrounding John Calipari night was good and all, but all Trey Davis really wanted his phone back.

Wait, what? His phone? Yep, his phone. Or, more precisely, his cellular data.

Fresh off a 40-point night in which the senior point guard set a new Mullins Center record for scoring – he passed UMass legend Marcus Camby, who was in the building to help honor his former coach – and came just one point shy of tying the program’s all-time mark in an overtime win over New Orleans, Davis said he’d been working on wifi-only since Sunday.

Davis had his own mother, who pulled the plug on his data plan from afar after her son had a rough game last time out in the Minutemen’s loss at Florida Gulf Coast, to thank for it all.

“Man, my mom turned my phone off after the game we just lost,” Davis, who made 18 straight free throws in Wednesday night’s win, said. “She was mad. Talking about my free throws and all this other stuff.

“She said ‘Why are you missing free throws and all these jump shots?’ So she just turned my phone off and she told me ‘Get it together.'”

Crazy sports moms are the best (not to stereotype but it’s almost always black sports moms, they’re by far the most fun. Sorry if that’s offensive to white sports moms). Always going nuts on the sidelines, hooting and hollering and jumping out of their chair, always wayyy too involved in their business and giving them game pointers, calling and texting after every game giving harsh criticism and analysis. Just loving the absolute shit out of their kid. I mean a lot of people would be annoyed that their mom called them up, yelled at them for losing, embarrassed them about missing free throws, then shut their cell phone plan off. Ballers like Trey Davis use it as motivation to set a school record for scoring.

Davis started off hot and stayed hot against the Privateers, leading the charge as UMass erased an early 10-point deficit in the eventual overtime win. He only made 2 of 8 3-point shots, but didn’t need the long ball to put up a ton of points on a night when he got the line seemingly at will.

Dribbling the ball into the paint as the final seconds of the overtime period ticked away with the game well in hand, Davis rose for one last shot. He was sitting at 38 points and he said afterwards that he knew full well that he could finish at a crisp, clean 40.

He didn’t get the shot off, but was fouled and sank his 17th and 18th free-throw attempts of the night.

And she knows exactly what she’s doing. Knew the exact right buttons to push, so to speak. College kid without a cell phone = no college kid at all. No life. Stripped bare of your most essential possession. Only thing you can do is hit the gym and get 1,000 jumpers up.

Asked if the Calipari night atmosphere was a driving force behind his performance, he was perfectly honest. He really just wanted his phone back.

“First I was mad, but then I just accepted it,” he said. “Now, she just texted me and the phone’s back on. We’re good now.”