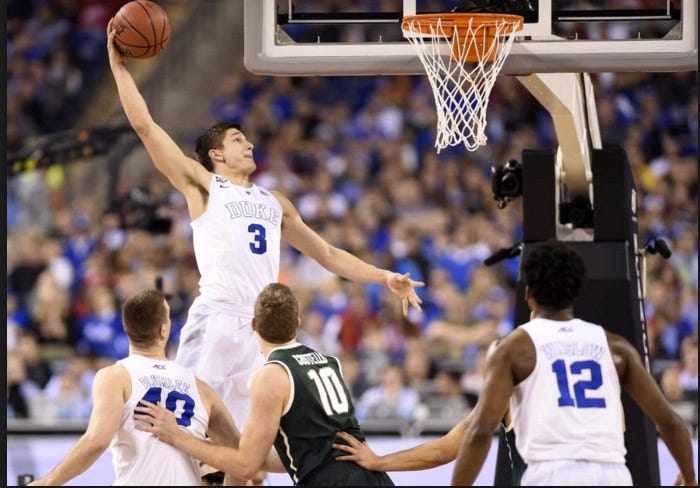 Just a couple more days until the worst week of college hoops is over with. On Saturday we’re graced with one helluva slate. Until then, we have to deal with shitty games while kids take ‘finals’ whatever they are.

So, we opened up the mailbag and got some questions regarding the play so far this season. As I’ve said numerous times, it’s a season we haven’t seen in quite some time with the true definition of parity. This is because the freshman class hasn’t come to form yet while everyone not named Kris Dunn who could have left for the NBA did.

A great question as we get ready for conference play in a couple weeks. We’re a month into the season and who are the MVP’s for each of the major six conferences? We’ll take a look at MVP in terms of simply who is playing the best, not who is most important or projecting the future.

Outside of the Kentucky game, Grayson Allen is absolutely killing it this year. He’s averaging a cool 21.4 points per game – good enough for 17th in the country. His team is obviously winning with the only loss coming to Kentucky. He’s also extremely effective right now, shooting 50 percent from the field and 45 percent from deep. KenPom loves him, being ranked 3rd in the Player of the Year standings with a 1.578 KenPom rating. He’s the go-to guy for Duke when they need a bucket and I expect his scoring will stay close to 20 per a game the rest of the way.

I mean, this is a pretty easy one. Dude is the favorite to win National Player of the Year. Next.

Yes, Melo Trimble is playing extremely well, but Valentine is playing arguably the best in the country. It’s a 2-man race for National POY between him and Dunn right now and until Valentine regresses to the mean he’s running away with this award. He’s playing for the No. 1 team in the country and putting up 18/8.5/7 per game.

The reigning Big 12 POY is looking like he’s going to lock down the award again. The senior from the Bahamas is 13th in the country in scoring with 22.1 ppg, while also quietly getting 5 rebounds per game. On top of that he’s one of the best wing defenders in the country. Much like Allen, KenPom loves Hield, having him 2nd in the POY rankings. He’s currently shooting 50 percent from deep to go along with everything else.

This is the one conference that is completely open to this race. You could make a case for numerous players including Utah’s Jakob Poeltl, but no one is playing better right now than Andrew Andrews (what a name). He’s putting up 21 points and 6.8 rebounds for the surprising 7-2 Huskies. He’s playing 30 minutes a game and shooting 42 percent from the field. I expect this pick to change weekly, but for now it’s Andrews.

Yes, LSU is struggling and people will say Simmons is struggling. But, the dude is putting up 18 points and 14 rebounds a game. That’s unreal for a freshman. He’s leading the country in rebounds and looks like a man playing against boys at times. He’ll get his shit figured out and numbers will look even more like a video game.

There is no chance Henry Ellenson comes back for a sophomore year. The NBA Draft is going to be very weak this year, with a guarantee Ellenson will be a top-10 pick. DraftExpress has him as the number 8 pick right now and that’s about the range he’ll go in. If he waits a year, he’ll likely slip because of how great the class of 2016 is projected to be. He’s putting up 16.5 points and 9 rebounds per game. He’s shown he has range despite shooting a dreadful 27 percent from deep. Most importantly though he’s shown he can play small ball with his ball-handling skills and passing ability. Enjoy him for the rest of the year.

West Virginia had a chance to prove itself against Virginia. They looked great for 20 minutes and then the second half the Mountaineers showed why they aren’t a Final Four contender. They can’t shoot and they can’t score in the halfcourt offense. If Press Virginia isn’t getting up and down the court they look awful. To get to the Final Four, you have to have a guy who can make that jumper for you with the clock running down. They don’t have that. So, I don’t think they are Final Four contenders, likely a Sweet 16 team again.

Most underrated team? Look at the polls and three teams come to mind. Xavier at 10 should be higher, as I’ve discussed before. But, then there’s Purdue sitting at number 9. They are a team that not a lot of people are talking about. I’m a little skeptical of the Boilermakers in the long run because of their shooting and don’t trust their guards. But, the front court is one of the best in the country. The three-headed monster of Isaac Haas, AJ Hammons and Caleb Swanigan are doing a good job of rotating in and out and producing. The schedule has been somewhat easy, but they are 11-0 with games against Butler and Vanderbilt coming up. This team should be talked more on a national level for now.

The third team on the list is Oregon, who has suffered more injuries than any team in the country. Once this team is healthy they have a legit shot at the Pac-12 title. Tyler Dorsey is a name to know.