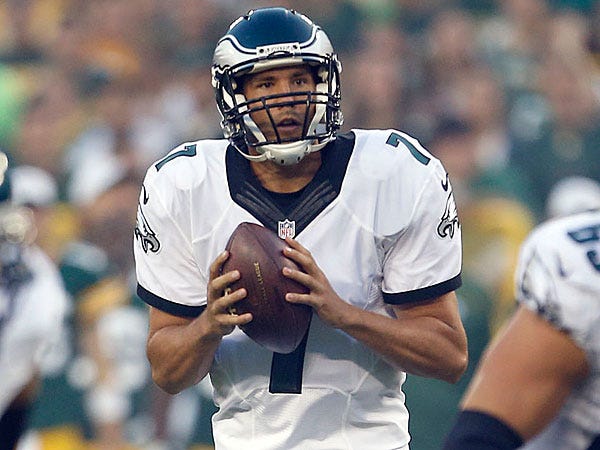 PHILADELPHIA — Just because Eagles coach Chip Kelly wants Sam Bradford to be his quarterback of the future doesn’t mean it’s going to happen. Bradford may not want to stay behind this season. “I’m not really worried about that right now, so I can’t really give you an answer,” Bradford said after Wednesday’s practice.

This really isn’t news, which in turn makes it good news. After Chip Kelly said he likes Bradford and wants to bring him back, Sam says he’s not worried about it right now. Obviously that translates to a “I’m already rich from my rookie contract, bitch, and I’m going to try to slay the rest of the year to get Scrooge McDuck wealth,” but at least he’s being professional about everything. I, for one, would be happy if they brought him back at a non-mega star contract. Just as someone they can have for the next 2-3 seasons to keep everything competitive while Chip’s “Ideal” QB is acquired and groomed. Who is that? I have no idea. But there’s no denying Sam Bradford puts this team in the best position to win in the short term, and good Lord willing, the next decade*- a la Drew Brees after his injury plagued career found salvation in The Big Easy.

*One of two things are going to happen: 1) Bradford signs a mega-extension with the Eagles and his knees immediately shatter under the weight of the imaginary money. Or B) He signs an above average contract with another team and promptly becomes that #1 overall pick, Heisman winning, dick slinger he was expected to be at this level. No inbetween. Why? Because Philly, that’s why.