I actually like Kobe (thank god Dave is away, huh? Admitting to liking Kobe and Lebron in the same day? Grief) but this is when you know it’s time to call it a career, when you can’t even dap up right. Never in my life have I seen the black guy be on the wrong side of the handshake yet here we are. If you can’t run, shoot, pass or dunk then you should probably retire but if you can’t give a sweet handshake then you should definitely retire. That’s a critical portion of the game now with all these young bucks doing their fancy sideline/postgame shakes and dances like schoolgirls at recess. Kobe can’t even handle some rich, old white dude’s shake. The fan goes in like the cool guy, hard high five then transition into the locked fists and Kobe’s the one shaking hands all formal and shit, like he’s meeting the Queen of England. When you’re getting out-cooled by fans then it’s time to just take yourself out of the game.

This guy knew it the second he saw it, too. Devastating look like he just saw his nana break her hip and knew it was officially the end. Kobe can’t even dap up anymore? Yeah, he’s toast. 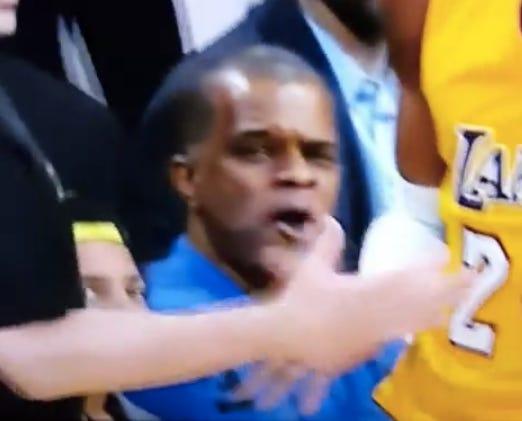