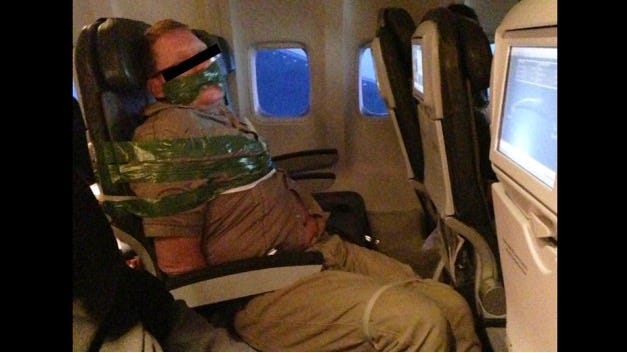 HONOLULU – DEC 14 2016 – A college student in a Honolulu courtroom Monday used a soft voice to recount his drunken behavior on a flight from Seattle to Maui, which included hitting a flight attendant.

“I was not kind and I was yelling obscenities and I was making threats,” Eric Matthew Schneider said of the flight.

He was charged with interfering with a flight crew, a felony, after the FBI accused him of threatening to kill passengers, shoving an attendant and busting out of plastic handcuffs.

In a deal with prosecutors, Schneider pleaded guilty to misdemeanor assault on an aircraft and could receive a sentence of up to a year in jail.

He was banned from flying on Delta Air Lines.

Kind of a scary story to be honest, something it’s tough to point the finger at and get too judgmental when in the back of our mind we know we could very well be that guy. Mess around with a little Xanax for your flight anxieties, maybe some Ambien to knock you out, overdo your dose a little bit and end up throwing back a few too many double tequilas, before you know it you’ve got booze and a copious amount of prescription medication coursing through your bloodstream. Normally you’re a nice polite guy but who knows what could happen under those circumstances? Who’s to say you don’t lose your mind, scream for more drinks, hop up and fight every passenger up and down the aisles, rip out of your plastic handcuffs and throw a flight attendant into the emergency door, whip your dick out and piss all over the walls?

Schneider said he was drinking alcohol before and during the flight. He struck a flight attendant while flailing his arms as he was being restrained in plastic handcuffs, he said.

It was about two hours into the flight when an intoxicated Schneider became verbally abusive toward passengers and challenged crew members to fight, Assistant U.S. Attorney Tom Brady said.

One of the physical confrontations ended with Schneider falling into a passenger’s lap and ripping a galley curtain off its rings, the FBI wrote in a criminal complaint at the time. Schneider had a double tequila cocktail and demanded more drinks, according to the complaint.

He broke free from a set of plastic handcuffs, requiring another set be placed on him, authorities said.

Schneider also urinated all over the floor and walls of a restroom, Brady said.