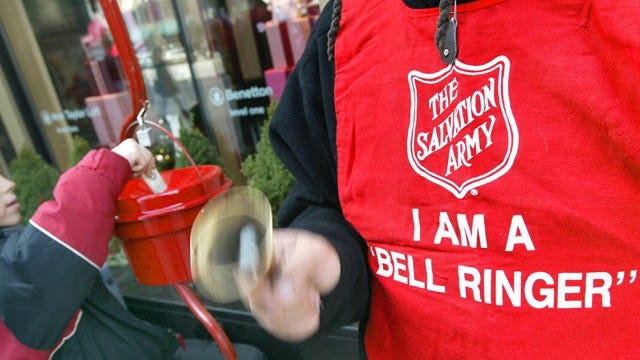 KINGSPORT, TN (WJHL) – Kingsport Police Department officers cited a bell ringer Thursday for indecent exposure at a Tennessee grocery store. According to a KPD report, officers responded just before 4 p.m., where they made contact with a man who said a child walked over to the Salvation Army donation bucket and bell ringer, placed money in the bucket and started to walk away when he noticed the bell ringer lift up his red apron. The man said the bell ringer’s genitals were fully exposed. He told police he quickly escorted the child away from the man and called police. Police spoke with the man, identified as William Martin, 61, of Bristol, who denied any wrongdoing and said he had been working the donation stand since 11 a.m. According to the report, surveillance video indicated that the man at one point appeared to be fondling himself, but said when the man and the child walked up to the bell ringer it was hard to tell if he had lifted his apron. Martin denied he was fondling himself to police at first, but later admitted to the act. Police issued Martin a misdemeanor citation for indecent exposure and he was scheduled to appear in court on Friday at 9 a.m. Maj. Alan Hill of the Salvation Army of Greater Kingsport said, “This man and his wife have been long-time trusted bell ringers who we’ve known for years. He told me he never intended to expose himself, but was dealing with problems related to his severe diabetes.”

Now there’s the holiday spirit! Nothing like decking a little balls, you know, for the kids. Some people may be a Scrooge and say William Martin should keep his Christmas in his pants, but who are we to question how he gets those donations? I don’t care if the Salvation Army is one of the most corrupt, vile organizations that nobody even questions, they deserve that money to pretend to do good every Winter. And we’re going with the ol’ “I have severe diabetes so that’s probably why I took my junk out for a child to see in a public place” defense? Can’t wait to see how well that holds up in court. If anything just say it just needed some air. They can’t breathe in there. It’s inhumane.