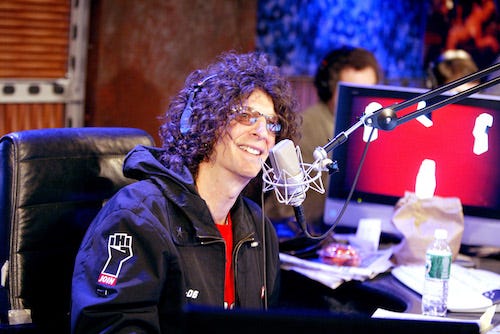 Variety- Howard Stern has struck a new five-year deal with SiriusXM Satellite Radio that includes plans for a streaming video component to augment his four-hour daily radio program.  The famed shock j0ck announced the agreement live on his show Tuesday morning. Details of the video plan were not immediately clear but SiriusXM said the pact includes a 12-year deal giving SiriusXM rights to video and audio material from Stern’s 30-year radio career and a plan “to launch its first venture into video programming with Howard.”

Stern also has a separate pact with Lloyd Braun’s Whalerock Industries to create an Internet hub for all things Stern — a deal that lead to speculation that the radio veteran would pursue a direct-to-consumer option if SiriusXM balked at a rich renewal deal. But SiriusXM’s emphasis on the video component and long-term library rights in the new pact would seem to limit Stern’s ability to launch much of an online service.

I haven’t been able to find the exact numbers of Stern’s contract but I am sure they are somewhere in the trillion dollar range. I remember when he first signed with Sirius as the face of satellite radio and he signed a $100 million contract with a TON of stock options and was blown away that a radio guy could make that type of money.  But he has the audience and gets the kind of numbers to make it all worthwhile.  He is the king of smut radio, while Mike Francesa is the king of sports talk radio, and life is better when those two guys are showing up to work.

Now while I am a fan, I have never been a DIEHARD Stern guy.  I loved listening to him while I was in high school.  But once college and my 20s hit, my goal in life was to sleep as late as possible, so I would never be awake early enough to hear him on the radio.  Plus commuting via subway in NYC wasn’t exactly an ideal way to listen to him.

However, I am part of the generation that grew up watching his E! show, which along with Wild On, got me through puberty.  Nothing like watching Jenna Jameson talk about her sex life for a half hour and then Brook Burke running around in bikinis as hormones rushed through my body before bed.  He also helped blaze a trail for smut bloggers like myself by being such a mainstream figure while not giving a fuck about the censors and whatnot.  So I am obviously happy to have at least the persona of Stern hanging around a bit longer.

Also, Private Parts remains one of my favorite movies ever, despite the awful decision I made in watching it in the theater with my parents.  Mama Looka Boo Boo Day will continue to make me laugh until my last day on Earth.