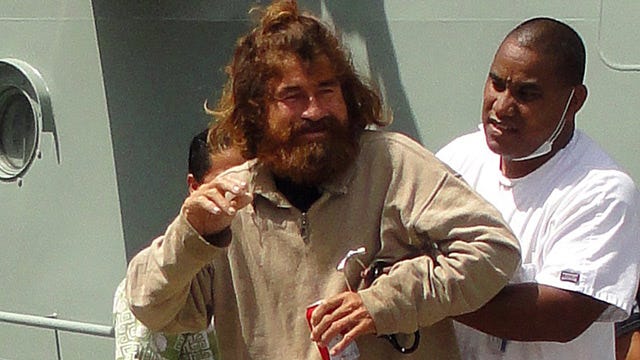 Daily Mail-  A castaway who survived 15 months at sea is being sued for $1million by the family of his dead friend who claim he stayed alive by eating him, it was reported on Tuesday.  Salvador Alvarenga, 36, washed ashore in January last year in the Marshall Islands, in the middle of the Pacific Ocean, after spending 438 days adrift.  He had drifted 6,700 miles from the coast of Mexico, where the boat he and crewmate Ezequiel Cordoba, 22, were sailing in was crippled by a storm.

Mr Alvarenga, from El Salvador, later told how stayed alive by drinking urine and turtle blood and eating fish and birds he caught by hand.  And the tuna fisherman described how, after his best friend starved to death early on, he left the rotting body at the boat’s bow for six days for company.  But the family of Mr Cordoba are now demanding a million dollars (£650,000) compensation after claiming that he was a victim of cannibalism, according to reports.

I hate to be the asshole to point this out, but once your family member is lost at sea, he belongs to the ocean.  If he washes ashore with some other people and a Lord of the Flies situation ensues, that’s just how the game goes.  Is it fair?  No.  But when you go on a boat or on a plane that flies over water, that is the imaginary contract you are signing with God.  It’s basically like in Hangover 2 when they say “Bangkok has him now”.  You disappear from civilization?   We will look and pray for you.  But we also realize that the ocean has you now.

When it comes to whether or not you should eat your friend when you are on a deserted island, I think it comes down to how close of a friend you are.  Like if we send Christmas cards to each other, we are probably too close for me to eat you unless it is EXTREMELY necessary.  If we are “work friends”, I may try to eat you even before all other options have been exhausted.  Desert islands are where Darwinism is on display at its finest.