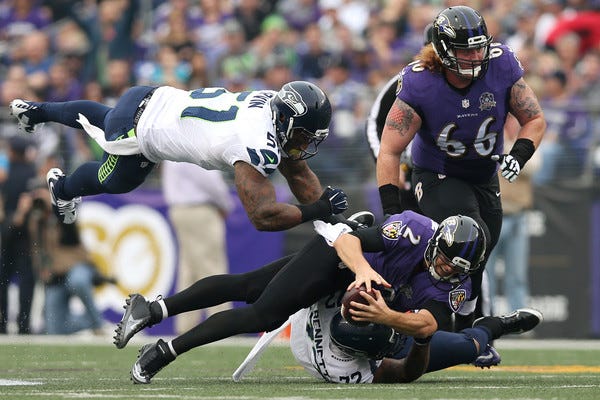 Well there it is. It took 8 years, but they’ve finally done it. A losing season in Baltimore. Had to happen sometime. What was interesting about this loss was that it was the first true ass-kicking the Ravens have taken all season. Every single game had come down to a final possession until this one. And it was evident from the jump. The Seahawks out-classed the Ravens in every aspect of the game. They moved the ball with ease from the get-go, and it took some sloppiness on their part to even make it close for the majority of the first half. Sure enough, Seattle was able to pull away as soon as the Ravens pissed on themselves, and they never looked back. More thoughts:

– Thoughts on Jimmy Clausen after 1 game in Baltimore? Eh… not too shabby to be honest. He faced one of the best secondaries in football and really wasn’t terrible at all. He was spectacular by no means, but 23/40 for 274 and only 1 INT really ain’t too bad given the dearth of talent in the receiving corps and the fact that they had NOTHING going on the ground all day. Clausen made some nice throws, made a few bad ones, but really didn’t make the deadly mistakes that say, a Matt Schaub would make. They should continue to roll with Jimmy because he may be a serviceable long-term backup to Joe Flacco.

– If there was a plus side to Jimmy’s one pick, it was that it gave us Richard Sherman getting yanked down by his hair

– As mentioned just a minute ago, there was nothing going on the ground. 28 yards on 14 carries and a god awful fumble by Buck Allen isn’t going to win you many football games. Supposedly the 28 yards was the 2nd-least in the Harbaugh era. Credit to the Seahawks run D, but we have to be better there. And that fumble by Allen was more than unacceptable. When you make the conscious decision to run the ball to kill the 1st half clock, you have to protect the football, especially inside your own 25. 2 hands on the rock at all times. It looked like the Ravens were going to snake their way into halftime only down 7-3, and next thing you know it’s 14-3 and the Seahawks are off and running. Can’t cough that up.

– Have to say, impressive showing from some of these no-name receivers yesterday. Kamar Aiken has been coming into his own, mostly because he has to, but Jeremy Butler (7 catches for 72) and Daniel Brown (5 for 47) were extremely impressive. Butler especially looked great at finding pockets in the zone and competing for footballs. With the special teams ability he brings to the table, he might be carving himself a niche as a contributor next year.

– Zero receptions from Maxx Williams or Kyle Juszczyzk yesterday. Weird given how Trestman seems to utilize the tight end and fullbacks in his offense. Hoping to see more from those 2 (and Gillmore if/when he comes back) in the coming weeks.

– An interesting shuffle on the offensive line had Kelechi Osemele move to LT and Ryan Jensen start at LG. Osemele played a great game protecting Clausen’s blindside and seemed pretty thrilled about the opportunity to do so. With Eugene Monroe on IR and being the useless turd that he is, maybe Osemele is the long-term option there? He’s a FA this offseason and whether he’d be re-signed as a LG was looking iffy given his price tag, but this may actually be the best formula. A good LT (like we thought Monroe was) is worth investing big bucks on, so getting a look at Osemele at LT is smart. Plus I think Urschel can be a good NFL starter, but at guard and not center. Next year if Zuttah returns, I could see an Osemele-Urschel-Zuttah-Yanda-Wagner line being dominant. Right now the run game will suffer with Osemele on the outside instead of mauling at guard, but it’s an interesting development for sure.

– Defensively the secondary continues to be brutal. Lardarius Webb got his jock tangled pretty bad by Doug Baldwin on a post, and got burnt badly on a play before that. Lardarius is so washed. It’s like watching an old dog ignore the tennis ball you toss his way. They’re trying to revive his career by trotting him out at safety, but the results have been mixed. Dream scenario we draft a corner in the top 5 and never look back.

– In Webb’s defense, this call was a complete fucking joke. Brutally evident that he was doing everything he could to avoid the flag with his face up.

– Here’s an astounding refereeing statistic that I read last week… Ravens opponents have only been called for one offensive holding flag all season. That’s INCREDIBLE. I know the pass-rush isn’t running at full capacity, but there’s just no way the Ravens aren’t getting the short-end of the stick there. Holding happens on virtually every play in the NFL. Do we just need to sell it better? Whatever. I had forgotten all about that stat until I saw this play where CJ Mosley was about to demolish Russ Wilson

That should just about do it for this week. Reminder. Just think about the draft picks. Right now the Ravens are in position to pick 4th overall, and face red hot Kansas City and Pittsburgh teams the next two weeks, and a strong Cincinnati team that will probably still have plenty to play for at home that week. This season now has 4-12 written all over it. 3 more games until the nightmare is over. Stay strong and think about the picks.