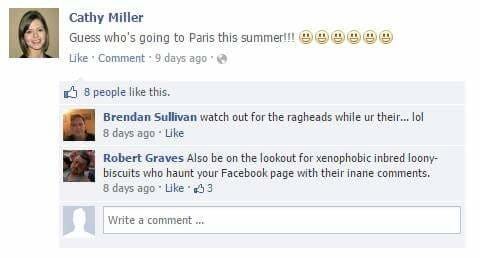 This one went viral over the weekend and even though it’s a long one, it’s worth a read (the fifth slide explaining Brendan’s 5/7 rating for Fight Club is the main one people seem to be focusing on) because it’s all pretty funny. But I have to admit my bullshit detector is going off pretty hard here because these were almost too perfect, like some total wish fulfillment from a Reddit nerd imagining what it would be like to sack up and strike back at those people on Facebook who dare to have opinions different than his. Especially this one: 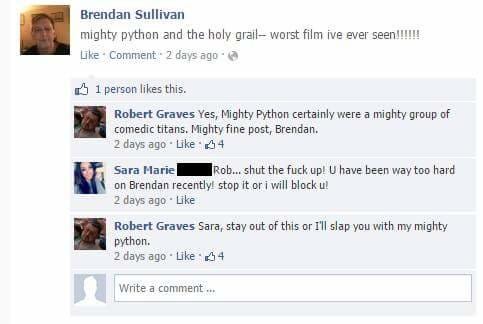 That’s absolutely something some guy with a Big Lebowski Facebook pic would think is charming in a Sean Connery way that would win her over but in reality she would actually block him and then he would complain about how Sara Marie “says she likes nice guys but really doesn’t.” And that’s sort of the overall vibe here as it keeps going on. Some sick burns and all that but this guy was way too in love with his jabs, that Internet atheist mentality where you’ve got to shit all over everyone else because you’re the right one and everyyyyyyone has to know about how much worse they are for not thinking the same way you do. In that respect, this thing is as believable as it gets.

PS If this is real, there are pretty decent odds Sara Marie threw Brendan one just because she felt bad about what a dick Robert was, right? I feel like every other chick would be more like that Cathy Miller one and just completely pretend like she’s not seeing these two Tom and Jerrying their way across her feed but Sara Marie is way too invested here.