I’m asking because even I can’t tell. 18 of their last 20 possible points.. successfully erased the gap after the Caps/Rags started off on unreal runs.. the fourth best record in the league…

All while our star player is currently slumping, they’re giving up 3rd period leads like its nothing, and couldn’t buy a regulation win if they wanted. Yet the points are coming rather by daily highlight reel goals from Okposo in OT. Oh and that night Josh Bailey gave everyone a heart attack via a drop pass.

But let’s start with 51 himself. To be blunt, Frans Nielsen is driving the bus. With Tavares not quite looking like himself of late, Fransie has stepped up and produced in the highest form possible. One of the leagues most consistent [read: underrated] Centers has been steady scoring these past few weeks and currently sits higher than the likes Stamkos, Boedker, and Nash in points scoring.

Heading into free agency this summer, while poised to put up what seems like his dozenth 40+ point year, I just can’t see the Isles letting the Danish Prince walk come July 1st. His career numbers just scream “consistent as fuck.” 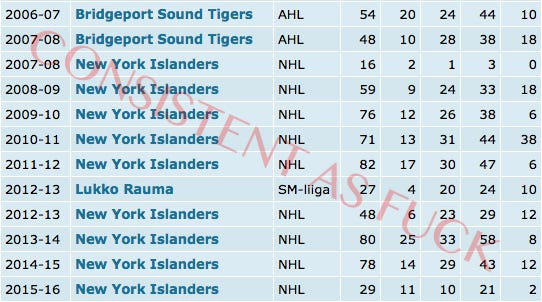 Then theres the fact Jaro Halak and Thomas Greiss are the best goalie tandem in the league right now, and are deservedly the team’s co-MVPs through the first third of the season. Garth Snow continued his rep of making smart, low-risk/high-reward signings by reviving [resurrecting] Greiss Almighty’s career after parting with Pittsburgh. And with both he and Halak top-10 in Goals Against and Save Percentage, the Isles are sitting pretty on the shoulders of both their starting goalies. 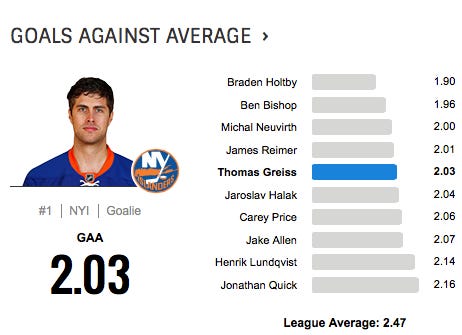 The best[most ironic] part about this all? The Islanders haven’t even looked that good these past few weeks. Makes no sense, I know. But save for Sunday night’s 4-0 win over Jersey, the team has kiiindddd of looked like shit at times, and yet still are finding ways to win and collect points in the process. This team finding its success despite lack of offense from players like Leddy, Boychuk, and a few choice names, makes it hard not to imagine this team and it’s abilities with a few more heads clicking.

2nd in the Division ahead of the Rags who have two wins since Nov 24th, and just 3 points separating the 1st place Caps.. the Metro is a officially a crapshoot, and the Isles are eatin up all the points they can get.

And about the upcoming schedule? 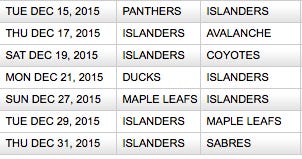 Shoutout to @MichaelPagano for the image