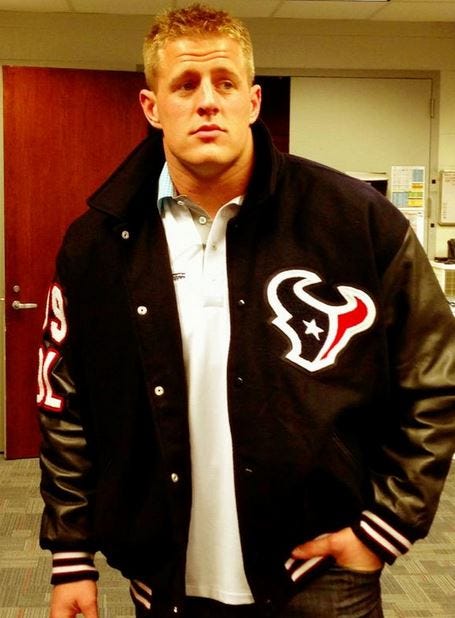 I honestly do not care about tonight’s game.  I wish Gronk wasn’t playing.  I’d run the ball every single play so Brady can’t get hit.   The AFC is a JOKE.   The Broncos STINK.  The Bengals STINK.   As long as the Pats are healthy it’s a literal cake walk to the Superbowl.   Winning these next few games don’t matter.  Homefield advantage doesn’t matter.  All that matters at this point is staying healthy.  So the next few weeks are gonna suck balls.  All I care about is guys getting up after the play is over.  It’s a horrible way to go through life.

Having said all that Gronk is playing tonight and there is no team that that Pats have dominated more over the past decade than the Houston Texans.  The Texans haven’t been the same since they came to New England for MNF back in 2012 with the best record in the NFL wearing their Letterman jackets and we beat them by 200.  Here is what I wrote back then:

“Remember when the Texans were the toast of the town? Wearing Varsity Letterman jackets everywhere they went? People were talking about them having homefield for the entire playoffs last year. Then they came into Foxboro and lost by 100. Then they came into Foxboro again for the playoffs and lost by 100 again. And poof just like that it was the end of the Texans as a credible franchise. It was like Bill Belichick stuck his hand into their chest, ripped out their heart and ate it. These guys have to know the Patriots are the reason why they are where they are right now. For all intensive purposes the Patriots literally murdered them.”

The Texans have been dead ever since.  Combine that with the fact that the Pats haven’t lost 3 in a row since 2002 and I’m pretty sure we got a massacre on our hands tonight.  But again I don’t care about destroying the Texans again.   We’re not playing other teams anymore.   It’s all about Feb 7th 2016.