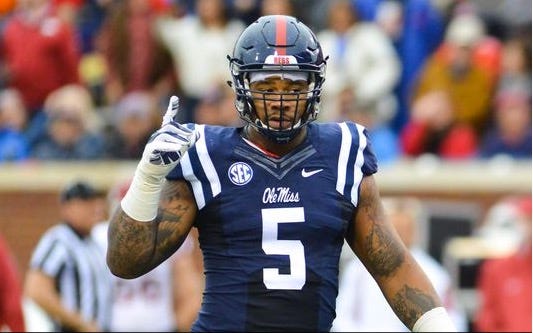 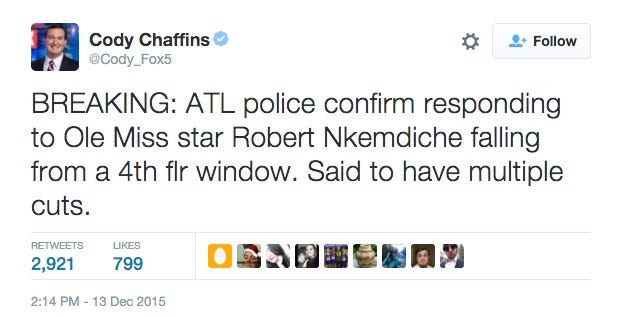 Clarion-Ledger - Ole Miss defensive tackle Robert Nkemdiche fell from a hotel window last night but was conscious and breathing when officers responded to the incident and was in stable condition when taken to a local hospital, according to the Atlanta Police Department.

The Atlanta Police Department added that police found a small amount of what was suspected to be marijuana in the hotel room. GI Squad and a Narcotics Unit responded to the scene with a Crime Scene Unit, according to a report released Sunday afternoon to The Clarion-Ledger.

Damn, if it wasn’t for that pesky marijuana, I would have said this was the biggest blessing in disguise ever – pretty much a guarantee to lock up the #1 spot in the NFL draft. I mean falling FOUR stories out of a window and ending up with “minor cuts”?? For real? I’m not a professional scout or anything, but I think superhuman strength and rapid magic body healing is kind of an important skill set they look for, and you can’t exactly test it to this extreme at the combine. Four stories!* 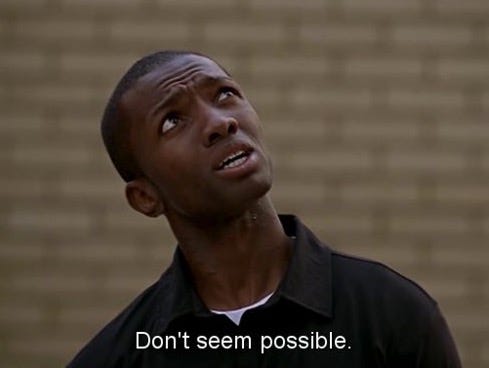 But, the marijuana. That changes everything. We all know how the NFL feels about the evil drug. Nkemdiche was probably better off staying in that hotel room and punching women in the face while simultaneously shooting a handgun into the ceiling than getting caught with a dime bag, draft-stock wise.

Plus, the police report is a little strange.

At approximately 2318 hours, Zone Two units responded to a person injured call where a male had fallen from a hotel room window. Upon arrival, the victim was conscious and breathing. He was transported to Grady Memorial and was in stable condition. Inside the hotel room, units located a small amount of suspected marijuana. The window was also broken out. It appears that the victim broke the window and then walked approximately 15 feet and climbed over a wall and fell approximately 15 feet. GI Squad and the Narcotics Unit responded to the scene along with the Crime Scene Unit. It should be noted that the injured person is Robert Nkemdiche, a football player from Ole Miss.

Combine that with the bong pictures earlier this year…

And the previous incident…

Msn.Foxsports - Denzel Nkemdiche is a linebacker for Ole Miss’s football team who is presently indefinitely suspended follwing an arrest this past weekend for disorderly conduct and disturbing the peace. According to a civil complaint filed on Valentine’s Day in LaFayette County, Mississippi, a year before this arrest Denzel Nkemdiche assaulted an innocent individual who he’d never met or spoken to before at Ole Miss’s Kappa Alpha fraternity house in the early morning hours of February 17th, 2013.

Per the complaint, brought by the high-powered law firm of Burch, Porter, and Johnson in Memphis, Matthew Baird and his girlfriend were at the Kappa Alpha house with their friend Ford Everett. They arrived at the fraternity house at 11:45 in the evening and shortlly thereafter Denzel Nkdemiche and his brother Robert, then a senior in high school and recent commit to Ole Miss, along with five other unidentified football players, identified as John Does 1-5 in the complaint, also arrived at the house. The complaint states that Denzel was friends with fraternity members and had visited the house several times before.

A fight broke out — not involving the plaintiff — and KA members decided to clear out the house. During this time Denzel Nkemdiche was observed ripping off his shirt and screaming, “I’m going to beat that motherfucker’s ass!”

The plaintiff and Everett decided to leave the house when, according to the complaint, without any provocation Denzel punched the plaintiff in the back of the head, immediately knocking him out.

Not content with the knockout blow Robert Nkemdiche and five other football players, unidentified but sued as John Does in the lawsuit, then are accused of kicking and stomping the plaintiff as he was passed out on the ground. Everett, the plaintiff’s friend, dove on the ground and covered the unconscious plaintiff, leading to his also being beaten. According to the complaint, Everett was beaten so severely that his eardrum was busted and his middle ear was severely injured.

911 was called and the plaintiff was transported to the hospital in an ambulance. But before authorities could arrive, the Nkemdiche brothers and the five other football players fled the scene. The plaintiff was knocked unconscious for 12 to 15 minutes and his body began to convulse in a seizure. He was taken to the emergency room where he was treated for multiple injuries, including a severe head injury.

…And you’re looking at quite the first round draft stock fall.

*ESPN updates that it was a 1 story fall.