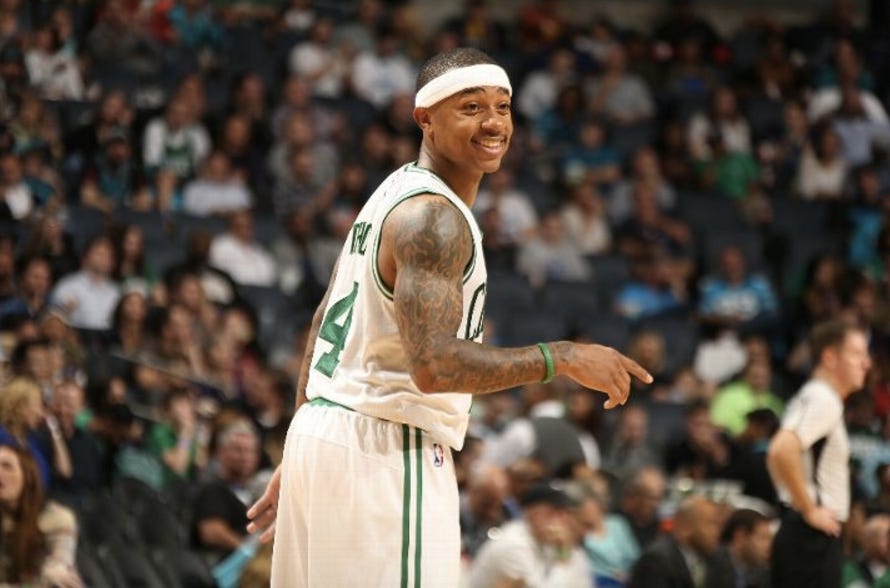 This ladies and gentleman was the definition of mental toughness. Less than 24 hours removed from the marathon that was the GS debacle, the Celtics had every reason to drop this game. Look at what happened to the Warriors, both teams were deservedly spent. I touched on it yesterday, but the Hornets are no joke. Coming into last night they were a 2nd seed in the East, and their advanced metrics aren’t that bad. They sit at 6th in the NBA in defensive rating (101.2), lead the league in fewest turnovers per game (12.1), shoot and make a ton of threes (3rd and 5th in the league), and are pretty solid in defensive rebounding (7th in the league). Incase you haven’t been paying attention, those areas are usually how the Celtics beat opponents, and the Hornets have proven to play the Celts tough, splitting the previous 4 meetings.

In terms of the actual game, it certainly didn’t disappoint. Both teams coming off a back to back, usually in this instance the home team wins. The home crowd makes the difference. But these Celtics are doing something pretty incredible in this regard (back to backs on the road). For example:

Dare I say this is…elite? Just when you want to say that his type of production is not sustainable…they sustain it. Call me crazy, but I feel like the GS game helped the Celts here. You see, in the NBA, teams usually go through growing pains on their way up the food chains. The more situations a group can be in together, the better they get. Look at last night, the Celtics had been in this type of game numerous times this season, and I believe it’s that experience that helped them pull this game out. I mean the last 4 minutes of this game was a punch for punch fight, and as we’ve seen the Celtics relied on their mental toughness to make the plays when they needed to on both ends of the floor to pull out the W. Now we rest until Tuesday when Lebron comes to down for another measuring stick game, but while we wait let’s dive into win 14.

– Avery Bradley is clearly responding to being the first topic of this section, because he had another really strong start to this game. I think we are seeing a little bit of Brad’s strategy with how they want to start games, because Avery has become Mr. First Quarter. AB is having a career year pretty much across the board and last night was another example of his growth. What I loved most was that he didn’t disappear after that opening frame. He got the Celts off to a good start with 7 early points, and then had 16 big time points in the second half (including a ridiculous 3rd quarter). He finished with 23 pints on 9-17 shooting (4-6 from 3) 3 rebounds and 3 assists. We are seeing Avery grow right before our eyes and his 8M/yr contract over the next 3 years is great, great value.

– You can’t mention one Tacoma boy without the other, and it’s safe to say Isaiah more than made up for what some called a mishandle of regulation and OT against the Warriors. Looking a bit deeper, this isn’t the first time he’s done something like this following a game where he “blew it”. Remember that end of game turnover against Dallas that cost them that game in mid November? He pushed the ball, got out of control and had a brutal turnover to lose it. Well, the next game he came right back and had a very efficient 17 point (4-9 from 3) 9 assist performance.

Last night, we saw that same bounce back effort. A 21 point performance shooting 8-16 (2-5 from 3) 5 rebounds 13 assists and just 2 turnovers. His performance in the third quarter was maybe some of the best basketball I’ve seen him play this year. He is such a fun player to watch when his swag level is on a hundred thousand trillion, and that’s what we got. It also marked his second game in as many nights with double digit assists, and he’s averaging 20/5/8 so far in December. Pretty good for a guy who isn’t a “superstar”.

– Don’t look now, but Jae Crowder has been playing fantastic basketball since Thanksgiving. For me, he was a big question coming into the year. He got PAID, and this was going to be the first year of his career where he was going to be depended on night in and night out. Well, he’s responding with a career year. Career highs in 3p%, FTA, Rebounds, Assists, Steals, Points. Since Thanksgiving he’s been putting up a solid 15ppg and shooting 45% from deep (9 games). More importantly, this year he has a defensive rating of 99, so he’s been living up to the hype.

– Speaking of defense, another weird defensive outing last night. Missing Al Jefferson without a doubt hurt the Hornets, but it was interesting to see our best defensive performances come from our front line. Four players had a defensive rating under 90, and three of them were big men. Overall the Hornet’s struggled to shoot the ball, and given the effort that was exerted against GS, this surprised me. I was sure this game would be played in the 100s, simply because of the tired legs. That wasn’t the case.

– I loved the way the Celts took care of the ball. After some costly turnovers on Friday night, they finished with just 5 for the entire game. That’s awesome. When the Celts don’t beat themselves and take care of the ball, we saw what can happen. They had an assist % of 65% which is the magic number for them, so it shouldn’t be surprising that when they don’t turn it over and share the ball, wins usually follow.

– How could you not love that 3rd quarter. Just an insane shooting performance. A 35 point effort, led by 7-10 three point shooting which included a 7-8 stretch. Starting at the 8 minute mark, they scored the ball 5 times, all 5 from three pointers. Avery, Jae, Isaiah were flat out unconscious. Good starts and strong recipes for success, and this Celtics team is starting to accomplish both.

– Even without Big Al, for the second straight game the Celts got manhandled on the glass. They had been 1-27 when getting out rebounded so this was a bit of an outlier that it didn’t cost them the game.  Rebounding simply comes down to hustle and positioning, so this needs to be corrected before it becomes the norm for this team if they have any hopes of competing.

– The bench was relatively quiet. I was a bit surprised to see Brad Stevens rely so much on his starts given the back to back, but you could tell this was a game he had no desire to drop so I get it. The bench has been streaky as of late, and the starters were pretty effective, but you just hope that in games like this your bench can carry you ho=me. You never want your starters to have to win the game twice, and basically that’s what happened.

– James Young didn’t build off his strong play on Friday. Basically was nonexistent, but not terrible. Just sort of blah.

– I’m starting to hate the David Lee back down spin move jumping hook shot. We saw it lat night, and have seen it a few times this season, and frankly it’s just not a move he can make. He’s shooting just 33% when he does this, and when you see it, his body is just moving too out of control and off balance. I now he’s afraid to shoot layups, but just take it strong to the rim and get fouled, because the fade ain’t workin.

– Poor Swedish Larry Bird. Jonas Jerebko is in an all time funk right now and the basketball Gods are giving him zero breaks. A very disappointing season thus far, so everyone please give him some thoughts and prayers to help him snap out of this. We’ll need him.

– It’s sad we didn’t get to see any Zeller vs Zeller last night. Nothing better than two goofy white guys battling each other, especially brothers.

– That first quarter shooting (besides Avery) was stinky. 25%, but it really wasn’t a surprise. Everything was for the most part short, which just showed they had some tired legs. They eventually snapped out of it, but those first few minutes were ugly.

All in all a very big road win against a pretty good conference opponent. With this win, the Celtics are now tied for second in conference wins, and sit at 10-6 (CLE leads with 12). I guess I’ll ask it again here, what happened to the Celtics not being able to compete in the East? And let me save you the classic excuse that the East is bad. You aren’t paying attention. A total of 10 teams in the East are currently over .500, where as the West only has 6. The script has been flipped so far this year, and just as I predicted, the Celts are holding their own against the upper class of our conference.

The real test comes on Tuesday. Cleveland is the last of the Eastern Conference contenders that the Celts haven’t faced and to me this game means more that the GS one. Not only in terms of importance, but this is who we need to be more concerned with how we stack up against. It’s early, and these teams will probably be drastically different when they meet in the ECF, but playing at home, it’s a must win. Lebron will probably Lebron us (he usually does), but he might also sit because he is a giant pussy. The Cavs struggle on the road (5-6), but they will be rested as they haven’t played since Friday. The Celts won’t have an excuse as they will be rested as well, so it should be a good one. In the meantime, to the countdown!