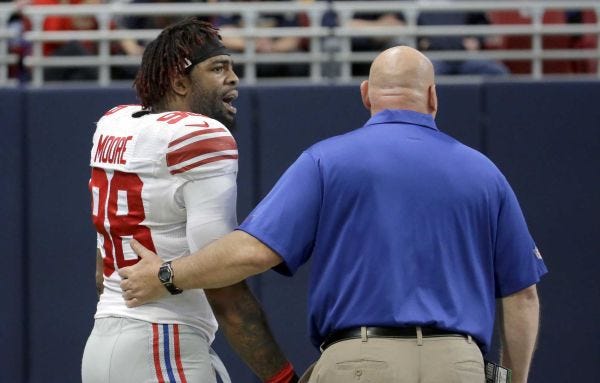 NY Daily News- Disappointing defensive end Damontre Moore, who had yet to live up to the promise of becoming the Giants’ next great pass rusher, was released by the team on Friday for “discipline-related reasons,” according to a team source.

Sources confirmed that Moore was released because he got into a fight with defensive tackle Cullen Jenkins on Thursday, over blue Beats By Dre headphones, as first reported by the NFL Network. Odell Beckham Jr. was distributing the headphones as a gift, according to sources, and several veterans – including Jenkins – tried to grab multiple pairs.

Kind of a surprising move out of Giants camp today. And this only comes as a surprise for two reasons:

1. Moore was tied for second on the team in sacks with three on the season
2. THREE FUCKING SACKS IS GOOD ENOUGH TO BE TIED FOR SECOND ON THE GIANTS AFTER 13 GAMES!

Based on those two eye-opening facts, you’d think that the Giants wouldn’t act rash because of something DaMontre did unless it was pretty bad. Well fighting a teammate because you didn’t get a pair of headphones fits the bill. Toby from The Office got his free Dunder Mifflin robe taken away and he didn’t try to fight Dwight.

The G-Men need to get hot against some very good teams the next few weeks if they want to make the playoffs and cutting one of your most productive pass rushers isn’t going to make things any easier. I can’t imagine Coughlin, Reese and Spagnuolo feel any better about their job security after this move was made. When the Giants landed DaMonster in the third round of the draft a couple of years ago, I thought they had stolen their next defensive superstar. Instead, Moore has been up and down throughout his Giants career and basically devolved into a walking bonehead penalty every time he took the field. Seriously, whenever there was a penalty against the defense the last few games, my first thought was “Oh shit, what did that idiot Damontre do this time?”

Big Blue fans have definitely been spoiled when it comes to having stud pass rushers over the years, but it seems like the well is finally starting to dry up on us. This news, plus JPP being a free agent at the end of the season while battling with the front office the last six months because HE blew off part of HIS OWN FUCKING HAND isn’t going to make things any easier. I hope this isn’t the end of the pipeline of great pass rushers for now, but unless they re-sign JPP, there could be some really scary times ahead for this defense.