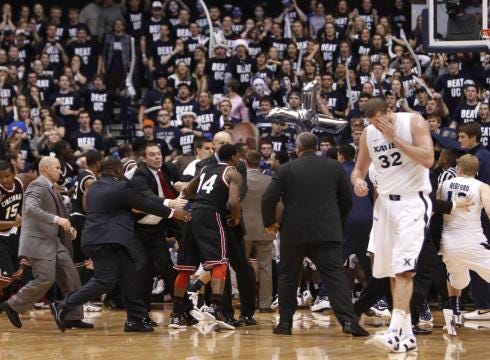 Before we jump into the weekend preview, let’s all pour one out for our homie Trent. If you haven’t heard, go meet Peter King at the restaurant. He’ll tell you that Trent died. Iowa sports. He’ll expect you to cry.

Seriously, that game was absurd. Hilton fucking Magic like you hear about nonstop during Iowa State home games. Jarrod Uthoff looked like Steph Curry in the first half, dropping 30 and looking goofy as shit the entire time. Sidenote, I’m puffing the hell out of my chest after putting him on my All-Big 10 Team in the preseason. But, Monte Morris did Monte Morris things. Mike Gesell couldn’t stick with him in the pick and roll in the second half and Morris hit the game-winner with 8 seconds to go.

Then there was the storm the court. I’m not going to talk about that too much besides the fact college kids are going to act like college kids and the reporter is not up in arms so that says a lot about the situation. If he was pissed then you could make an argument, but he tweeted out ‘Ouch’ and ‘I got my leg tangled up not trampled.’

Onto this weekend. We finally have our first Saturday full of basketball and while it’s not the best schedule, we have some games that you need to watch. The first being a local game for me and one that the country needs to know about.

Note this write up was done before lines were available. Follow me @barstoolreags and I’ll tweet out my picks and general hoops talk.

The Crosstown Shootout returns to campus, where it always belongs. After the infamous brawl a couple seasons back this game took place at a neutral site at US Bank Arena in downtown Cincinnati. However, this year it’s at Cintas Center and both teams are ranked in the top-25. Xavier has been one of the biggest surprises this year, getting wins at Michigan, blowing out Dayton and Alabama. The Musketeers have six guys scoring in double figures, led by sophomore Trevon Bluiett, who is looking more and more like a true NBA prospect. He’s putting up 16 and 8 while shooting 47 percent from deep. He’s big enough to play the four if Xavier wants to go small, with Jalen Reynolds at the five and surround him with shooters. Cincinnati is 8-1 on the year with the only loss being at the buzzer to Butler. This isn’t a typical UC team in the sense that they can actually score. There’s also a ton of depth with eight guys playing 12 minutes a game, which doesn’t even include Quadri Moore who should be in the rotation more. Expect this game to be extremely physical with a ton of foul calls. If Xavier’s frontcourt gets in foul trouble, they are screwed. However, I like Xavier at home in this one.

This is a game both teams need to win with Ohio State at 4-4 and UConn at 5-3. However, the difference is Ohio State isn’t that good of a team. UConn has been struggling a bit, trying to stay consistent and Kevin Ollie not trying to fly off the deep end – again. I don’t see how Ohio State can stick with UConn in this one, the Huskies have to be pissed after the Maryland game and playing at home.

You can’t really talk about playing at home in this game considering Wisconsin lost to Western Illinois and UW-Milwaukee at the Kohl Center. After Iowa steamrolled Marquette, it has been on a roll with wins over LSU and Arizona State. The key to Marquette are the two post players in Luke Fischer and Henry Ellenson. The Golden Eagles aren’t a terrible shooting team, putting up 34 percent from deep, but they need to play inside out against Wisconsin. There will be mismatch between one of those two, likely Fischer with Wisconsin putting Hayes on Ellenson. If Fischer has a big day, Marquette wins.

After Arizona State lost to Sacramento State in the first game of the season a lot of people wrote this game up as a blowout. However, the Sun Devils have rebounded nicely with wins over NC State, Texas A&M, Creighton and Belmont since then. The biggest advantage they have in this game? Savon Goodman, a 6’6” forward. He’s putting up 13 and 8 and will be a tough draw for Kentucky. I would assume you see Poythress on him a decent amount, but there will be times with Murray on him as well. Kentucky needs to keep him off the boards, especially when a smaller player is defending him. Kentucky needs to improve shooting the ball, but more importantly he needs to get run outs for easy baskets. Expect Isaiah Briscoe to look to attack early, especially along the baseline.

This is the definition of a must-win game for Wichita State. You get a ranked team at home after one of the worst starts you could ask for. There’s not many of these games left for the Shockers (hehe Shockers). Fred VanVleet is back for Wichita State, who is their best player. I don’t want to hear anything about Ron Baker as he shit the bed when VanVleet missed time. Utah will look to its big man Jakob Poeltl, especially with no Anton Grady for Wichita State, to take advantage. However, Poeltl often finds himself in foul trouble and I see that happening here. With it being at home and one last chance to make a case for an at-large bid, Wichita gets this one.

The first road game for North Carolina since Marcus Paige came back from injury. Texas is still trying to find its way under Shaka Smart. While I do like what Smart can do in Austin, I don’t see how his team keeps up with UNC, who loves to play uptempo. The Havoc type defense should hurt Texas in this game, because that’s what UNC wants to do. Look for another big game out of Justin Jackson, the Texas native, who is second on the team in scoring. It wouldn’t shock me if this game gets out of hand quickly.

The scary thing about Michigan State? The Spartans will get better once Gavin Schilling is ready to play. I do think Denzel Valentine will regress back to the mean, but getting a guy like Schilling back makes this team a national title contender, again. Florida has been more impressive than I thought when the season started under first year head coach Michael White. But, this game in East Lansing is a tough spot for the Gators.

So, Gonzaga has been struggling. Losing at home to Arizona then playing a closer than expected game to Montana. UCLA is coming off a win against Kentucky. Seems like a prime opportunity for UCLA to grab another win. However, this game is at Gonzaga and somewhat of a rivalry game. The Kyle Wiltjer/Thomas Welsh matchup is going to be highly entertaining because both players don’t look like they should be D1 players and can stretch the floor. The pick-and-pop game will be huge in this one.