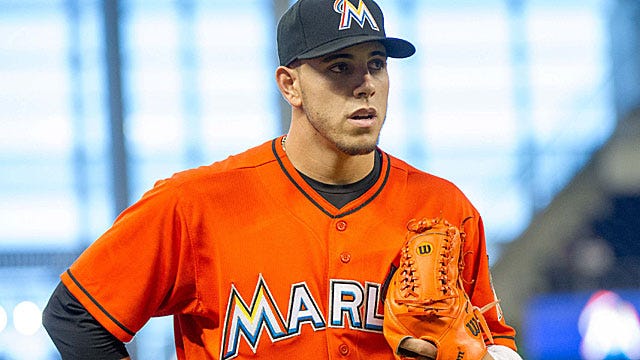 I just spit out my coffee and I wasn’t even drinking any when I read what Peter Gammons reported the Miami Marlins wanted from the Red Sox in order to acquire Jose Fernandez.

“We thought we might be able to piece something together with the Red Sox,” said a Marlins official. “With ERod (Eduardo Rodriguez), Mookie Betts, Christian Vazquez, Yoan Moncada and another pitcher I thought we had something that might work.” Why not?

Listen, I know how great Fernandez is when he’s healthy. I know that if and when he’s traded, everyone is going to lose their minds over what the team who gets him had to give up. But on what fucking planet does this Marlins official live on to think that making that phone call to the Red Sox wouldn’t result in getting laughed at and immediately hung up on?

I’m not opposed to trading Eduardo Rodriguez or Christian Vazquez in the right deal, especially if a superstar like Fernandez is coming back, but it’s more the surrounding pieces that I’m laughing at. Mookie Betts is a star in the making, if he’s not already, and just this past September, we had a major league scout saying, “He’s the closest thing to [Mike] Trout I’ve seen,” about Yoan Moncada.

Any team that acquires Fernandez this offseason would have him under team control for three years — and forget about negotiating an extension, because he’s a Scott Boras client, so you know they’re getting every last dime in free agency. While it’s obvious that I’d love to have Fernandez in that Red Sox rotation, you could certainly argue that six years of Moncada at the major league level, and the five years of control that you have left with Betts, is more valuable than three years of Fernandez, never mind including Rodriguez and Vazquez to the equation on top of that.

And the detail that’s going unnoticed here is that he said “and another pitcher“, so what’s that mean? Henry Owens? Brian Johnson? Knowing them, they’d probably aim for the moon and ask for Anderson Espinoza, Boston’s top pitching prospect at age-17, who’s already drawing comparisons to Pedro Martinez. Marlins gonna Marlin. Can’t hate ‘em for trying, but holy shit, guys. At least pretend you’re trying to be reasonable.