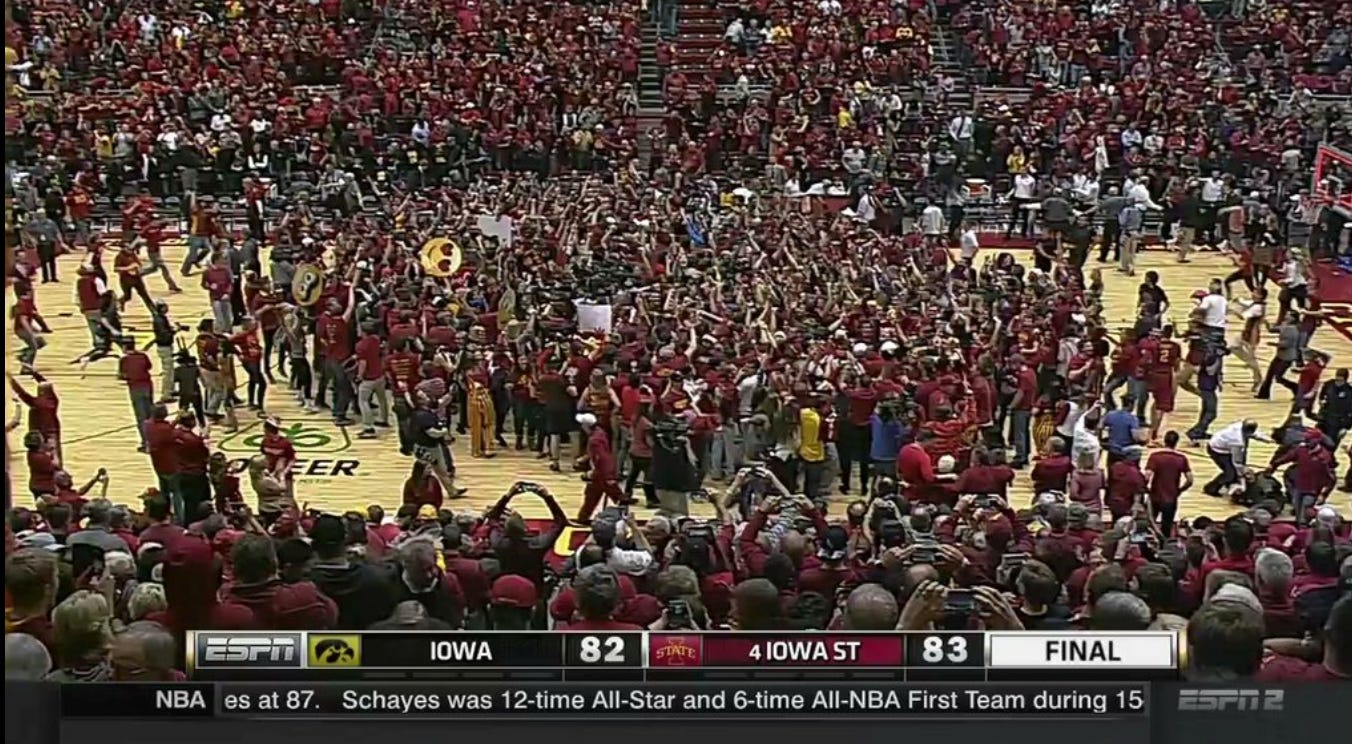 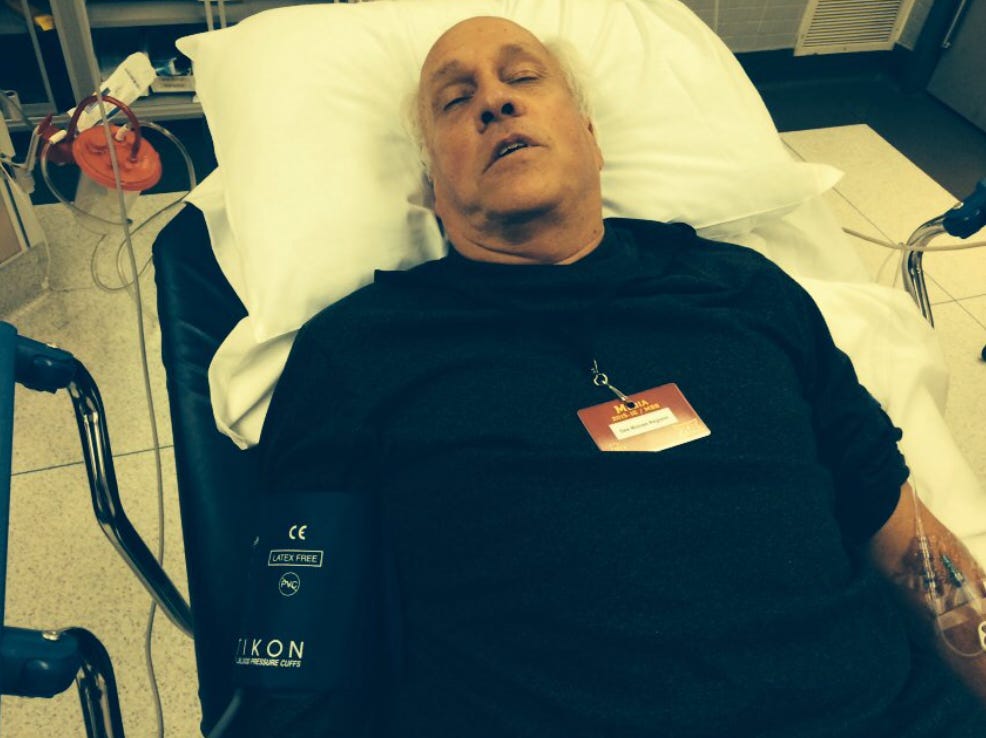 Des Moines Register- Randy Peterson, The Des Moines Register’s columnist covering Iowa State sports, suffered a compound leg fracture during the Hilton Coliseum court-storming after Iowa State’s 83-82 victory over Iowa on Thursday night. Peterson’s tibia and fibia were fractured during the post-game rush, according to former Register reporter Rick Brown, who is with Peterson at the hospital. Peterson was transported from Ames to Iowa Methodist Medical Center in Des Moines. He is scheduled for a late Thursday surgery.

“I hate that Randy got hurt,” Iowa State coach Steve Prohm said. “That’s terrible. But, my thing, I was trying to go see my wife, to be honest with you. It was a great moment. That’s part of college basketball. There’s a picture of when they beat Michigan a couple years ago here. … They beat Michigan and everybody rushed the floor.”

When asked if he thought Peterson’s injury could be used as an example of the dangers of court-storming, Prohm added: “That’s not my decision. That’s part of college athletics. That’s a great moment. Those college kids … they’ve been camping out here (for tickets) for three days. There’s only probably 10 schools that do that in the country. Give them their 15 or 20 minutes to do that. I thought it was pretty cool. I probably should have enjoyed it more, but I was just thanking God I didn’t have to come to this media session my first year and answer questions on why I lost to Iowa.”

“It appeared to be a significant leg break,” Pollard said. “Coach Prohm and I went out to talk to him and tried to comfort him. It is what it is.”

That is a hilarious quote that Iowa State head coach Steve Prohm is more than likely going to take shit for over the next couple of days.  His team wins a big comeback game against an in-state rival, the fans rush the court, writer Randy Peterson gets a compound leg fracture and Prohm says: “That’s a part of college basketball.”  Did I pull that quote a little out of context because before that he says, “I hate that Randy got hurt”?  Maybe a little bit but he still said in the same breath.  It basically sounds like Prohm is saying there was so much chaos that things can happen.  Like a guy breaking his leg.  But hey!  We beat Iowa and we are the #4 ranked team in the country!  Storm the court, baby! ISU AD Jamie Pollard didn’t do much better when he said, “It is what it is.”

This incident seems to have brought forward a discussion on court-storming (AGAIN) and whether or not it should be outlawed. Listen, I would be the first person to take Iowa State fans to task if they caused a beat writer to snap his leg in two places because they trampled him as they rushed the floor after a big win.  Nothing would make me happier than to rip them to shreds about hurting an old man after beating an unranked team on their own floor. However, the tape might tell a different story than the current narrative of, “These Cyclone fans rail-roaded that poor guy and snapped his leg!  Barbarians!  Outlaw court-storming!  This is a travesty! Ban court-storming this instant!” It would appear that the columnist tripped and fell and broke his leg with no one around him

Now whether or not the writer got trampled after he fell we don’t know. The tape doesn’t show that part. Let’s assume for a second that these college kids aren’t monsters and they side-stepped the old guy on the ground as the celebrated their win big over Iowa. Then this becomes two separate things entirely that aren’t really connected. 1) A guy slipped and fell on his own and broke his leg and 2) college kids stormed the court after a big win. That might be what we’re looking at and all this outrage is fake outrage.  Like I said up top, I would be the first guy in line to say Cyclone fans are monsters for trampling a poor man and breaking his leg if that’s what I thought happened but I don’t think that’s what happened. The people pushing that particular narrative hated court-storming before the game started and saw an opportunity with this writer getting hurt. Let me be clear. Do I think it was stupid for a #4 team to storm the court after beating an unranked team?  Yes.  Do I think court-storming should be banned?  Absolutely not. It’s fucking college. Let these kids do what they want and have some fun. Unless it comes out that some ISU fans stomped the guy out and broke his leg. Then the discussion about possibly getting rid of court-storming should happen. Until then? People need to relax a little bit and look at the facts (which I’m not sure we have all of them yet so I could be totally wrong about all this. YOLO).

PS- Or if you’re Randy Peterson you ignore everything I just said, say it was entirely Iowa State’s fault that he broke his leg and sue them for millions and millions of dollars.  That’s also an option. This is America after all.