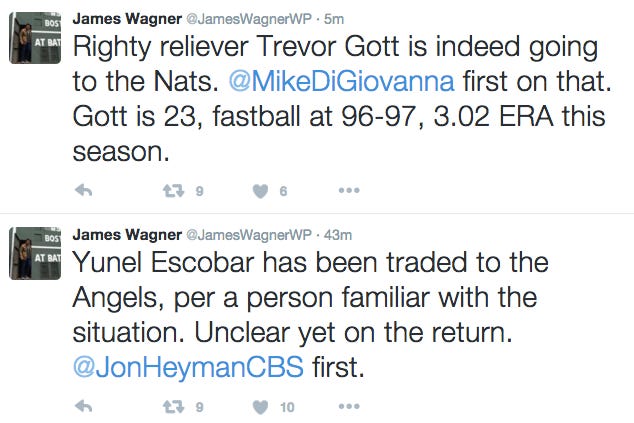 Nats made a splash at the Winter meetings today, trading Yuni Escobar to the Angels for relief pitcher Trevor Gott. Unless the team is preparing to sign Daniel Murphy or re-sign Ian Desmond (for 2nd base), I really don’t understand this trade. Escobar is a better offensive option than Desmond or Murphy and his 2015 average (of .314) is actually higher than replacement Danny Espinosa’s on-base percentage (.311).

The three rationalizations I can see for this trade are:

1. The Nationals had reason to believe that Escobar would suck at 2nd base. Escobar has only started 20 MLB games at 2nd and they were all in 2007. Its a real possibility that he would struggle but a 3B who hits like he does is worth more than an unspectacular young young relief pitcher like Trevor Gott. The value of Escobar backing up Trea Turner and filling in for Rendon during his annual trip to the DL is probably worth more than what Trevor Gott will bring to the team in 2016.

2. Yunel Escobar maybe had some clubhouse issues. Escobar has had some real head-scratchers like when he wrote a gay slur in his eye-black , and he’s often a bit over the top on the field. I doubt that this is the reason that he was traded but I have faith in Rizzo so I just don’t want to accept the fact that it was a dumb trade (which brings it to rationalization 3)

3. It was a dumb trade. Escobar is a good player and his skillset would have been even more valuable to the Nationals this year than last (due to Ian Desmond’s departure) and, while he isn’t a perfect player, he is probably better than Daniel Murphy or Ian Desmond (who will each get paid in free agency). Trevor Gott is a solid young reliever who had a good rookie year (3.02 ERA) and who the Nats will have for 6 more seasons but if 23 year old Gott and his 5.1k/9 nets you someone like Escobar then I look forward to trading 24 year old Filipe Rivero and his 2.79 ERA and 8k/9 for Jonathan Lucroy.

EDITORS NOTE: Sam Alaska was taking 9 hours to write a blog that he has all wrong so I had to cut him off before he spent another 9 hours spewing nonsense. This is a great trade, a steal of a trade. Yuni was good but peaked, hitting way over his career averages, and is getting old. This allows Rendon to move back to 3rd, Trea to start and SS, and Espi to finally get every day at-bats as the 2nd baseman. It’s not exactly rocket science. And holy shit that return. A hard throwing 23 year old who had a 3.02 ERA in his first major league season. How Sam is so dumb to think this is a bad trade I’ll never understand. So close to firing him again.