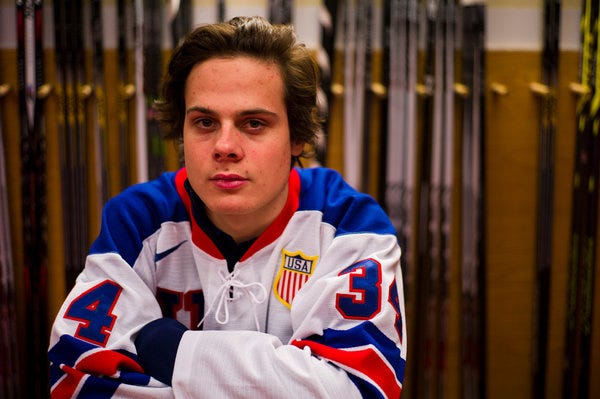 Auston Matthews, who is currently playing professionally over in Switzerland, is without a doubt going to be the #1 overall selection in next summer’s 2016 NHL Entry Draft. If he was just a few weeks older, he probably would have been in the NHL already this year and that draft class of him, Connor McDavid and Jack Eichel would have gone down as the greatest draft class of all time. Anyway, Auston Matthews will be playing for Team USA two weeks from now in the World Junior Championships and if this goal he scored earlier today is any indication, opposing teams are going to have to bring reinforced water bottles with them to Helsinki.

Poppin’ bottles on the reg. And I mentioned this last week when talking about the outdoor game between USA and Canada in the 2018 WJC, but Team USA is LOADED with star power for this year’s tournament. Auston Matthews is currently averaging nearly a point per game with Zurich in Switzerland. And then let’s take a look at the leading point scorers in the OHL currently…

Now team USA hasn’t even placed in the past 2 WJC’s after winning gold in the 2013 tournament. The final roster hasn’t been submitted yet but defensively and in net, there are plenty of older guys who will be leading the way which is exactly what this team needs to balance out the youth that will be taking over offensively. And you’re going to need the defense/goaltenders to really step up the day after Christmas when Team USA opens up their tournament against the Canadiens with the likes of kids like Toronto prospect Mitch Marner and Flyers prospect Travis Konecny. Who are both doing things like this currently…

And that Dylan Strome kid ain’t no slouch either. But with no Connor McDavid or Max Domi in the lineup this year, maybe those damn Canadians finally fall off a little bit.

USA plays Canada on the 26th, then they have Sweden on the 28th, the Swiss on the 30th and finish the round robin with Denmark on New Years Eve.