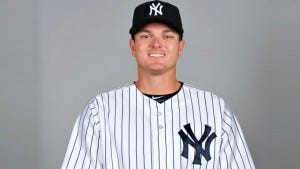 NASHVILLE, Tenn. — The New York Yankees have traded lefty relieverJustin Wilson to the Detroit Tigers for minor league pitchers Luis Cessaand Chad Green. The Yankees made the trade to add starting pitching depth at Triple-A to protect an uncertain major league rotation, whereas the Tigers are adding a solid reliever to an area of their team that has haunted them for years. Yankees general manager Brian Cashman acquired Cessa and Green because the Yankees do not have a lot of upper-level starting depth, which Cashman felt was a bad combination with a starting staff that has a lot of question marks. “They have big arms,” Cashman said. Last season, Cessa, 23, had a 4.52 ERA between Double- and Triple-A, and Green had a 3.93 ERA at Triple-A. Cashman said he liked the idea of dealing Wilson because Wilson is entering his “money-making years”; he is eligible for arbitration for the first time. The Yankees think Jacob Lindgren, their No. 1 pick in 2014; Chasen Shreve; and James Pazos are three lefties who could replace Wilson. “I’m also not done,” Cashman said. “I have a lot of other conversations.”

Yankee fans are becoming my least favorite people on earth. The level of irrationality that I see on Twitter is insane. Non-stop it’s “When is Cashman going to do anything? Why haven’t we made moves?” and the second he makes a move, every person who tunes into 20 games a year is heartbroken over Justin Wilson.  The Yankees of the early 2000’s are gone, and while the rest of the league has caught up in terms of payroll, we aren’t going out to break the bank and move the payroll to be $100mil above everyone else again. There might not be a salary cap, but there is a point where more payroll is not a smart investment for Hal. Over the next few years money will come free, but until then Cashman is working with what he has to build a winning team.

If you look at this off-season, Cashman has made very smart moves:

Now by moving Warren to fill a huge hole, we sacrificed depth at the MLB level. We still have 5 starters and Nova, but in order to make many of the moves that have been discussed, Nova is going to get sent packing as part of a package for a young controllable pitcher. That still gives us 6 starters, in theory, but with our pitchers you know that there will be spot starts. In 2015, 10 different people started games, so Cashman moved Wilson before he went to arbitration to get 2 guys he feels could make starts are the big league level if needed.

Would it be better if this trade got us Jose Fernandez? Of course it would, but we’re talking about Justin Wilson and in the real world, Justin Wilson gets you 2 mediocre minor league pitchers that can maybe make spot starts. Cashman has other lefties in the pen and the farm system to make a trade during the season if they don’t work out, so let’s trust the process that so far has improved the team.