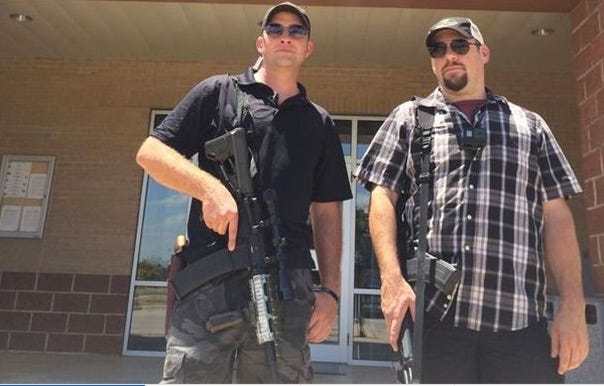 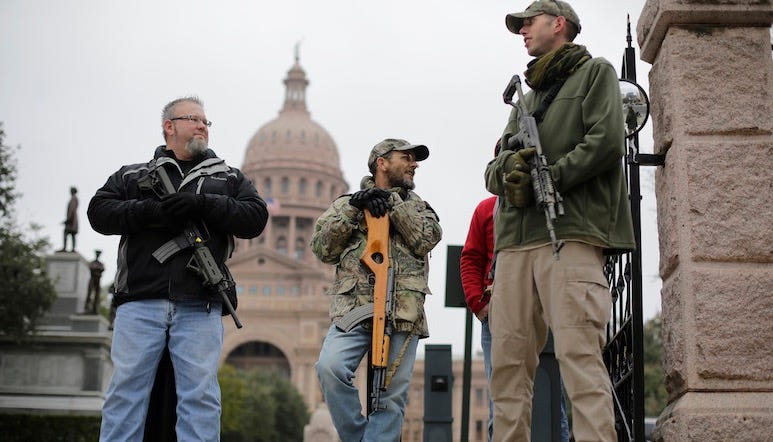 ?
Stateman – Gun rights groups say they will conduct a mock mass shooting this weekend next to the University of Texas campus as part of a demonstration against gun-free zones.

The Open Carry Walk and Crisis Performance Event will involve actors “shot” by perpetrators armed with cardboard weapons, said Matthew Short, a spokesman for the gun rights groups Come and Take It Texas and DontComply.com.

“It’s a fake mass shooting, and we’ll use fake blood,” Short said. He said gun noises will be blared from bullhorns. Other people will then play the role of rescuers, also armed with cardboard weapons.

The demonstration, set for noon Saturday, comes as a working group formed by UT President Gregory L. Fenves is drafting its recommendations on how to implement the new “campus carry” law that will go into effect for state universities in August. The law will allow people with concealed weapons permits to carry their handguns into dorms, classrooms and other public university buildings, though universities may draft some campus-specific rules that can include limited gun-free zones.

Asked if he was worried the demonstration, which will be preceded by a walk through Austin with loaded weapons, might appear in bad taste in the wake of the mass shootings in San Bernardino, Calif., and Paris, Short said, “Not at all. People were able to be murdered because no one was armed.”

UT history professor Joan Neuberger — who helps lead Gun Free UT, an organization supported by many faculty members and thousands of UT students that aims to keep guns out of the UT campus — said putting on a mock mass shooting is an act of intimidation.

“Staging a mass shooting during an anxious time for students — finals week — not only breaks rules but shows real disrespect for the feelings of students, faculty and staff who don’t want to have guns around them in the first place, but will be forced to put up with guns in public places in 2016,” Neuberger said.

I have literally zero, maybe even less than zero interest in getting into any sort of gun debate whatsoever. What I do love to get into is a common sense debate though. And I guess I’m just kind of wondering what happens for the oh, I don’t know, handful, dozen, couple of dozen people who don’t hear the announcement there’s a fake mass shooting going on? God forbid a couple people don’t check their email that day, then stumble into a horrifying massacre on campus. Gunshots blaring at full blast on bullhorns, blood everywhere, people marching with loaded AK-47s on the streets. Maybe they’ll see from a slight distance that the guns the lunatics are holding are actually cardboard…or maybe they’ll see dead bodies in gigantic puddles of blood laying all over the ground and their brain won’t exactly process as quickly as normal. Maybe one of them will just happen to be carrying for real and run in to be a hero and unload an entire clip into a “shooter’s” face. Who knows, kind of a wild card. Just think you’re running the risk of a little “when RPG goes wrong” situation here.

I do like what the ringleader is selling though, that’s for sure.

“We want criminals to fear the public being armed,” Short said. “An armed society is a polite society.”

“We love freedom, and we’re trying to make more freedom,” he said.

Short said the groups began planning the event about a month and a half ago. He said during the march, participants will likely be carrying shotguns, AK-47s and black-powder pistols.

“These will be loaded firearms, but we don’t chamber rounds, and we’re not pointing guns at anybody,” he said. “We regulate one another; we’re all about safety.”

You had me at loving freedom and wanting to make more freedom. Freedom is honestly my favorite thing ever.