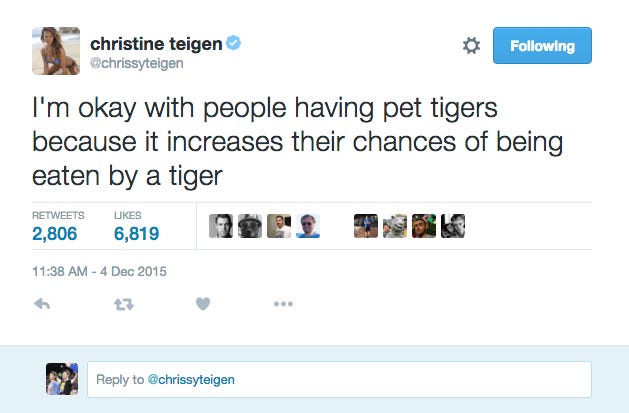 Complex – Believe it or not, Mayweather doesn’t care what anyone has to say about his tiger, though. He just did an interview with Fight Hype about the tiger and responded to his critics. He went as far as to call some of the people who support PETA “hypocrites” and explained that he’s going to be helping a team of people located in Russia to breed and save tigers. “We’re breeding tigers because there’s a shortage of tigers in this world,” he said. “The tigers that are out in the wild are being shot and killed. Human beings are killing tigers for no reason. Before you know it, there won’t be any more tigers in the world. We don’t want that to happen.” Hmmm…OK. That’s noble. We guess. But then, Mayweather was asked about what Teigen said about him on Twitter. He claimed that he doesn’t actually know who Teigen is—wait, haven’t we heard him play that card before?—and downplayed her tweet about him while suggesting that she only sent it out to get attention. “The thing is I’ve never had anything negative to say about John Legend,” he said. “I really don’t even know what his wife does, whoever she may be. I’ve never seen John Legend’s wife in my life. If I did, I probably just don’t remember it. But the thing is this: I’m pretty sure she has a lot going on in her life, but you know, I’m something to talk about, so that can be something else. I am something to talk about. You see, when she spoke on me, she got her name in the public eye, so that’s kind of cool of her. I said this many, many, many years ago. I’m not perfect, I can contradict myself, but I think that people spend too much time worried about what other people are doing.”

In the other corner we have Chrissy Teigen AKA John Legend’s Wife AKA The Portnoy Slayer.

I guess this little back and forth has become a thing now, because Chrissy took to twitter to talk about how everyone is over sensitive and sucks nowadays: 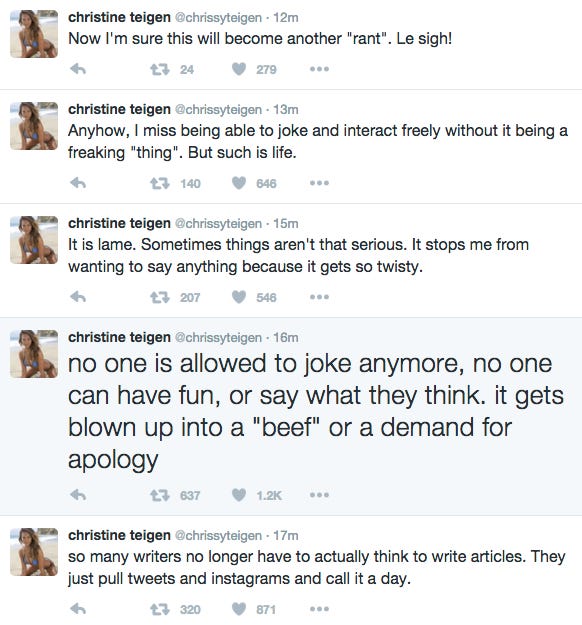 Now, I agree with Chrissy Teigen 100% here. Which is ironic because I literally pulled an instagram and a tweet to make this blog. But here’s the thing

1) I am admittedly lazy so I’m not pretending to be a writer.

2) You cant say you hope Floyd Mayweather gets eaten by a tiger and not expect me to talk about it. A Sports Illustrated smoke implies she wants a large Russian tiger to eat the world heavyweight champion of the world and thats just gonna make headlines. Sorry Chrissy, its just the way it is. Cant talk about people getting murdered by tigers without people like me talking about it.

So, whatever Teigen. It is what it is. But fuck anybody demanding an apology or anything like that. Floyd Mayweather absolutely deserves to be eaten by a tiger. Thats a funny thought. Dont back down from that, Chrissy. Because its like Dr. Seuss said – those who mind Floyd Mayweather getting eating by a tiger dont matter, and those who matter dont mind Floyd Mayweather being eaten by a tiger. Oh and also, FUCK all the PETA people crying about Floyd owning a tiger. That Tiger lives better than 99% of humans on this earth. Forget other tigers. Would you rather be like running around the Russian tundra or hanging out with Floyd at stripper twerk parties eating like a goddam king? Its a no brainer.

PS – Floyd claiming hes stopping the extinction of tigers is some A+ shit.

PPS – Calling Chrissy Teigen “John Legend’s wife” has gotta crush her soul. Chrissy I love you for murdering my boss but admit it, that one hurts.