Fresh off taking advantage of another New York Giants choke job by shredding apart their steaming pile of garbage secondary, the New York Jets now sit at 7-5. Every team in the NFL is through three quarters of their schedule. Let’s rank them heading into the final quarter of the season based on their likelihood of making the playoffs and putting together a January run. For more coverage of Ryan Fitzpatrick and Brandon Marshall embarrassing Dominique Rodgers-Cromartie and Prince Amukamara, check here or here. 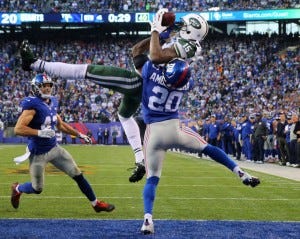 1. New England Patriots (10-2) If Gronk is healthy, they are the favorites. If he isn’t, the Patriots are going to struggle to win a playoff game. It wasn’t pretty last week when Tom Brady was forced to play with a Cam Newton level supporting cast.

2. Carolina Panthers (12-0) Their defense has been a little suspect but 16-0 feels realistic…no matter how many touchdown passes Ted Ginn Jr drops. Cam should be the MVP if the season ended today.

3. Arizona Cardinals (10-2) Arguably the most talented roster from top to bottom in the NFL and they have been able to stay relatively healthy. It will be interesting to watch them in the playoffs without Ryan Lindley throwing up all over himself.

4. Cincinnati Bengals (10-2) My vote for the most talented roster in the NFL but they can’t be higher until Andy Dalton has his Flacoo/Eli run from average to a monster in January.

5. Denver Broncos (10-2) I’m not fully sold Brock Osweiler is as good as everybody thinks he is but they are built to protect him with defense and a running game.

6. Seattle Seahawks (7-5) Anybody want to play them in January?

The Top Of Mediocrity

7. Green Bay Packers (8-4) They are an Aaron Rodgers Tecmo Super Bowl pass away from being in a complete free fall.

8. Pittsburgh Steelers (7-5) The best offense in the NFL when Big Ben is out there instead of Mike Vick’s corpse or Landry Jones.

9. Minnesota Vikings (8-4) Really good defense but feel like the textbook one and done playoff team, unless they get to play whatever the garbage compactor spits out of the NFC East .

10. Kansas City Chiefs (7-5) The Chiefs have a schedule that lends itself to finishing with 10 straight wins after being 1-5 but I’m sure Andy Reid will mess it up at some point.

The Middle Of Mediocrity

12. Buffalo Bills (6-6) Probably need to win out to make the playoffs. If they don’t, I’m sure Rex Ryan will find somebody to scapegoat.

13. Tampa Bay Bucs (6-6) Would be a much more fun team to watch Wild Card Weekend than Minnesota.

15. Houston Texans (6-6) Can they beat the Colts to 8-8 for the right to lose a home playoff game in the first round?

16. Indianapolis Colts (6-6) It seems inconceivable that they have 6 wins until you remember what division they play in.

The Bottom of Mediocrity

17. Oakland Raiders (5-7) A bunch of hype for a team with the same record as the Dolphins…who are terrible.

18. Chicago Bears (5-7) Smokin’ Jay feels like he bought himself another season in Chicago, which is good for entertainment value. 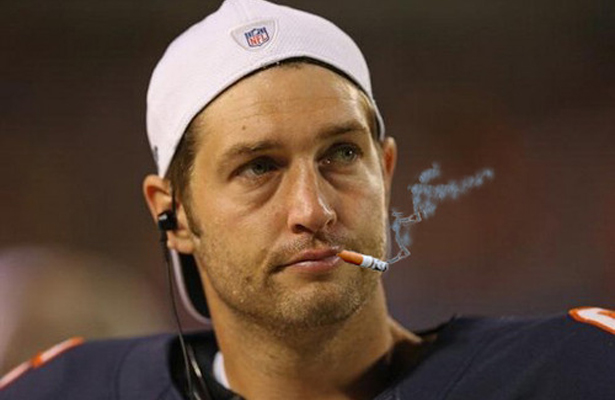 20. Philadelphia Eagles (5-7) Mathematically they are the favorite to win the division right now, despite losing two of their last three games by 1700 hundred points.

21. Washington Redskins (5-7) Going to be awesome when the Redskins give Kirk Cousins a 100 million contract to go 6-10 the next 5 years.

23. Dallas Cowboys (4-8) 4 wins in December and one game out of first place…what a time to be alive.

26. Tennessee Titans (3-9) Chip Kelly going to trade himself to coach Mariota next season?

28. New Orleans Saints (4-8) Feels like the last year of Sean Payton and Drew Brees. How awful is Brandon Browner, by the way?

29. San Francisco 49ers (4-8) The 49ers went from competing for Super Bowls to contemplating giving Blaine Gabbert a new contract this off-season. Life comes at you fast.

Battle For The First Pick

31. San Diego Chargers (3-9) Empty stadium. Everybody is hurt. They are about to move and they used a first round pick on Melvin Gordon…at least the weather is nice.

32. Cleveland Browns (2-10) Johnny Football gets to start and have a few more party pictures of him emerge during the holiday season, so that’s cool.