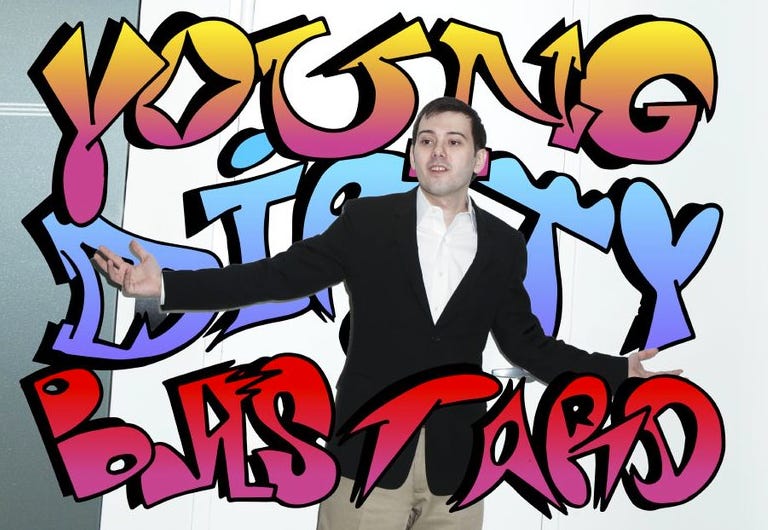 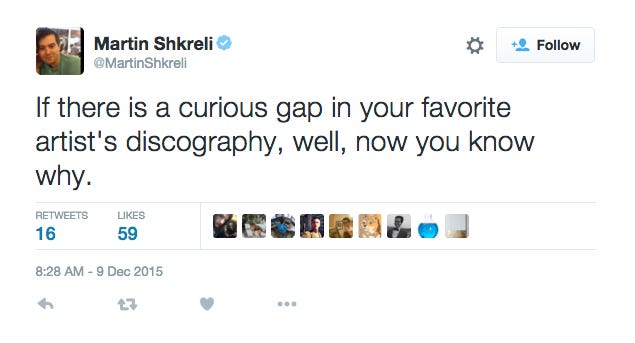 The Verge – Back in March of 2014, rap’s kung-fu-loving storytellers Wu-Tang Clan announced they’d only be making a single copy of their next album, Once Upon a Time in Shaolin, which would be auctioned off to the highest bidder. Despite protests from their fans, and a well-meaning, but ultimately futile Kickstarter campaign to keep the album out of the hands of a millionaire, the album reportedly sold for around $2 million. Both the auction company Paddle8 and Wu-Tang refused to name the buyer, and now it seems like there might’ve been a good reason for that. Because Bloomberg has just unmasked him, and it’s… Martin Shkreli. You might recognize Shkreli as the pharmaceutical exec behind the company that sells the anti-parasitic drug Daraprim, the price of which surged from $13.50 to $750 per pill this fall. He’s largely unliked! But when he’s not gouging the prices of potentially life-saving drugs, Shkreli sometimes finds time to listen to hip-hop. Hey guys, don’t worry — Shkreli can afford Daraprim and wildly expensive novelty albums. Unsurprisingly, Wu-Tang is not thrilled about this. RZA emailed a statement to Bloombergclaiming Shkreli purchased the album before anyone knew he was a terrible human, and that the group donated “a significant portion” of the album’s proceeds to charity. Still, Wu-Tang made a conscious decision to sell an album that they knew only the super-wealthy could afford — it just so happens that this super-wealthy man is almost unanimously unpopular. Wu-Tang has specified that the owner of Shaolin can do whatever he likes with it, and so far, Shkreli has done nothing. According to Bloomberg, he hasn’t even heard it yet. Before they closed the deal, Wu-Tang offered to let Shkreli listen to the album to make sure all the tracks were there, and he sent an employee to do it. Now, Shkreli’s waiting to see if any celebrities want to listen to it with him.

A group of wise young philosophers once told us:

“Cash rules everything around me, C.R.E.A.M get the money, dollar dollar bill ya’ll”

And so its rather apropos that Martin Shkreli purchased the one and only copy of this Wu Tang album for $2 million. Dont get me wrong, Shkreli is a bad human and I dont like the guy, but this couldnt be a better story line. Rap is filled with bad guys and villains. Guys who rap about breaking the law and/or doing terrible things to make money. Thats what Martin Shkreli does. He just takes the hip hop mantra of money power, and respect and he applies it to the pharmaceutical world. The Cocky Croatian. Him being the mystery buyer for this album is a goddam WWF story line. I half expect him to destroy the album so that nobody ever gets to hear it. He’s that spiteful. Buy a 2 million dollar album and then destroy it right in front of Wu and all their fans. I heard Martin Shkreli got his best friend’s girlfriend pregnant, then tricked his best friend into raising the little motherfucker. I heard he called in a bomb threat at the Special Olympics. I heard he took the price of AIDS medication 5,000% and then doubled down and said he wished he raised it even more! Hate Hate Hate Hate!

Bottom line is this story is way more juicy and intriguing now that the Hater of The Year is the owner. If some hip hop head bought it and just enjoyed the music it wouldnt be nearly as fun. Wu Tang claims they didnt know he was a scumbag, but like I said…CREAM. The perfect buyer and seller to make this story of a 2 million dollar album even more ridiculous.