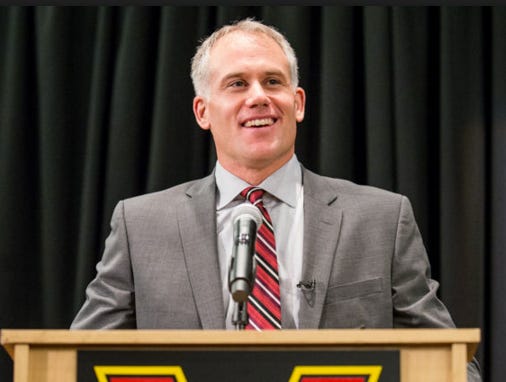 “I’m thrilled to announce four high quality additions to the coaching staff,” new Maryland coach D.J. Durkin said in a press release. “We’re adding a pair of coaches with head coaching experience and a group of guys with track records of being great teachers and recruiters. Their overall body of work speaks for itself as experienced leaders that have a tremendous knowledge of the game.”

London, the 2011 Atlantic Coast Conference coach of the year, is expected to boost Maryland’s recruiting efforts in Virginia after landing four top-35 classes in Charlottesville, most of them fueled by in-state prospects. He resigned after this season, his sixth as Virginia’s head coach after previously winning an FCS title at Richmond and a serving a successful stint as the Cavaliers defensive coordinator. He was among the top names nationally on the assistant coach market.

Shafer is also coming from a head coaching job, at Syracuse. He was fired after 4-8 record this season, after previously serving as defensive coordinator; in 2010 his unit ranked seventh nationally in total defense, allowing only 301.1 yards per game, and 17th in scoring defense (19.3 points per game). He worked with Durkin under Jim Harbaugh at Stanford, where he helped the Cardinal pull off one of college football’s greatest upsets, a win over 41-point favorite USC. He was also the defensive coordinator at Michigan in 2008.

Abdul-Rahim comes to Maryland from Alabama, where he spent the past two seasons in recruiting-focused player personnel role. A Washington native who build from scratch a national high school powerhouse at Friendships Collegiate Academy (D.C.), he played defensive back at San Diego State and brings deep connections to the local high school football scene. He’s already begun recruiting locally this week.

Well god damn if things are heating up down in College Park. Durkin came aboard and the next day had lunch with a 5 star linebacker recruit at Bentley’s. Now he is rounding out his coaching staff with guys with all sorts of headcoaching experience, and top recruiters. Mike London was 2011 ACC coach of the year, an all-star recruiter, and is going to the be Dline coach. Shafer is the D-Coord, even though Durkin will probably run the defense himself since he’s a mastermind. And Abdul-Rahim has been recruiting at Alabama for 2 years under Saban. Not a bad way to start building the coaching staff.

Now add in the Locksley still might stay with the Terps, either as the offensive coordinator, a special assistant, or a front office job. He can’t coach worth dick, but man oh man is he the best recruiter there is. When they do the 30:30 on the Movement, a lot will be about Locks and how he kept the DMV talent at home.

Which then brings us to last night, when wild Lane Kiffin to Maryland rumors starting flying. First DT Adam McClean tweeted “Lane K uhh ohh”, and then this tweet came out from a guy who seems to be connected in Maryland football

So who knows! Everyone thinks Lane is leaving Bama after this year because of the whole “him banging Saban’s daughter” thing, but would he come to Maryland? That would be something else.

Either way, it seems that Durkin is going to do everything in his power to make the Terps dirty again.