(Source) — This is the moment a 19-year-old walks into an estate agents and stabs a man in the head. The victim, who’s left with a blade sticking out of his head, doesn’t realise what’s happened until he feels it poking out of his skull. The incident, which took place in Kazakhstan Petropavlovsk, near the Russian border, on December 7, was captured on CCTV. He was rushed to hospital where he spent a week in and out of surgery. Doctors said the blade was buried one inch into his skull, but did not damage any major part of his brain. Miraculously, the victim is expected to make a full recovery and be out within a week.

I could watch videos of Russians all day, they’re like the perfect mix of superhero, villain, and drunk. I mean who the fuck stabs someone in the head with a fork? And who the hell gets stabbed with a fork and hardly even registers it? Drunk people, that’s who. Those are both extraordinarily drunk person moves. You know when you get too shitfaced and wake up with bruises that didn’t even hurt until the morning? I think that’s how Russians live life every day. Nothing phases you when you were raised in some shit country and lived off rocks and potato vodka. Not even a fork in the head. 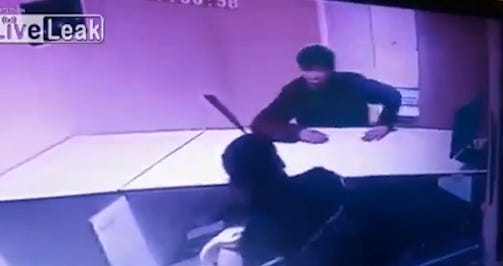