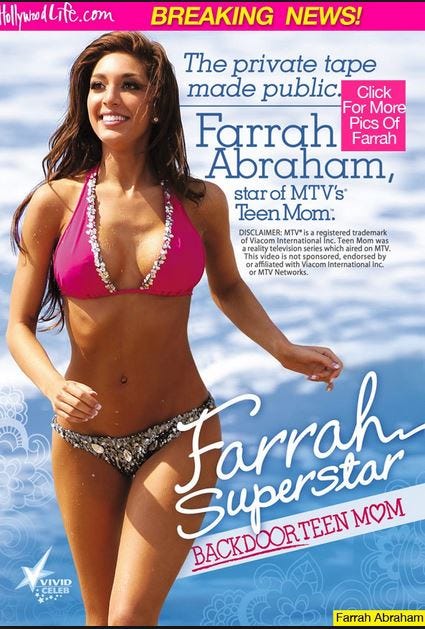 Now, in an interview with the Daily Mail, Abraham still maintains the two had a casual relationship and alleges that Deen was “abusive, pushy and manipulative” throughout. “James Deen raped me for his benefit of fame. He conspired against me with others that I thought were my friends at the time, and that was very hurtful,” she said.

Abraham went on to allege that, at some point during a sexual encounter, Deen drugged her. “I don’t know if he just drugged women to take advantage of them, or what was going on. I experienced extreme anger problems and abusive behavior from Deen,” she told the Daily Mail. “He treated me like he wanted to break me and ruin my career as a reality star-celebrity, as many witnessed. I no longer wanted to be around him.”

Please tell me James Deen paid Farrah Abraham to release this story. That would be the greatest PR move in the history of PR.

Where is KO Barstool when you need em?  Even I’m offended by Farah Abraham throwing around the rape word wily nilly.   Everybody knows you weren’t raped Farah.  It’s disgusting.