So a little backstory here. Former NBA player and Laker Darius Morris went on quite a Twitter binge last night during the Lakers‘ 102-93 loss to the Raptors.  The loss came after Byron Scott announced he was benching Julius Randle and D’Angelo Russell before the game.  I’ll let Mr. Morris take it from here. 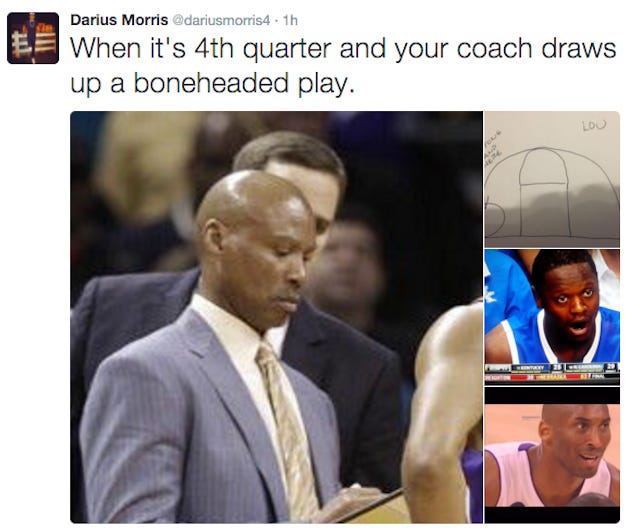 Just a brutal takedown of Byron Scott’s coaching ability last night and the general management of the Lakers team.  I guess Morris thinks that benching Julius Randle and D’Angelo Russell while Kobe jacks 15-25 shots per game isn’t the best plan of action for the Lakeshow.  I mean it clearly IS the best possible way to tank a season away as Ben Simmons dominates at LSU.  But for trying to win games, it seems a little short-sighted.  And it’s great for a former player to tell it like it is.  Jusssst kidding, his Twitter was hacked, guys!

I truly do love how “My Twitter was hacked” has become the new “The dog ate my homework”.  Just ridiculous and overused, but you can’t actually prove it, so it’s OK.  I feel like if your wife walked in on you with another woman, you could use “My Twitter was hacked” to somehow get out iof it.  It’s the “I have A.D.D.” for guys busted using performance enhancing drugs.  No shame in the game.  If Donald Trump’s presidential campaign falls apart, he can take back anything said on his Twitter because “His account was hacked” the last year or so.  Then again, nothing will beat Marshall Henderson’s Twitter excuse after Michael Sam came out.  Simply the GOAT.

Meanwhile, the future of the Lakers seemed to be having a greattttt time during Sunday’s loss to the Pistons.  This video would be infinitely sadder if it wasn’t for Roy Hibbert’s big, dumb face making me laugh every single time.