Here she is. The podcast I’ve been waiting for, the “David Price is officially a member of the Boston Red Sox” podcast. For those who didn’t understand the bunk beds thing during his press conference, it’s obviously a Step Brothers reference. But that was just one of probably hundreds of tweets I’ve sent to Price as part of my recruiting efforts, which did not start once free agency began last month, no. I’ve been planting the seed for Price to come to Boston for about a year and half now, so you’re welcome. Let’s take a trip down memory lane.

It all started with these tweets right here. 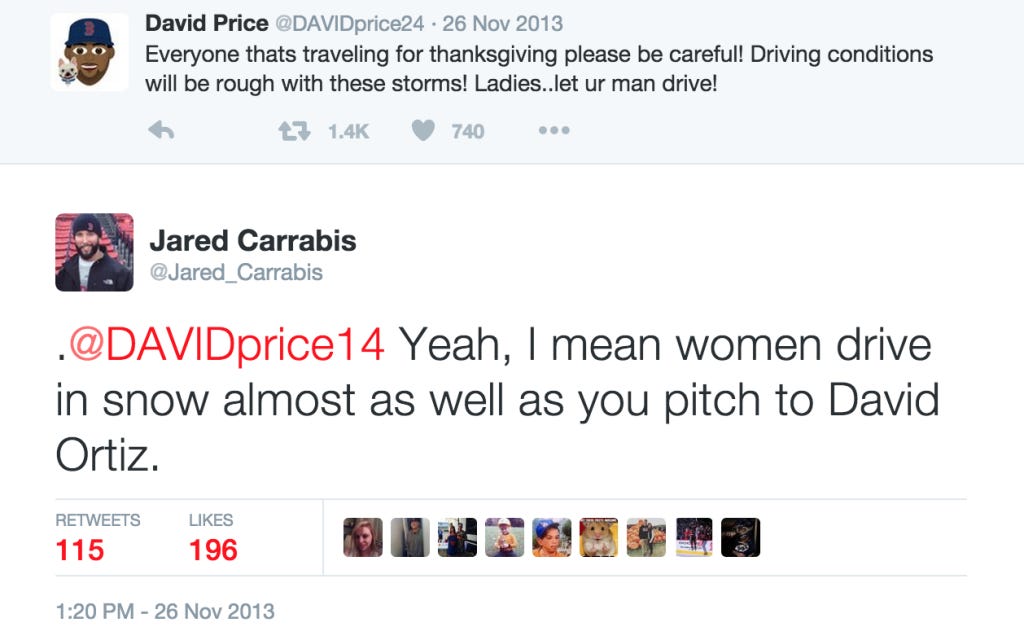 Which, after that last one kept getting retweeted weeks after, eventually got me blocked.

But I continued trolling him even after he blocked me. Didn’t really matter if he could see my tweets or not. I was more just doing it as entertainment for Red Sox fans, which eventually led to him unblocking and following me because he realized that I wasn’t doing it with malicious intent.

So, because he could take a joke, here’s our first Step Brothers reference.

About two weeks after he followed me on Twitter, I began recruiting him to the Red Sox. I put together this bulletproof plan, and he followed it right down to the very last detail.

And after the seed had been planted, I had to water that seed. 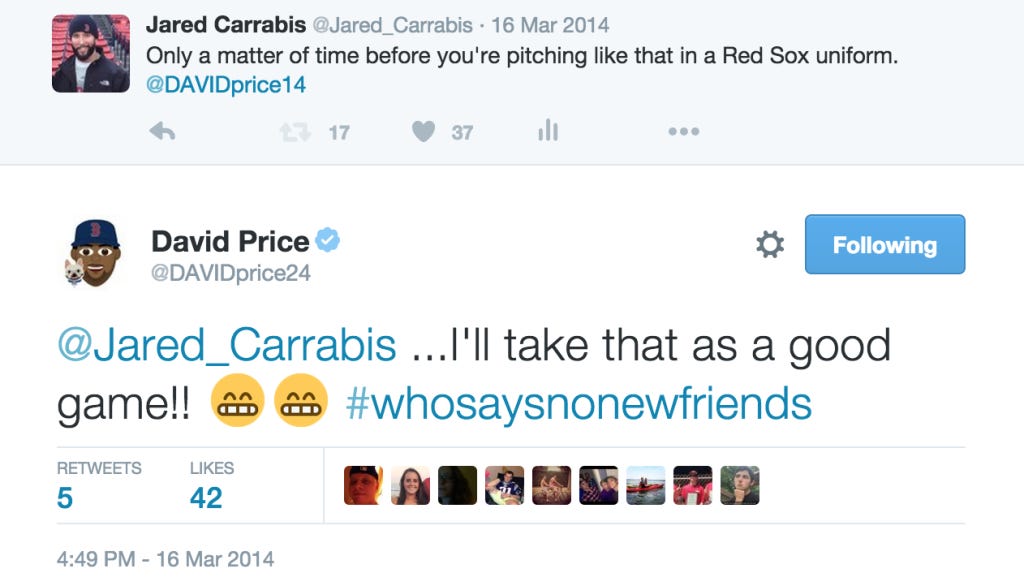 Then we made a bet. As you can see, the bet was that I said David Price couldn’t throw a quality start in his first outing at Fenway Park since David Ortiz took him deep twice in Game 2 of the 2013 ALDS.

I lost that bet. I probably still would’ve lost that bet had I made it for any of his other regular season starts at Fenway Park, where he owns an ERA under 2. And he hasn’t let me forget that since.

So, I slapped him around on Twitter, then he slapped me around with this bet. And just like that, boom we’re best friends.

When I graduated from Endicott in 2014, I had to make a speech at one of the graduation ceremonies, and David Price gave me some public speaking advice. 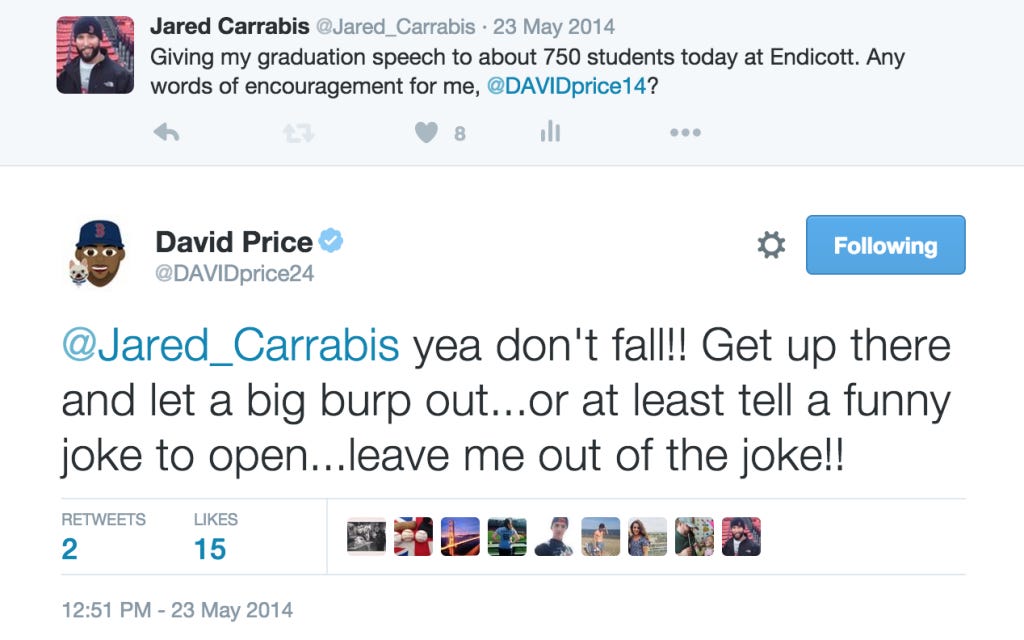 May 30, 2014, the David Ortiz incident game. I was in the pregame ceremony for Red Sox Nation Day as the fan representative for the state of Massachusetts. I let Price know I’d be on the field before the game so he’d have his opportunity to chirp me. It’s only fair. Price got his chirps in, and I had a sign with my name on it that the team gave out for me to hold up during the ceremony. When the camera for the big board panned to me, I flipped it around to reveal that I had written “Boo David Price” on the back. 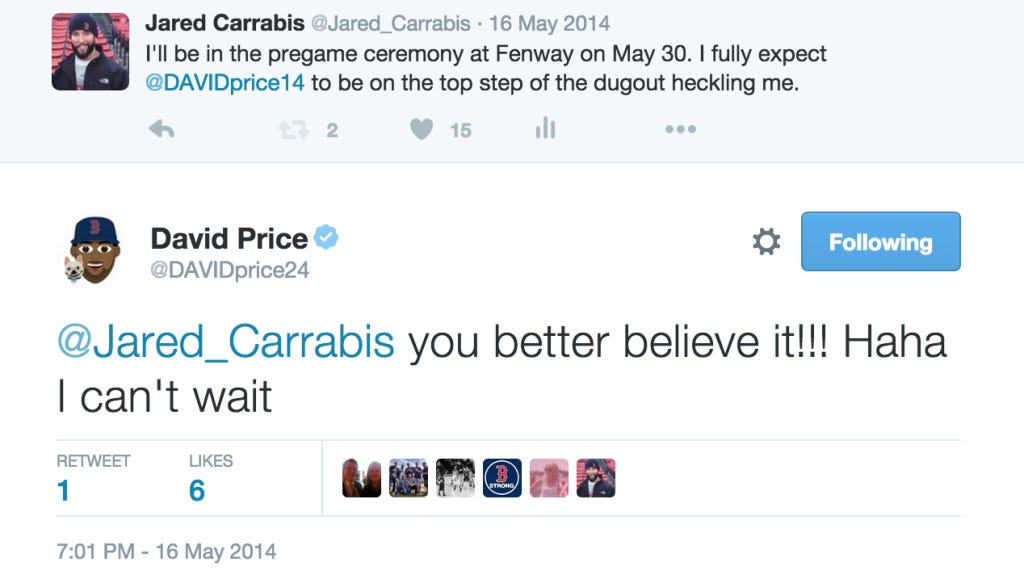 Of course, as we all know, there was the incident between David Ortiz and David Price on the field that night.

Later that summer, I, like most everyone else, was nominated to do the Ice Bucket Challenge. I accepted my nomination, and then I nominated David Price and his dog Astro. Price later accepted to help spread awareness for ALS research for our boy Pete Frates.

After that, boys for life.

Then comes the summer of 2015. Price’s free agency is looming, and I turn up the jets on my recruiting efforts. The night that the news came down that Dave Dombrowski was coming to the Red Sox, I tweeted the picture below. I knew that having Dombrowski in Boston could only help the Red Sox’s chances of signing Price. A few weeks before that, Price visited Fenway Park as a member of the Tigers and told WEEI.com, “I want to be somewhere where I’m wanted by the entire fan base, not just half of it.” I sent him the tweet in hopes that he’d see how many Red Sox fans were hoping that he’d come to Boston.

We get into the offseason, and I immediately whip up, as I called it, the most compelling case for the Red Sox to sign David Price.

After I presented my case, I went right back into full recruit mode. 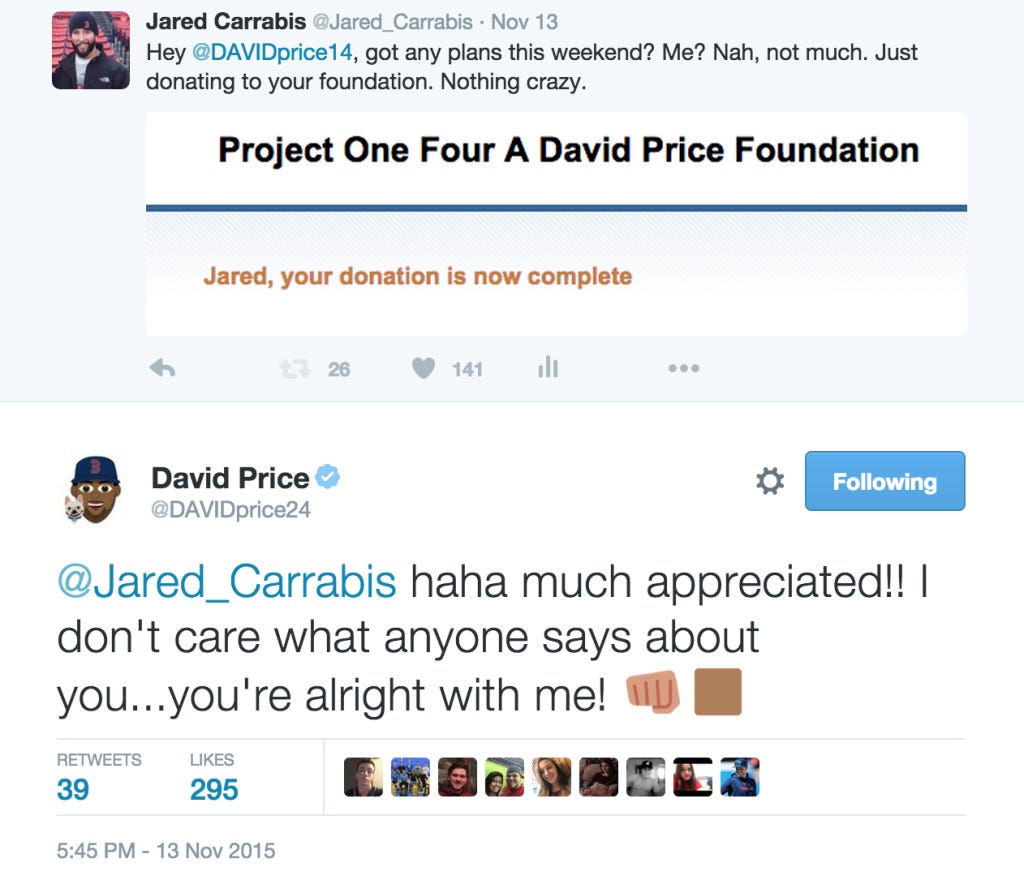 Then, it happens. The news breaks, and David Price has agreed to sign with the Boston Red Sox. Seven years, $217 million.

Which brings us to the press conference. I explained this in the podcast, but in case you haven’t listened yet, I’ll explain here. So, I’m sitting in the second row at the press conference. John Henry, Tom Werner, David Price, Dave Dombrowski and Mike Hazen walk in. It’s as quiet as a library in there. Price looks nervous as shit. Right there in front of his face, there’s the big bad Boston media that, the second the news broke, everyone was wondering if he could handle. I’m watching him scan the crowd, looking at faces, very anxious, then he sees me. I give him the half smirk, head nod. He smiles, as he’s trying not to audibly laugh. They’re about to start the press conference, and it’s basically like in high school when the teacher just handed out the final exam, and your buddy is trying to make you laugh during that awkward silence to get you in trouble.

So the press conference starts, and they present him with his cap and jersey. And no, that’s not Portnoy sitting in front of me. That would be Nick Cafardo of the Boston Globe.

After they finished posing for pictures holiding up the jersey, they get into questions. This was, I’m pretty sure, the last question that he got asked. And it was John Tomase of WEEI.com who asked him how his interactions with Red Sox fans had changed since the news broke that he was coming to the Boston Red Sox. I was sitting directly behind Tomase, who didn’t even finish his question before Price turns and looks at me, gives me that smirk like “this motherfucker right here”, and then answers the question with a name-drop and a bunk beds reference.

After the press conference, he did his thing, met with the media, and all that. But before he left, we got the chance to grab a picture together. It was a picture that was a year and a half in the making.

You can hear me ask him what his good side is. Dude just signed a deal to become the highest paid player by average annual value in baseball history (at the time, until Zack Greinke took over that spot on the same day). Bet your ass I’m letting you get your good side.

And the rest, as they say, is history. Mission accomplished.