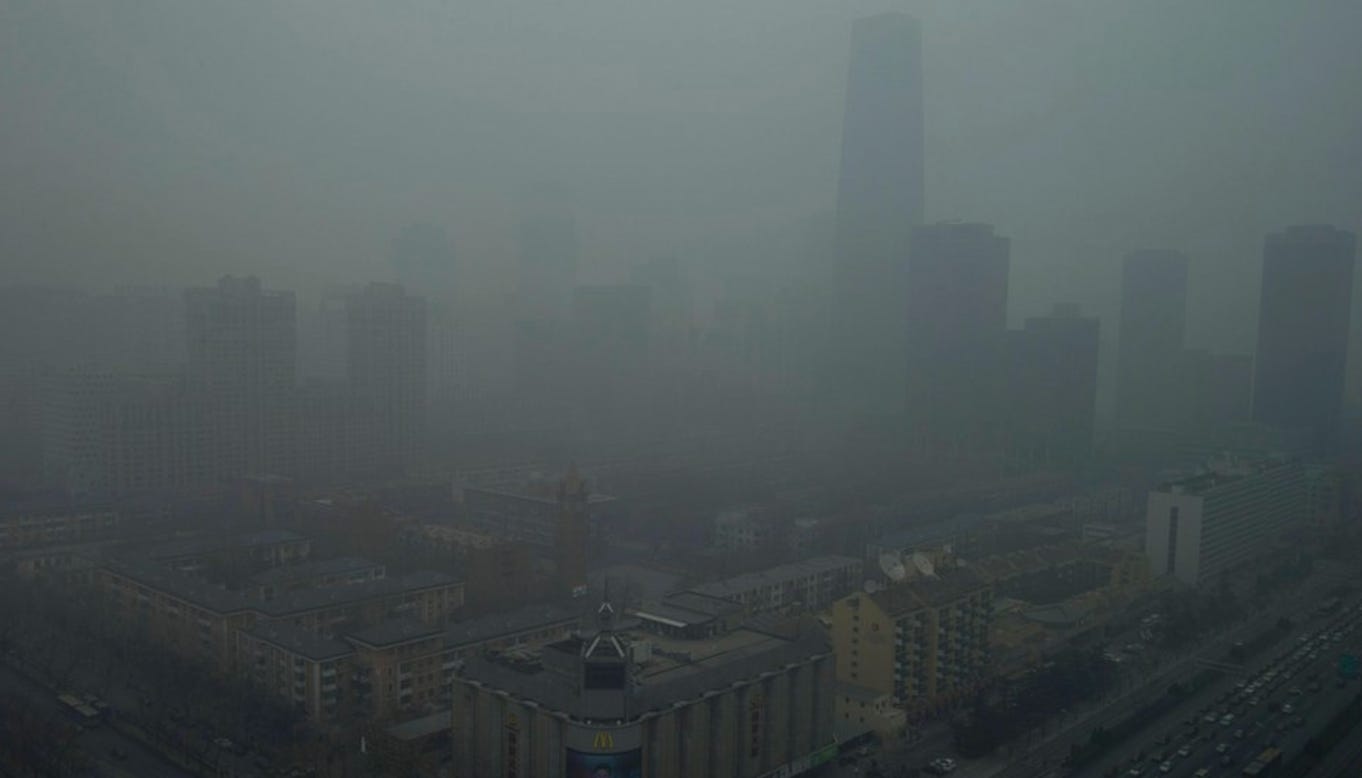 BEIJING (AP) — Beijing issued its first-ever red alert for smog on Monday, urging schools to close and invoking restrictions on factories and traffic that will keep half of the city’s vehicles off the roads. The red alert — the most serious warning on a four-tier system adopted a little over two years ago — means authorities have forecast more than three consecutive days of severe smog. An online notice from the Beijing Municipal Environmental Protection Bureau said it issued the alert to “protect public health and reduce levels of heavy air pollution.” Beijing hotel staffer Fan Jinglong said the smog forecast was “really worrisome.” “We have no choice but to step up preventative measures like wearing a mask outdoors at all times,” he said. Readings of PM2.5 particles climbed toward 300 micrograms per cubic meter on Monday and are expected to continue rising before the air begins to improve with the arrival of a cold front on Thursday. The World Health Organization designates the safe level for the tiny, poisonous particles at 25.

These kids are so fucking lucky.  There’s nothing, and I mean literally nothing, better than school getting cancelled. It’s the best feeling in the world.  I’m an adult now in the adult world (as a blogger it’s not as bad but I still have to do stuff) and no feeling has even come close to the feeling you get as a kid when Mom or Dad peeks their head into your room while you’re sleeping and says, “Hey no school today, you can sleep in.” I haven’t done all the drugs in the world but I’d venture to guess nothing matches the feeling of staying curled up in a blanket burrito after hearing school is cancelled. It’s better than the best sex.  And the great thing about being a kid is you straight up don’t care why school was cancelled. Snow day, freezing temperatures, teacher pinned under a car, bomb threat called into the school, so much smog you might choke and die if you go outside, etc. It doesn’t matter cause you’re a kid and don’t have to worry about real world things. Like, is smog a bad thing and it’s probably going to kill tons of people in the future cause pollution is so bad?  Absolutely but as a kid you don’t have to worry about shit like that. And sure they tack those days on at the end of the year but that’s way far in the future. All you know is you just got a free pass to sleep in past 11am then play video games in your pajamas all day.  God damn it do I miss that feeling.