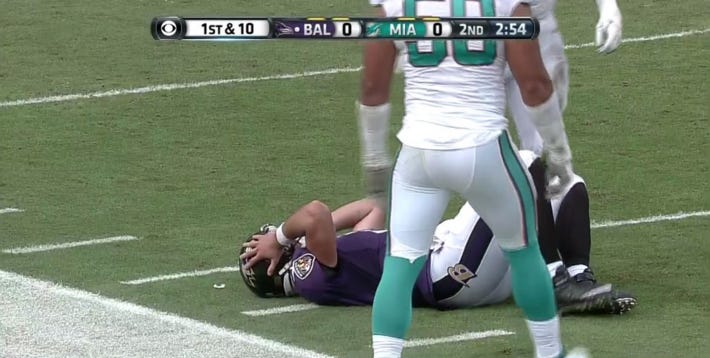 What the Ravens have been able to accomplish this year has been nothing short of incredible. 12 football games. 12 games decided by one possession. I’m not sure what it says about them, but the only thing that matters is that they’ve come up on the wrong side of 8 of em.

What’s surprising is that this may have been their best performance of any of the 12, and they came up short. The Steelers, Chargers, Rams, and Browns wins were all relatively even in terms of yards, first downs, etc. This game wasn’t. The Ravens dominated in TOP (38 minutes of possession), first downs (22 to 8), and yards (375 to 219), but still managed to lose by missing a couple long kicks, committing some costly penalties, getting no help from officials (more on that below), and of course… a Matt Schaub pick-6. More on yesterday’s game:

– Bright spots yesterday including a coming out party for Buck Allen. He accompanied a modest 63 rushing yards with 12 receptions, 107 receiving yards, and a touchdown. His one-cut style and ability to catch the ball out of the backfield fits well with Trestman’s scheme. As long as Trestman’s around, I expect Allen to be a big part of this offense moving forward.

– Is Justin Tucker broken? I feel like ever since that Pittsburgh win, the guy hasn’t been the same. Or at least from deep he hasn’t. 5 straight misses from 50+ deep. He came into the season swapping the “most accurate kicker in NFL history” title with Dan Bailey, but he’s fallen out of the picture. Shame. I guess if he’s going to miss a bunch, do it now. I obviously trust him to figure it out and his job isn’t in danger by any means whatsoever, it’s just been an interesting and bizarre transgression.

– Crockett Gillmore suffered a back injury at some point in the first quarter and was ruled out relatively quickly. Maxx Williams missed the game with a concussion suffered last week, so they were down to just Nick Boyle for the majority of the game. There’s been no update on Gillmore yet, but the fact that an autograph signing he had scheduled for today has been canceled isn’t a great sign. And then news came out today that Nick Boyle has been suspended for the rest of the season for some sort of performance enhancing substance violation. Those 3 tight ends were supposed to be one of the more interesting storylines as we finish out the year, and now we don’t even get to watch that. This season blows.

– Daniel Brown appeared to catch a first-quarter touchdown, but it was flagged for offensive pass interference:

Hmm yeah, sure. Offensive pass interference. Whatever you say.

Okay, so that sets up a 1st and 20. Buck Allen takes a carry and has a hole with room to run… but he’s yanked down by a facemask. Cool, we’ll take our free first down. 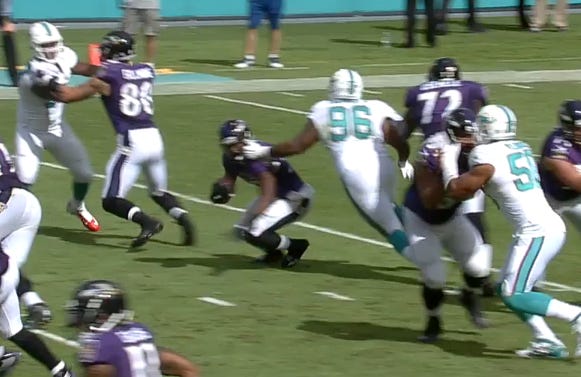 Oh, no flag? Sounds about right.

With how banged up the guys are, the season’s going nowhere. But between this obvious touchdown taken away and a correct call in the Jags game, it’s hard to argue that the Ravens shouldn’t be 6-6. Which would be pretty fitting for a team that plays every game as tight as they have. But we’re stuck wallowing at 4-8. Oh well. Story of the season.

– The defense played a really really nice game despite getting beat on the ground consistently. Held the Dolphins to 219 yards allowed, and only allowed 9 completions. They even got what appeared to be an extremely clutch turnover in a fumble forced by Kendrick Lewis with a few minutes left. Shame that the offense couldn’t get Tucker anything closer than a 55 yard FG attempt. I know the Dolphins are a complete mess on the offensive side of the ball, but it’s refreshing to see the defense pull their weight for once.

That’s all I got for this week. Maybe we’ll do better next week. But probably not. 4-8, in line for the 6th overall pick. 2016 can’t come soon enough.