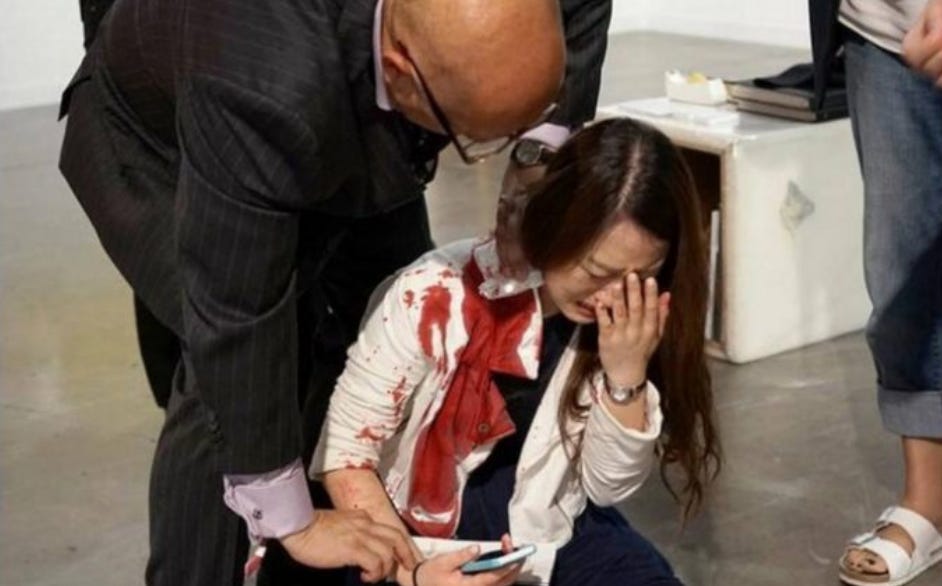 Fox News- One woman stabbed another during a fight at world-famous Art Basel Miami Beach, causing at least one patron to think he was watching performance art. Miami Beach Detective Kathleen Prieto told the Miami Herald the suspect stabbed the victim’s arms and neck during Friday’s fight. She said the victim is being treated for non-life threatening injuries. The suspect was arrested. The fight happened near an exhibit by artist Naomi Fisher. She told the Herald one witness thought it was a performance with fake blood until he realized the blood was real. The paper says others thought the police tape cordoning the area was an installation. Art Basel Miami Beach spokeswoman Sara Fitzmaurice said in an email to The Associated Press Friday, “The attack was an isolated incident that was immediately secured. Our thoughts are with the victim.”

Art is so stupid. It’s so goddamn stupid.  I blame Shia LaBeouf for this. I blame him for blurring the line between reality and “art”. That woman’s blood is on his hands for making people who watched her get stabbed think, “Oh my goodness.  This performance is so life-like.  It’s like she’s actually getting into an altercation and actually just got stabbed in the neck and actually has real blood pouring out of her.  Bravo, I say! Bravo sir!  Encore!  Stab her again!”  Only to find out she WAS being attacked and someone DID make her bleed her own blood with a knife. It is a two-way street though.  You gotta be a pretty big art snob to not step in or lend a hand when somebody gets knifed. Even if you do think it’s performance art that’s still super fucked up.  You should at least try and stop it. You know what happened here? I’ll tell you exactly what happened. People at the art show were concerned it was real but didn’t want to step in in fear it was performance art and they’d be looked down upon by the other art snobs for interrupting such a great piece.  So they all just stood there, thought deeply about how the woman getting stabbed spoke to them and did nothing. Needless to say this happened in Florida.