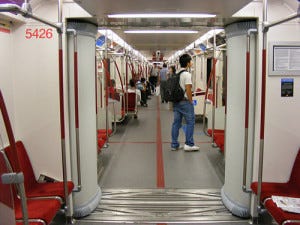 Curbed-  The warnings not to pass between subway cars could become a thing of the past. The Metropolitan Transportation Authority ordered 10 open gangway cars as part of its 2015-2019 capital plan, 2nd Ave. Sagas reported. Open gangway subway trains are several cars-long, but have no doors in between them. A bit like bendy buses. The order was included with the order that includes the R211 subway cars that will replace the existing R46s that operate on the A, F, R, and Rockaway Park Shuttle lines. There is no plan for actual implementation, but the order indicates a willingness to see what’s possible.

There are many benefits to the open gangway design. For one thing, it increases capacity without increasing train frequency. It means people can spread out across an entire train. It’s also great for when you really need to be at the back of the train when you get to your destination, but don’t have time to run there before the doors close.

There are worries about crime, but as 2nd Ave. Sagas’ Benjamin Kabak points out, it’s no longer the bad old 1980s. And while people have raised concerns about subway quality-of-life issues—buskers, homeless people, etc.—along with safety concerns (the MTA has cited tight curves and safety concerns), for many these open gangway trains are long overdue.

Part of me likes this idea.  Being able to move from one subway car to another without risking life and limb is relatively appealing.  And more importantly, I always worried that if ever got thrown off a moving subway train, I would get lost in the tunnels and be adopted by the mole people.  And if there is one group of people I fear in this world, it is the mole people.  Just a group of weirdos living underground in the grossest place on God’s green Earth.

But I hate this move for one even bigger reason.  The way the trains are currently set up allows the smell of a bum to stink up only one subway car at a time.  Under this setup, a smelly/dead bum can stink up a whole lot more of a train, from the first car all the way to the caboose.  Did I have to use caboose in that last sentence?  No, but you are happy I did, right?  Anyway, I haven’t smelled a raw bum in about two years, but I can tell you exactly what it smells like.  That scent never leaves your nose after the first time it enters.