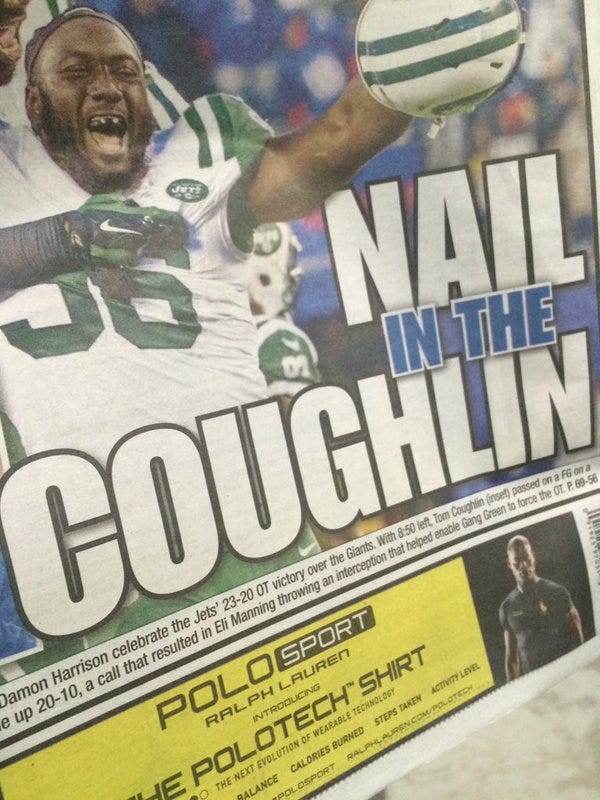 Relax, relax. I’m not gonna do the whole shtick. But its a valid question that we’ve asked basically every year aside from 2 in almost the last decade in this city. Is this finally, actually it for Tommy C? Now lets remember that we’ve been in this situation before… 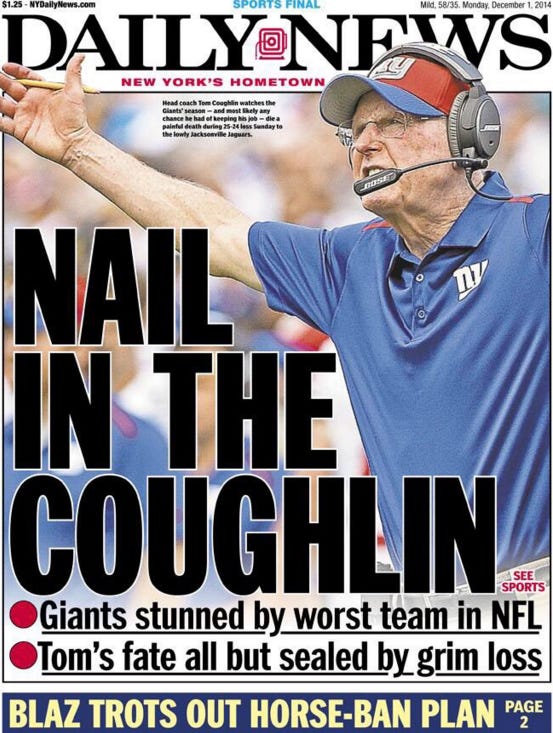 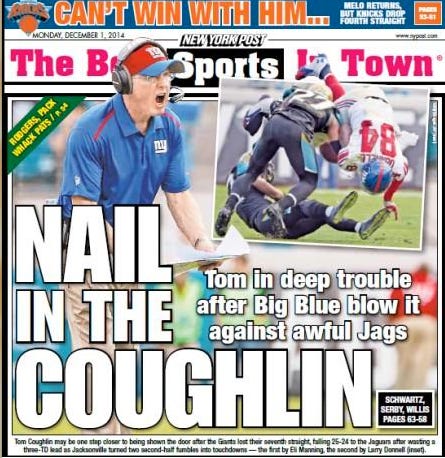 Just like the “A Star Is Born” covers for Sanchez and Geno. The media and the fans have done this before with the Giants head coach. Tom Coughlin is like a greased pig. Just when you think you’ve got him he weasels his way out again. He’s like a cat with 9 lives. Obviously the Mara family sticking with Tom Coughlin over the years paid off in a big way, but eventually the loyalty runs out. And eventually, Coughlin’s age catches up with him.

And losing to the Jets basically directly because because of Coughlin’s call to go for it is the sort of loss that gives ownership and the front office the perfect opportunity to give Coughlin the pink slip. Combining that sort of signature loss with his age, and I think thats its for Coach Coughlin. I saw Coughlin, the Giants, and Giants fans defending the decision last night which is just insane. Going for it in that position is nuts. Up 10 with 8,9 minutes to go, there’s absolutely no reason to risk A) wasting a good long drive and B) Giving the Jets ALL the momentum. The Giants were getting shut out in the second half. Take the points, go up 13, and don’t give your opposition all the confidence in the world. Boomer Esiason said it best – it was basically like a fumble in the red zone giving the Jets new life. And of course there was plenty of football played after that moment and the Giants lost that game for a lot of different reasons, but when you’re up 10 points in the 4th quarter, with an opportunity to go up 13, those players have basically done their job. That should be enough to get the job done if your coach plays it safe there. Of course you can just say it was aggressive and he was trying to seal the game, but thats always the decision on 4th downs. Be aggressive or play it safe. Its not about being macho, its about being smart. And that was not smart.

You also have to tip your cap to the Jets. So much is being made of the Coughlin decision that everyone is overlooking the Jets performance. Yes, I thought the Odell Beckham 72 yarder was Victor Cruz 2.0. The Dwayne Harris punt return TD was a kick in the stomach and his 40-something yard kick off return in overtime was terrifying. 3 different Red Zone trips resulting in only 3 – from the best red zone team in the NFL – felt like the sort of thing that was going to come back to bite us in the ass. But they played a full game to the bitter end and did enough to over come it all. MONSTER day for Fitz-Marshall-Decker. Fitz throws for almost 400 and 2 TDs. The Black Cloud B Marsh with 130 and a score. Decker with 100. Even Bilal Powell with almost 100 and a TD. The defense comes up big enough when they needed to and a little assistance from the Giants being the Giants and the Jets find themselves in control of the 6th seed. Which, right now, at the moment, has them playing Wild Card Weekend against a team called the New England Patriots. Big drama right now in the New York football scene for 2 very different reasons.