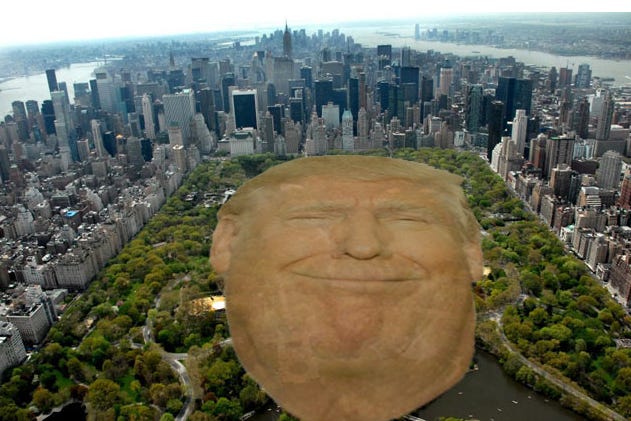 NEW YORK (AP) — Donald Trump is arguably New York City’s most famous resident, and he’s made some of his money off the name of one of the city’s most famous public landmarks: Central Park. The leading Republican presidential candidate first applied for a trademark to use the words “Central Park” on merchandise more than two decades ago, when the park had a far less glamorous reputation than it does today. Since then, Trump has used the nonexclusive trademark to brand furniture, chandeliers, pillows and even key chains. A Trump spokesman declined to say how much Trump has earned from the trademark, but noted the developer’s deep connections to the park. Trump once owned the Plaza Hotel along Central Park South, operates a skyscraper hotel overlooking the park and famously renovated the park’s once-downtrodden ice rink. “Mr. Trump, over the course of his career, has owned and developed some of the most iconic buildings in the city, many of which … sit only footsteps away from Central Park,” said Alan Garten, executive vice president and general counsel to The Trump Organization. Since it is a public space, no one can put an exclusive trademark on the words “Central Park.” But, as first reported by cable news channel NY1, records show that Trump is the single biggest private, for-profit holder of Central Park trademarks on specific goods. It was undeniably a savvy move. His first application came in 1991, when the city’s violent crime rate was near its height and the park often conjured up fears of urban danger. There were 2,154 murders in the city that year, as opposed to 328 last year, and 1991 was just two years removed from the Central Park jogger case in which a woman was attacked and raped while running through the park. The park isn’t the only New York-area landmark on which Trump has filed a trademark. He owns one for “Westchester,” the county north of the city, that was the namesake of a furniture line, and one for “Fifth Avenue,” to label items within his casino business. Trademark experts say it’s difficult to precisely gauge how much a name is worth.

One of my favorite little nuggets in the sports business world is how Pat Riley patented “Three Peat” in 1988 expecting the Lakers won their third straight title. It obviously didnt happen for him as a coach but when the Bulls did it, it was Riles cashing in on every piece of merchandise that used the phrase. Thats still the GOAT when it comes to sneaking in the backdoor and profiting off of something that doesnt belong to you at all, but Trump owning “Central Park” is right behind him. Owning Central Park, Westchester, and Fifth Avenue is about as savvy and cocky as can be. Grabbing the name Central Park in 1991 is the very definition of buying low.

And thats what sucks about Trump going all Hitler on us. If he just didnt run from President and go completely off the deep end, it would be so much more fun to continue to love him. Trumps been a joke his whole life. A very successful joke, but a ridiculous, bombastic, hilarious punchline for everyone to laugh with, and at. Reality TV show appearances, catch phrases, SNL, his hair, his attitude, his twitter. All of it was pure entertainment. Stories like this where you hear that he’s been cashing in on public places in NYC for almost 30 years, you wanna be able to think thats awesome. Pissing off every mayor thats ever come through this town. All that stuff is a blogger’s dream come true.

But its a lot harder to laugh at a guy when everyone thinks he’s calling for a Master Race. Of course I dont really think he’s like Hitler but its a lot harder to be like “Man, that Trump is so damn funny” when he’s on the news calling for social cleansing. You wanna shake him and be like “Alright, this stunt has gone on long enough. Get back to being a real estate mogul and a pop culture icon. Get back to basics.

Its a lot like Portnoy and his Patriots propaganda. Impossible to like the guy when he’s always spouting off at the mouth about some ridiculous New England persecution. Unfortunately, I think they’re both gone forever.