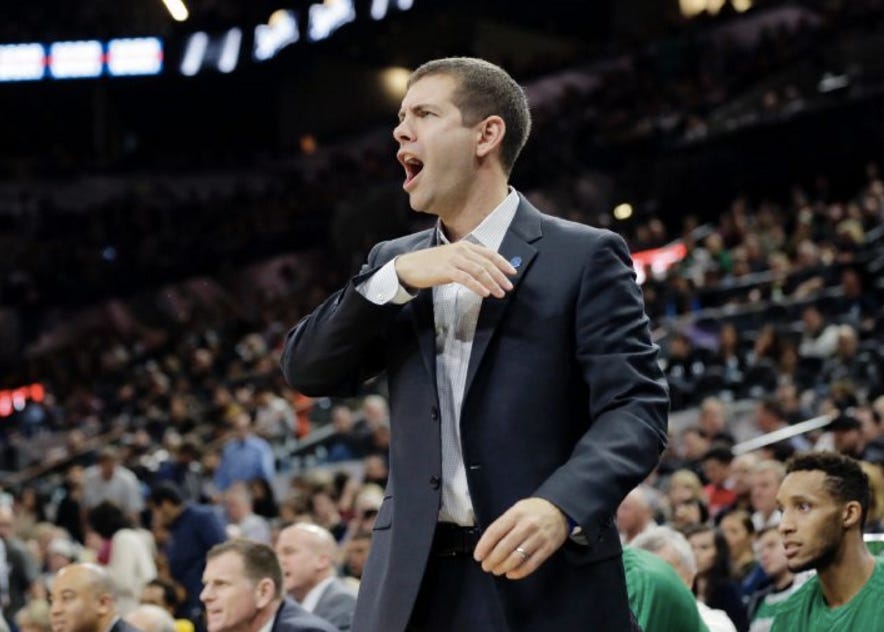 In life, maybe the most important quality you can have as a person is self awareness. Knowing who are you are and what you are capable of is very, very important.  That same premise also can be applied to your favorite NBA team. Plain and simple, the Celtics and Spurs are what you could say, on opposite ends of the spectrum. Anyone with a brain who has watched two seconds of professional basketball knows this. SA is arguably the best team in the entire league not named Golden State, and while improving, the Celtics are still fighting for respect throughout the league. When the Celts began this long road trip, I don’t think there was anyone on the planet who thought this was going to be a game they would win, because again, they’re the fucking Spurs. The way they play the game of basketball is so pure, the ball movement, the cuts, the defense, it’s all stuff that we aspire to. At times the Celtics show glimpses of this style of play, but what sets the two teams apart (besides talent) is the consistency.

This is why I urge you, look at last night’s game with a level head. This wasn’t a situation where the Celts played like shit and lost to a terrible team, nor does this game mean we can suddenly say we are on the same level as the Spurs. To me this was a great learning experience, at the very least an improvement from the first meeting back in November, and should leave you as a Celtics fan feeling better than ever. Is that crazy? Perhaps, but let’s see why maybe it’s not as crazy as you think.

– We’ve seen so far this season that the Celtics are at their best when they actually run an offensive play, and don’t just hold the ball and force a long two. In literally the very first possession of the game, this is exactly what we saw. It’s by FAR my favorite Celtics set, and whenever they run it, it seems to always work. It starts with simple ball movement and a weave at the top of the key, where after passing the ball Avery will curl down and run off a series of down screens. By the time he is coming off that second screen, boom, the ball arrives and he takes a smooth, in momentum jumper that he has been hitting at a ridiculous clip. This play is so simple and when run correctly, a basketball angel gets its wings.

– Speaking of Avery, I loved how he started this game. He hit his first three shots, finished with 12 points in the quarter, and really was the Celtics offense to open the game. Bradley’s strong shooting since his injury has been documented here already, and I think it’s time he starts to be in the conversation for Most Improved Player. Career highs in points (16) 3P% (42) assists (2.1) steals (1.8) he’s been great for the Celts so far this year. Yes, there is more to improve on, but he’s playing with great confidence right now and it’s awesome to see.

– For the third time this trip, we saw a quick start. It all happened in a blink of an eye, but suddenly looking at the scoreboard mid way through the first quarter, the Celts were up 18-8. That was a real thing that happened. It was like they were out Spurring the Spurs. They were taking great shots, causing havoc on defense, and forcing the opposing team to call not one, but TWO early timeouts. We all knew it was too good to be true, but it was great while it lasted.

Everyone enjoy this until the Spurs run

- There are few things about this team that you can say give you absolute confidence, but Brad Stevens calling an inbounds play is one of them for me. Specifically to end the first quarter, things had started to get out of hand, the Celts had blown their 10 point lead, and after Isaiah drew a foul on Danny Green with 2 seconds left, we needed a spark. They called “one”, which they usually run when taking the ball side out,  and it worked to perfection giving Olynyk a wide open layup as time expired. Great call, great execution.

– It was also great to see Jae Crowder continue his strong play. He didn’t miss a shot (5-5) finished with 15 points and two gigantic threes. He’s another player that is playing with super high confidence and he has been a crucial part of their success since Thanksgiving. Defensively he held Kawhi Leonard somewhat in check (4-13 shooting 15 points) and those are numbers I’ll take any day of the week since Leonard is arguably a top 5 player.

– I loved how Isaiah changed his game in the second half. You see he struggled in the first, shooting just 2-6 and really didn’t make an impact. After halftime, he changed his offensive strategy and played with more aggression. He got into the lane, unleashed his ridiculous hesitation pullup, and helped lead the charge back into the game with 19 huge second half points. He finished with 23 points and 8 assists while also leading the Celts in FTA with 9.

– After not really making an impact in the fist meeting back on November 1, Amir Johnson made his presence felt for the second game on this trip. A solid 11/11 while playing 32 minutes (third most for him this season), his inside game is a little better than I expected when they signed him. He’s got a nice little 5-8 foot semi hook shot when he wants to use it, but that wasn’t what really stood out to me. What stood out most was how well he was running the floor. On numerous occasions he as boxing out Aldridge, and then beating EVERYONE down the floor. I have a soft spot for bigs that run the floor, and he is key to the Celtics pace, which is 5th in the league.

– One more quick note on the Celts pace. They crushed SA in fast break points 28-3. Now that’s probably due to a difference in styles, or that SA is about 1000 years old, but damn if that didn’t make me smile.

– Finally, the resilience. This team just refuses to quit no matter the situation. Down by as much as 17 in this game, the Celts STORMED back. They take their punches, get up, and punch the fuck back. The term play to the final whistle really means something to this group, and that is my biggest takeaway from last night. That fourth quarter took years off my life and I don’t mind one bit. When you have a team that plays hard for a full 48 minutes, and is able to make that sort of run against such an elite opponent in a game they had no business being in, the fact that they fell just short is easier to swallow. Remember they did the same thing back in Boston the first time they played, and one of these days they’ll get over the hump, trust me.

– Let’s start early, like right after that second Pop timeout in the first quarter. All the sudden there came the 36-16 run from midway through the first through like the first 4 minutes of the second. The Celts up by 10+ this year usually means a W (they were 11-1 previously), and when you have a team like that on the ropes, you can’t blow that lead. I’d say against almost any other team that doesn’t happen but you know, the Spurs.

– When this run was in full swing, Brad took a good timeout with the score now 50-38 Spurs. We needed to stop the bleeding, but once we inbounded the ball, the Celts had a brain fart, panicked, and it resulted in an ugly forced Avery Bradley 22 foot long contested jumper. I don’t really care that Jae came right back and hit a 3, that play bothered me.

– For the second time this year, the Celts had big trouble with Boris Diaw. The guy is like that big fat guy in your rec league who has elite old man game. He moves at a snails pace, yet always gets to his spot, and the Celts didn’t have an answer for him defensively. They tried Evan Turner (ha!), but Diaw immediately took him to the block with ease. Same with Olynyk. He finished with 16 points and was a team high +12, and frankly I’m not sure what else they could have done.

– Speaking of Olynyk, what a dummy going back to the manbun. I thought we were over this Kelly, jesus. No one respects you with that stupid thing on your head. I’ll say it, you look like a fucking pussy. With the long hair, you are electric, it gives you super powers so how dare you contain it. Let it fly. I’m not saying this was the reason we lost, but I’m not saying it isn’t either.

– SA frontline destroyed Sullinger. The combo of Duncan/Aldridge is just a bit too rich for Sullinger’s blood. He struggles with their length when inside, and when he starts to get frustrated his jumper struggles as well.

– It was also frustrating to watch old man David West just play with more energy and desire than basically our entire frontcourt. He was the key to their big run, chipping in 10 points and 6 rebounds in just 14 minutes without missing a shot. What an asshole he is for taking so much less to play in SA, sometimes shit just isn’t fair. Remember when he turned the Celts down to go to Indiana? Forever on my shit list and that sucks because I drafted him in fantasy every year from like 2005-10.

– Does anyone know what happened to Avery after that first quarter? Who kidnapped him? No points in the 2nd and 3rd quarters, this is one of the downsides of Avery’s game. He can disappear at times, and for no apparent reason. Weird, and bad.

– I think I’ve seen enough from Amir Johnson from three. It reminds me of Sullinger early in his career. Just because you’re open doesn’t mean you need to take it. He’s shooting slightly more of them than he did last year in Toronto, but he’s making just 31% compared to the 41% he shot in ’14. Last night’s 4 attempts were about 3 too many.

– I don’t want to seem like I’m piling on here, but fuck Evan Turner. You want to say its a coincidence that the second he came into the game the Celts lead vanished? Fine whatever. But I hate him because he makes plays like this, as a real life professional basketball player. What an asshole.

So look, does it such that the Celts blew this game? Of course! I wish Brad had called a timeout on that last posession, or that Avery hit that last three. But I go back to self awareness, and I realize that the Celtics had no business even being on the same court as the Spurs, so when I look at the bigger picture, I see the light. The Celts gave up 60% shooting to this team for an entire half, 52% for the game, and they were right there in it till the end. Their 105 points were the second highest against SA this season. I see this performance as a stepping stone, they could have played better, and more often than not in this league and in this conference the effort they gave last night will result in a W.

Next up comes the final game of this road trip, Monday night against the Pelicans. Now even though they are 5-15, they still employ Anthony Davis, and they just beat Lebron and the Cavs on Friday. They also beat this Spurs team. I said when the trip started that I would take a 3-2 trip, and we are one win away from accomplishing that.