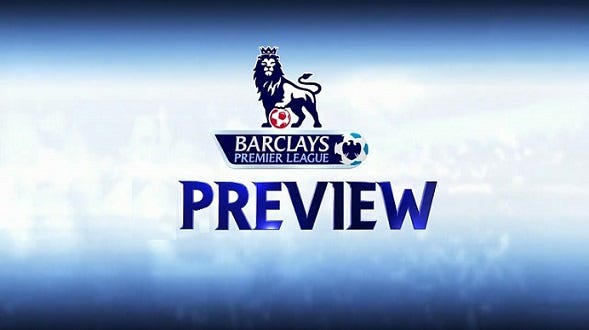 We have reached the point in the season where casual fans of European soccer start getting suuuuuuuuuuper confused about the mishmash of overlapping leagues and competitions/tournaments that are taking place all at the same time, so here’s a real quick, real dirty, perhaps handy little “Soccer 101” breakdown (that those of you in the know can obviously skip):

So for those of you who were confused about the four games that were played on Tuesday and Wednesday of this week, those were in the League (aka Capital One) Cup, which we mercifully will not have to worry about again until next year.

Are there any more questions?

Now without further ado, on to soccuh… 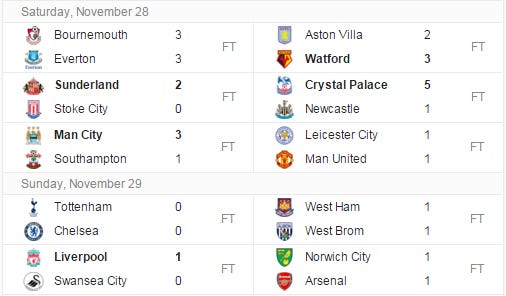 Some news, notes and observations…

– Another game, another goal for Vardy.

– Newcastle fans haven’t left their homes since August, and I don’t blame them. Conceding five goals to a Palace squad that had scored seven goals in its last nine EPL games is….. well, it’s not good.

– The last couple minutes of the Everton/Bournemouth game was as breathless a finish as you’re ever gonna see, and resulted in a well-earned point for the hard-luck Cherries.

– As fun and entertaining as Saturday’s games were, Sunday was the polar opposite, including three unengaging draws and a staid 1-0 win for Liverpool.

– Speaking of Reds, the win over Swans (as ugly as winning at home against a bottom-half club on a questionable PK was) followed by a 6-1 away whupping of Southampton and – predictably – some fans are now thinking they are legit contenders. It makes total sense that Boston is full of Liverpool fans. A couple losses = THE SKY IS FALLING; a couple wins = WE GUN’ WIN THIS SHIT! Be more stereotypical, guys. (You can’t.)

Note: not from the Onion, I swear

– Injuries are really starting to take a toll on some clubs. For example, here a team picture of Arsenal from August: 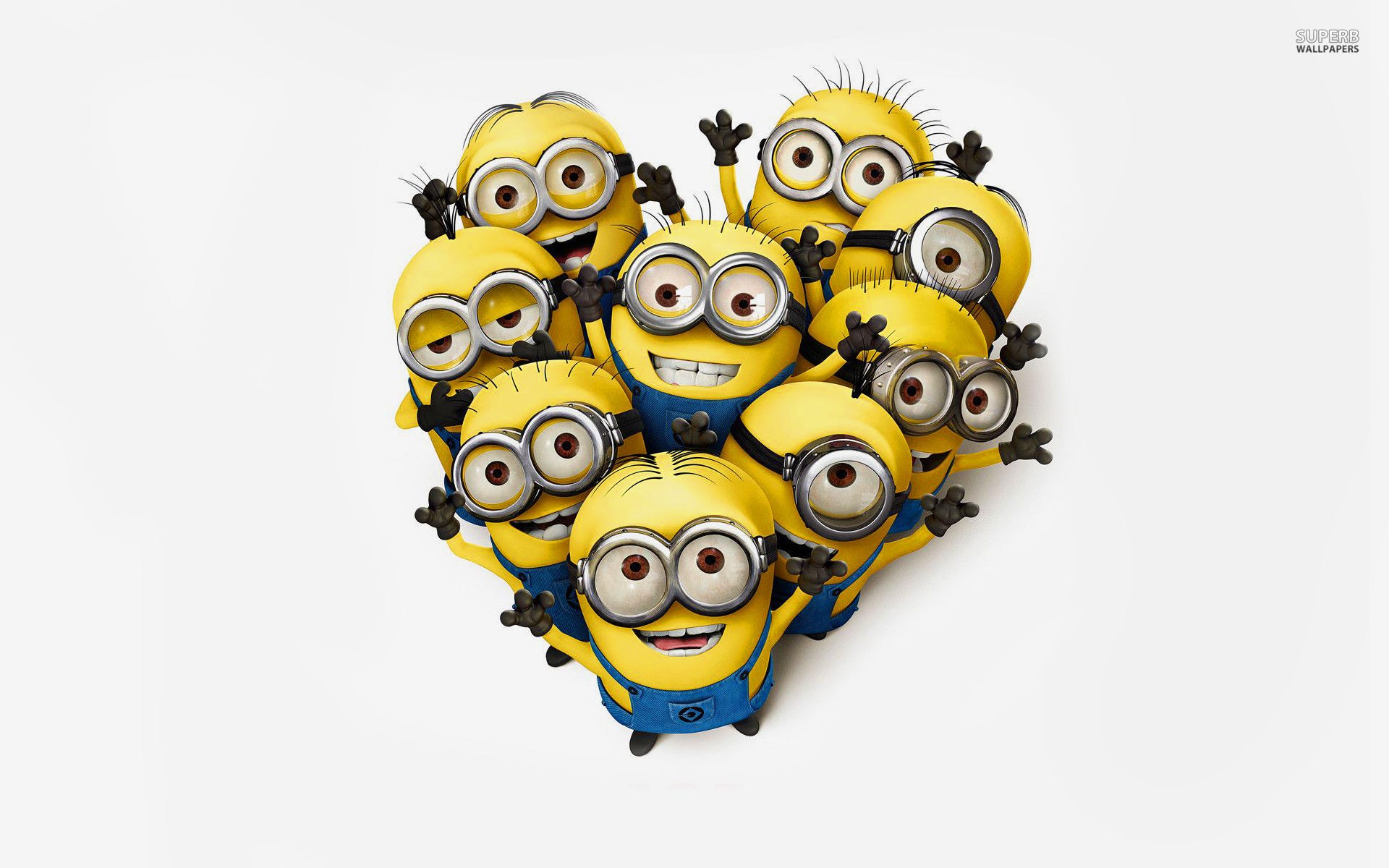 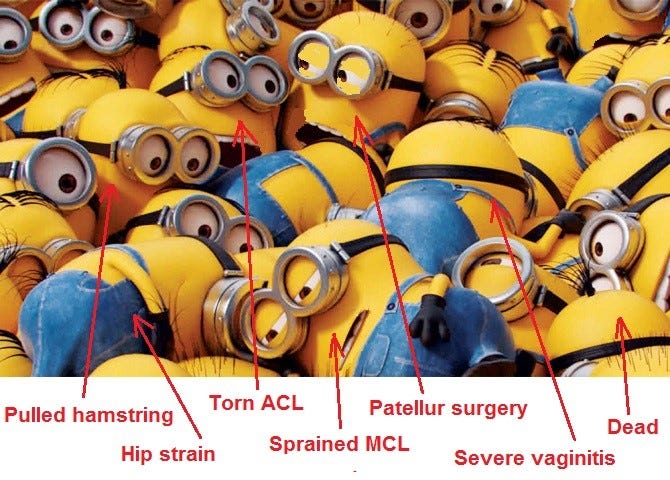 – Don’t look now but Watford has not only played one of the most difficult schedules so far this season, but they have somehow climbed into 11th place while doing so. Tip o’ the cap to you, Mooses… or Hornets… or whatever the hell you are.

Going into this weekend, the table looks like this: 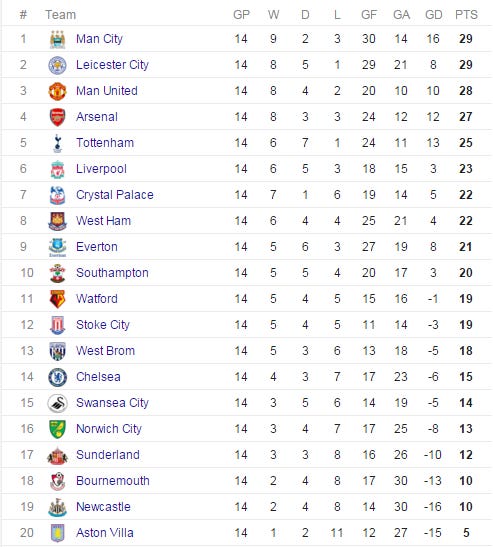 As for the games coming up this weekend, here’s what we got on deck… 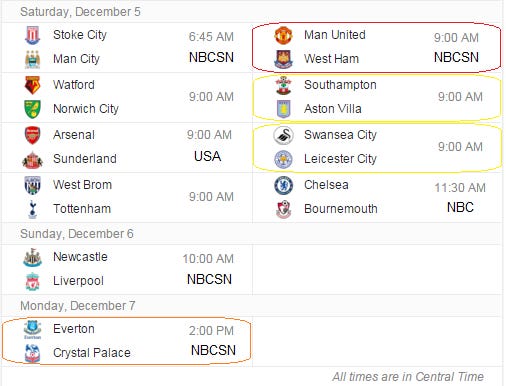 Not gonna lie, bit difficult to identify a “game of the weekend” from this rather tame slate, though NBC’s decision to go with Chelsea/Bournemouth (undoubtedly made long ago, in their defense) is an odd choice. In terms of entertaining, Watford/Norwich will probably be near the top of the list (but not on TV unfortunately) while WBA/Spurs will no doubt be somewhere at the bottom (not on TV thankfully). For our purposes though let’s start with…

United’s offensive troubles have showed little sign of ameliorating recently, but the loss of Wayne Rooney can only help that situation. As for West Ham, the club has hit a shockingly poor run of form just at the moment, but comes in relatively healthy. Calling for United to both concede and score multiple goals in the same game sounds borderline ludicrous, but sometimes you just gotta live a little. Gimme a 2-2 draw. 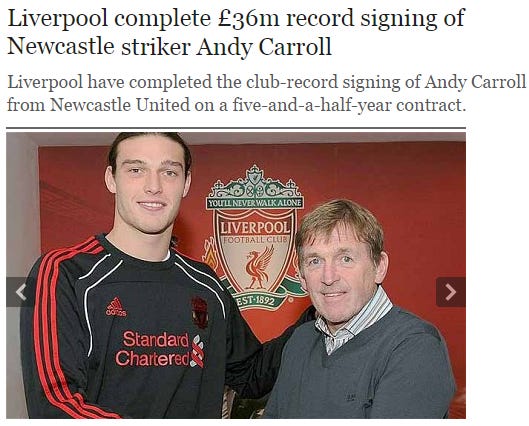 This should be a fun one, with Everton scoring goals left and right and Palace perhaps finally rounding into form (offensively). My prediction is goals, goals, goals… but Lukaku, Barkley and Co. will ultimately have enough to tip the Eagles. Everton to win 3-2. 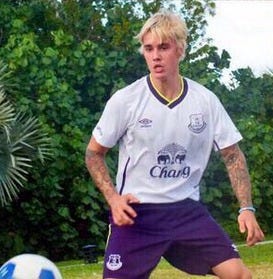 Other games: I’ve been saying that Lester [+170] is bound to trip up at some point for… ohhhh let’s see, since August or so, and yet those foxy little Foxes just keep on keepin’ on. Swansea [+165], on the other hand, has been so poor with virtually no excuse (it has lost less players to injury than any in the league and has played one of the softest schedules thus far) that it’s manager Gerry Monk is now reportedly on the hot seat. Time for the Swans to step up and show some spine. Swans to win 2-1. [Also, this pick allows me to keep alive my seemingly months-long streak of always getting Lester games wrong… #NoDaysOff.] Southampton [-200] has gotten its ass handed to it on several occasions recently, but thankfully gets Villa [+635] at home this week. No better opportunity to find your mojo than against the impotent Villans. Southampton to win 2-0.

Heck of a weekend in Germany coming up with good games galore, starting with an interesting little appetizer on Friday with Schalke/Hannover, but the real action coming on Saturday. 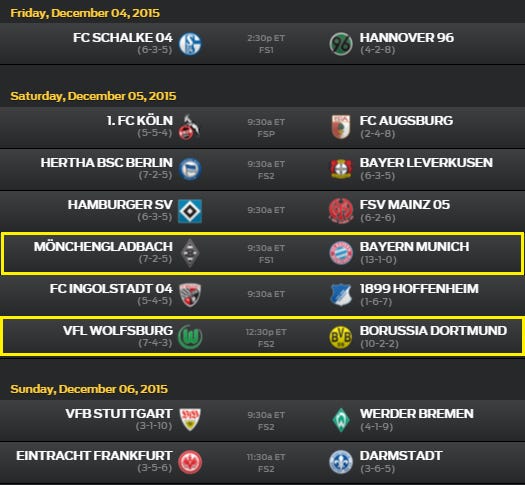 Let’s spend a moment to take stock of how the league is shaking out this season, shall we? Klopp-less Borussia Dortmund has had a fantastic season, including 10 wins (and two draws) in 14 games. In fact, 32 points would put them in first place in England and Italy, and just one point behind Barrrrrrthelona in Spain. And yet they have already fallen to barely within shouting distance of Bayern, which stands on 40 points (13 wins and one draw from 14 games) at the moment. 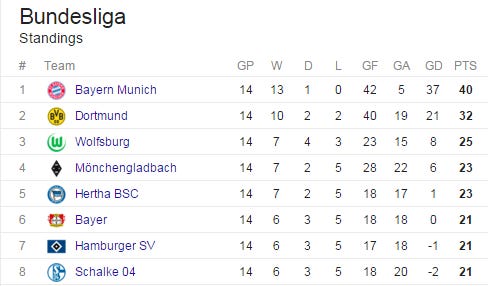 So let’s just go ahead and call a spade a spade: if Bayern so much as draws when they visit Borussia Monchenpenisgladbach on Saturday, might as well pack up the Bundesliga and send the Bavarians home with the league trophy cause the chances of somebody catching them will have just decreased from 0.5% to 0.00000005%. 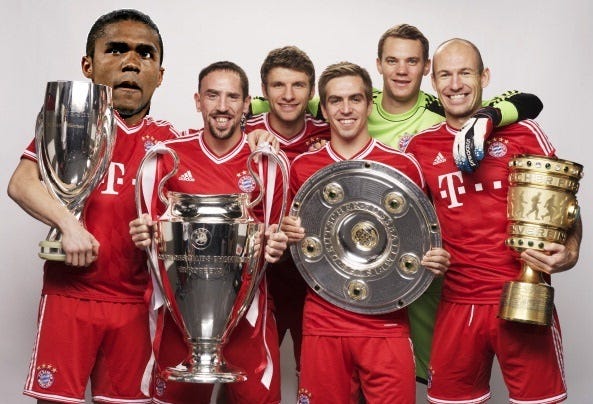 Parity is for poors, amirite?!

BEST OF THE REST

Whereas the Bundesliga may bore fans to death with its lack of drama about who is going to win, MLS has an equal but opposite problem on their hands in the sense that there are hardly any marketable stars involved in this season’s MLS Cup around which to promote the game, not to mention the teams are located in PORTLAND and COLUMBUS, OHIO. Yep.

“But, but, but, but Darlington Nagbe,” stammers the one (and only) Portland Timbers fan in the house. “And, and, and Kei Kamara!” chimes in both Crew fans.

Yes, they are exciting players who finally made it onto Jurgen Klinsmann’s radar and can’t stop scoring, respectively, but – lo siento – neither are going to cause a single casual fan to tune into the game the way that Clint Dempsey or Don Ovan would have. So suffice so league has its work cut out for it to attract eyeballs but, just between you and me, this could turn into a very watchable game between two fun teams… so at the very least try and lobby your bartender to turn that TV in the corner nobody is watching over to it, um-kaaaaaay?

LA LIGA: You think that you have a rough gig? How about Nuno (Espírito – no lie, that’s his middle name) Santo, who guided Valenthia to the Champions League last season and has the club in a solid position to qualify for this season’s UCL knockout stage… and yet he basically got ran out of town because they are sitting in 9th place domestically at the moment. Tough crowd. His replacement is Gary Neville – or Quadruple-N, as I call him – who will take over after this weekend’s game against Buzzsaw-rcelona (1:30pm CT on beIN Sports). Good luck with that, Gary. 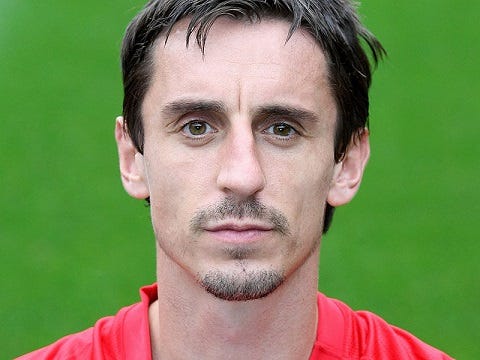 SERIE A: Best game in Italy this “weekend” is GOING ON RIGHT NOW – apologies for not telling you sooner but I wanted to make sure you finished reading the post – as 10th place Lazio host 2nd place Inter (1:30pm CT on beIN Sports).

So there you have it: the best weekly soccer preview that Barstool will ever publish today. Check ya next week when we’ve the final round of Champions League group stage games to get all hot and bothered about.