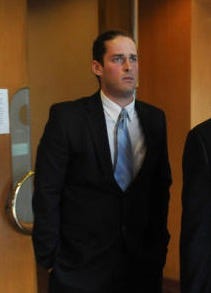 Contra Costa – Should a drunken snooze during a college class be a criminal matter? A College of Marin student is testing the parameters of the issue.

Michael Trump, 25, appeared in Marin Superior Court on Wednesday to contest charges stemming from his arrest by campus police.

The incident occurred at about 6:30 p.m. after authorities received an anonymous tip about a student who was apparently passed out drunk in class at the Science, Math, Nursing Building. The instructor tried to rouse the student and could not.

Campus police arrived and identified the student as Trump, a former student member of the Board of Trustees and elected officer of the Associated Students of College of Marin.

Campus police removed Trump from class, detained him and searched his backpack. The backpack contained a bottle of Sailor Jerry Spiced Rum.

Police conducted a breath test on Trump and got a blood-alcohol reading of .23 percent, which, had he been driving, would be more than three times the legal limit of .08 percent.

In case you were wondering why the courts are always tied up and it takes years for things to get settled, here’s your answer. Apparently we’re arresting kids and making them appear in Superior Court for napping in class. Seriously what the hell? What absolute tool calls the POLICE when someone is napping in class? I mean if he’s a belligerent drunk standing on top of your lecture podium shirtless funneling rum, by all means, do what you gotta do – but peacefully sleeping?

And here’s the thing – you know if Michael Trump didn’t come to this class, the hardo professor would be up his ass and knock points off his attendance grade. So you’re really damned if you do, damned if you don’t. Stay in your apartment and sleep it off and drop from a B to a C, or show up to class hammertime drunk and get arrested. Your only option really is to not get super turnt up at 6:30 PM on a weekday, but the way I see it that’s no option at all in college.

Plus the kid is a freaking biomedical engineering student on his way to med school. Of course he’s got a bottle of rum in his backpack. I was stressed about my workload in college and I was a fucking English major.

Keeping this lawyer’s name in my back pocket, in case I ever run into any alcohol related trouble. Dude is a bulldog.

His defense attorney, Charles Dresow of Ragghianti Freitas LLP, filed a motion to suppress the evidence. He argued that police did not have sufficient cause — based on the sight of a slumbering student and an anonymous tip — to conduct a warrantless search of the backpack.

Further, he said, it is not against the law to fall asleep in class.

“If it was illegal, I would be a real jailhouse lawyer,” he said.

Judge Terrence Boren heard the motion Wednesday and rejected it. Trump returns to court Friday for further proceedings, and Dresow said he will request a jury trial.

“It should be a school discipline issue not a criminal issue,” Dresow said after the hearing. “It should be handled by the school without the necessity of a criminal prosecution.”