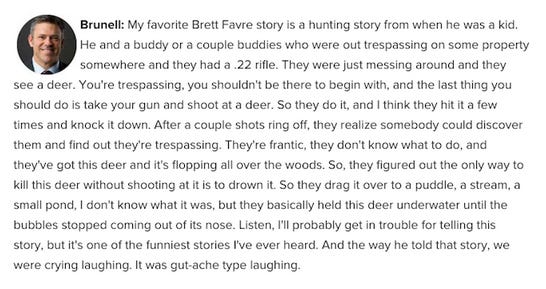 Brett pumping a few bullets into Bambi then drowning him? Well that’s just about the funniest story Mark’s ever heard.

Now listen, I’m not some Snow White animal lover like most of the guys here. I love my dogs more than anything in this world but aside from that I can kind of take or leave animals. I didn’t boycott dentistry when Cecil the Lion got shot and I’m not going to pretend to be up in arms about a teenage Brett Favre trying to put a deer out of its misery but choosing to do it with some enhanced interrogation. That’s just guy stuff, ya know? Little huntin’, couple beers, a Red Man chew, and drowning a graceful creature. Standard bro time. But maybe don’t tell this story to the world? Mark Brunell is basically the drunk Best Man telling the tale of the time the groom got wasted in Vegas and did a bunch of blow then married a hooker. There’s a time and place, dude. Know your audience.