Well it’s official. Didn’t take very long for Mark Richt to land on his feet. Solid coach who got stuck in a rut at Georgia now has a fresh start trying to turn around the U. I’d be excited if I was a Canes fan…and even more so if I was a Canes player: 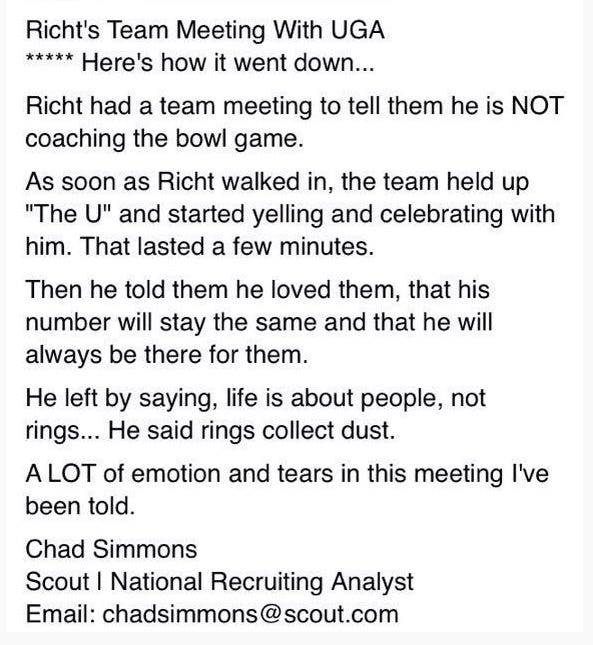 ATHENS — Mark Richt may have had some trepidation Thursday as he walked into the team meeting room at Georgia, about to tell his former players that he would be leaving them immediately, and for another school.

The worries went away quickly.

Before Richt could say anything, Georgia players held their hands together to make the sign of “The U,” as in the University of Miami, the team they knew from press reports Richt was about to take over.

The teary-eyed Richt smiled and made the sign back at them.

This was according to several people who were in the room or were familiar with what happened. The accounts of Thursday’s team meeting described it as “very emotional.” Instead of coaching the team one final time, in its bowl game, Richt told them he would be leaving immediately and assistant coach Bryan McClendon was taking over on an interim basis. Richt told the players his original plan was to take at least one year off, but that Miami – his alma mater – was an offer he couldn’t resist.

According to one account, Richt harped on how much a pleasure it had been to be the lead the Georgia program for 15 years, and that he was going to make sure the Paul Oliver Network – which he set up last year to help players transition into the real world – would stay intact.

Richt also said something that stood out to senior long snapper Nathan Theus, who tweeted out the quote after the meeting:

“Life is about people, not rings. Rings collect dust.”

He’s also got a big time QB possibly following him to Miami. You know what time it is, time to Make The U Great Again.