The Flyers beat the Ottawa Senators 4-2 on Tuesday night and it was a pretty good game if you’re a Flyers fan. However, it had absolutely nothing on the Flyers 5-3 win over Ottawa back on March 5th, 2004 which resulted in an NHL record 419 total penalty minutes after nearly 10 separate fights broke out over the last 2 minutes of the game. Here are all the penalties that were assessed in just the 3rd period alone: 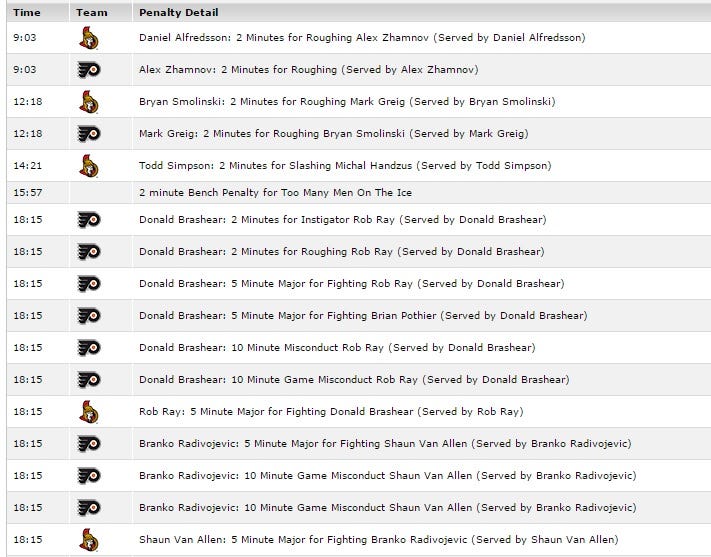 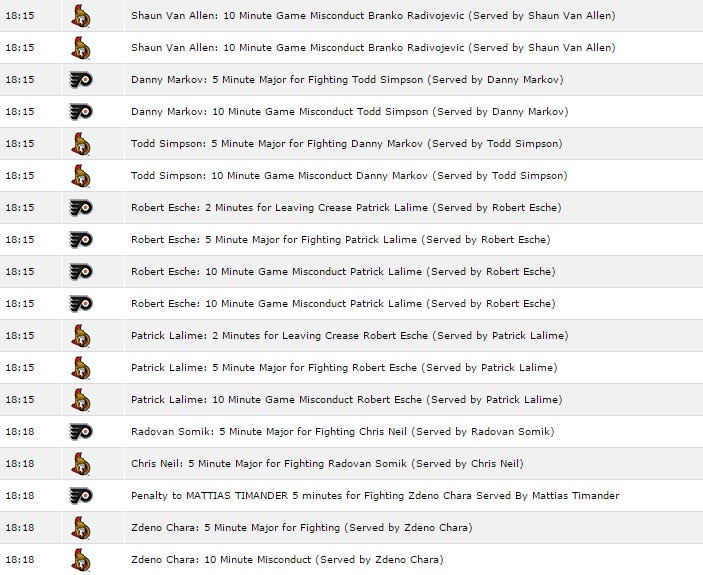 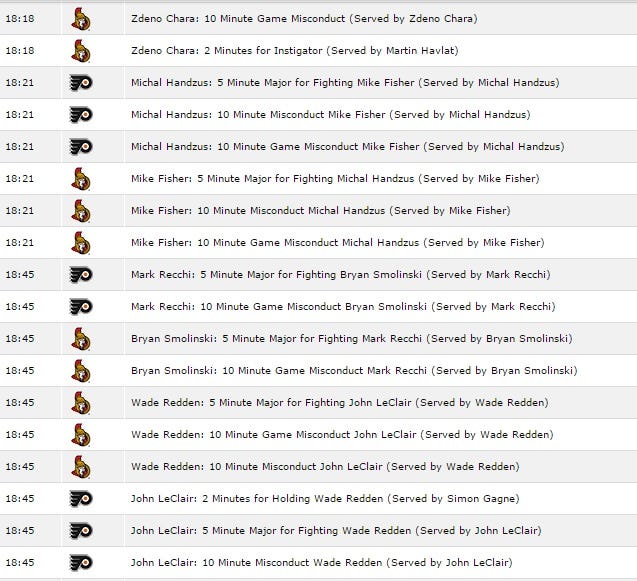 Imagine being the ref that had to file all that paperwork? Probably took just as long as it takes George RR Martin to write a new Game of Thrones novel. Now I’m sure the majority of Flyers fans out there remember the background to this fight but for anyone who needs to brush up on the context a little, it all started the last time the Flyers squared off against the Senators before this. During that game, Mark Recchi ended up taking down Martin Havlat and while the two collided into the boards, Havlat decided to take a swing at Recchi’s head with his steak. Mainly because Havlat is a pussy European. Anyway, Havlat was given a 5 and a game, was suspended for 2 more games after that but the Flyers weren’t happy enough. They wanted revenge and thus setting the stage for the March 5th match up at the then Wachovia Center.

This brawl is what Philadelphia is all about. In front of nearly 20,000 bloodthirsty Philly fans, the Flyers brought back the Broad Street Bullies for a night. You had Donald Brashear starting it all off by going after Rob Ray, and after kicking the shit out of Rob Ray and cutting him up, Brashear was still hungry for more. So he starts going after whoever wants to get their ass kicked next. Then you have Lalime coming down the ice to fight Robert Esche and we’ve got a good ol’ fashion goalie fight on our hands. Now I’ll admit, the one thing I’ve never liked about this fight is that Esche originally went into the fight with his helmet still on. That’s a pretty weak move but whatever.

Then on the ensuing faceoff after that cluster fuck was all taken care of, we had Radovan Somik going after Chris Neil and then that pussy Zdeno Chara going after Mattias Timmander because of course he’d pick the easiest target on the ice. So to sum this up, the Senators had the largest human being in the NHL fight a Swedish guy who doesn’t fight and then their goon Chris Neil fought Somik who also doesn’t fight. Okay, the Senators. Real fucking tough of you clowns.

A few seconds after the next faceoff, gloves again came off and fists again began to fly. This time John LeClair and Mark Recchi went at it against Wade Redden and Bryan Smolinski respectively. Now granted, LeClair and Recchi are both pretty big boys. I mean sure, Recchi was short, but they’re both power forward type of guys who can bring the body. With that being said, they were still the two best players on the Flyers roster and they had no problem with dropping the mitts and scrapping it up. The Senators’ best players on the other hand, Daniel Alfredson and Marian Hossa, were nowhere to be found during any of these fights. Hmmmmm.

Lastly, Patrick Sharp and his beautiful hair went at it with Jason Spezza and his nerdy laugh to end the night’s fisticuffs. But yeah, that was just some old time hockey and it was so insane that the following season the NHL had to implement a rule that if you fight within the final 5 minutes of regulation, each player is to be suspended for the next game. What a night in the City of Brotherly Love.

Speaking of bizarro laughs, I still can’t get over Doc Emrick’s laugh from last night. I don’t know whether it’s the most poetic laugh of all time or the creepiest. I’ll go with equal parts of both.