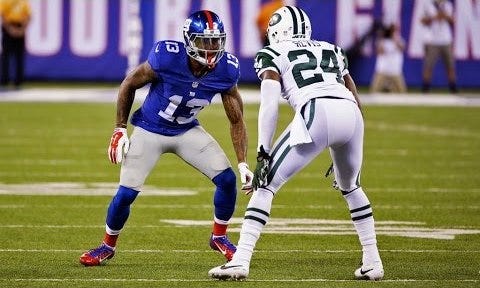 Another Jets practice, another day Revis has been sent home. Obviously the Beckham/Revis matchup is something that’s gonna be hyped by the media even though #24 is on the decline. While it’s certainly a good thing when an opposing defense is losing their best player at a position you attack the most, last week’s game against the Redskins proved it doesn’t matter who is in the secondary. ODB did his part with 142 yards and an extraordinary TD grab but a trio of no-name Washington CBs broke up 8 passes & picked 2 more. Through three quarters, Eli was just 15-34 for 152 yards. The Skins corners absolutely made some plays but that’s not the key to stifling the Giants passing attack. It’s putting pressure on Manning.
Eli’s notoriously one of the worst QBs under pressure. Without Richburg, Pugh & eventually Schwartz there to slow down the pass rush, #10 was erratic & made defending completions easier than it should’ve been. So while some people are happy Revis is most likely out on Sunday, I’m much more relieved to hear that Richburg & Pugh have been practicing. This Jets defensive line are animals & they know without Revis watching their backs it’s on them to make it easier on their makeshift secondary. Richburg’s already being recognized as one of the best young centers in football while Pugh has held his own at guard. Guys like Wilkerson & Richardson generate Jets pressure from the inside, and they’d absolutely eat Dallas Reynolds & rookie Bobby Hart alive. Richburg & Pugh (along with John Jerry) will pose a lot more resistance. Big Blue needs those two healthy in the worst way.
The Giants haven’t lost to the Jets in a regular season game for over 20 years (5-0). Their most recent two wins happened to come during Super Bowl seasons. Christmas Eve of 2011 was the the turning point that catapulted them to the playoffs. After a hard-luck loss to the Patriots & shitting the bed in Washington, the G-Men could use another statement victory like that. Hard to pick a better time for it than in the stadium you share with an intrastate rival that’s got just as much on the line right now. The Jets secondary will be ripe for the picking without their $70M man but if Eli’s hurried all day long, that “statement win” will have been just a pipe dream.