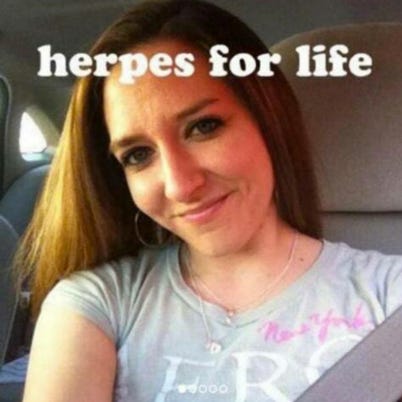 LV – A Las Vegas man was looking for love, but ended with a sexually transmitted disease and now he’s filed a lawsuit. The man is identified as John Doe in court documents. The woman is a Hollywood producer. The two met on Tinder, an online dating app. He says the two had unprotected sex twice and he contracted genital herpes. The lawsuit was filed in the Clark County District Court. He wants at least $10,000 for his pain and suffering. According to the complaint filed in the court, the two had unprotected sex, including once at the Stratosphere Casino & Hotel. He says the woman later admitted she lied about having genital herpes. “What about personal responsibility? You met a stranger. You have unprotected sex with someone. Why wouldn’t you use protection if it was someone you didn’t even know,” said Christopher Reynolds with the AIDS Healthcare Foundation.

Look, I firmly believe in you should do anything you can for a quick buck. This is America, the land of opportunity, where you can sue anyone for anything. Didn’t know that coffee was going to be hot? Lawsuit. Build a bomb, call it a clock, and get arrested because of it? Lawsuit. But this is where I draw the line. You can’t go around suing Tinder hookups for giving you the Herp. That goes against everything Tinder is about, and to a bigger extent, everything America is about. These two folks definitely had some wild, coked up, out of control Vegas sex. Nobody fucks at the Strat and isn’t on some sort of something. And the tradeoff you get is herpes. You can’t just raw dog some Tinder hoe at the Strat in Vegas and then sue when she makes your dick break out in brail. You entered into an agreement with her dirty vagina the second you swiped right, and whatever lumpy presents get left on your dick is on you at that point. If we start allowing people to sue for Tinder herpes, where does it end? This is 2015, a right swipe is basically all the consent you need to do anything at this point. We have to obey the power of the right swipe. Herpes or no herpes, the right swipe is the master of all, which means you deal with the consequences and can’t bring lawyers into it.