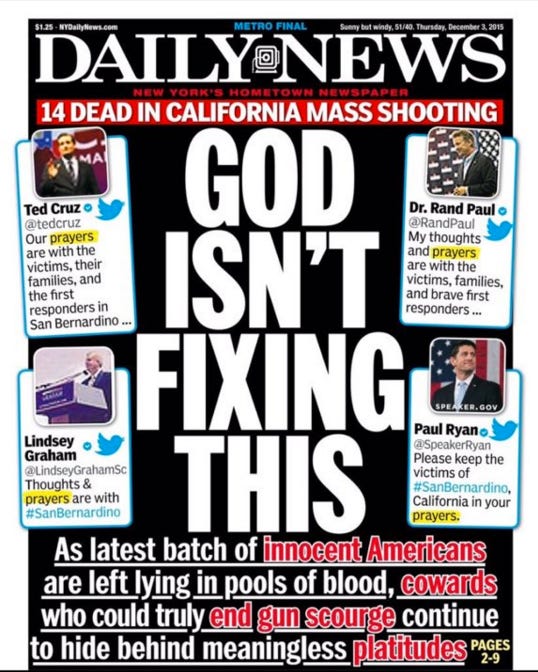 Tell em why you mad, Daily News! Tell em why you mad! We always make fun of the T’s and P’s crowd and but the Daily News just took it to the next level. Don’t get me wrong, I understand that sometimes you want to just offer up some consoling words and there’s only so many different ways to convey it. There’s nothing wrong with a little outpouring of love after a tragedy, even if its just in the form of a meaningless tweet.

But I love the Daily News specifically calling out the politicians for this shit. Treating their prayers like Rick James treated Eddie Murphy’s couch

Fuck your prayers and why dont you start directing your thoughts towards fixing the problem instead of reacting to it after its too late. Leave the hollow “thoughts and prayers” sentiments to regular people and get the fuck to work on stopping this.

Also if you’re still not down for gun control wake the fuck up. How many more mass shootings is it going to take before you assholes realize you’re on the wrong side of this argument? Like at what point do you just give up and realize there’s only one solution to this problem and its getting rid of guns or making it extremely difficult to acquire them? And I’m not even talking about the extremist idiots who make arguments like “Knives kill people! Lets ban knives!” and think they are making a salient point. I’m talking about the somewhat rational people who do have, I suppose, some valid points about guns. At some point dont you just say to yourself “Well, I’m not necessarily down with banning guns but fuck it, we gotta do SOMETHING to stop this from happening over and over.” You really care that fucking much about the Second Amendment (which nobody interprets correctly) that you’re willing to just continue letting this happen? You really, genuinely believe the completely unrealistic, far fetched scenarios where you think you need a gun trumps innocent people dying at an ALARMING rate? For real look me in the face and say you’re willing to risk another San Bernadino or another Sandy Hook just so you can have your firearm toy. Because if you actually think that I think you’re a bad person. The world is a fucked up place and there are some things the general public just are not smart enough, sophisticated enough, and stable enough to handle and one of those things is the ability to by weapons of mass murder. The same crowd who’s pro-gun always says “Can you believe these people can vote?” when it comes to mentally unfit or unintelligent Americans. Yet somehow you’re cool with them easily acquiring firearms? Makes zero fucking sense. Either you eliminate assholes or you eliminate guns, and only one of those things is possible.